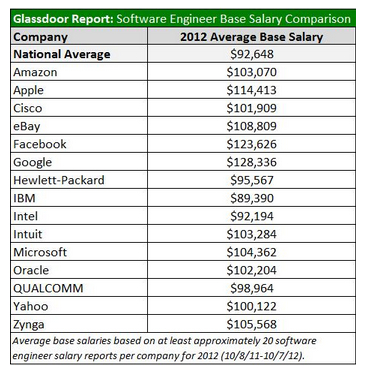 The market for software developers remains red hot. And companies looking to attract the best and brightest minds are paying top dollar —  stressing yet again the need for additional educational resources in the fields of science, engineering and math.

According to a new study out this week by jobs and career site Glassdoor, 11 tech giants are paying on average more than $100,000 in base pay for software engineers. Google led the way with average base pay of $128,336, followed by Facebook at $123,626. 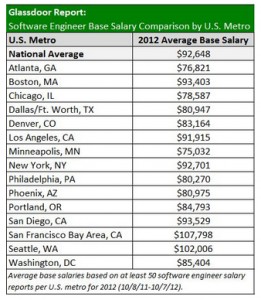 Microsoft and Amazon.com, meanwhile, ranked in the middle of the pack with average salaries of $104,362 and $103,070, respectively.

In Seattle as a whole, software engineers reported an average base pay of $102,006. That was the second highest in the nation, coming in about $5,000 behind San Francisco where the average base pay stood at $107,798.

The national average base salary for software engineers stood at $92,648.

The Glassdoor study follows a report earlier this month which showed that tech workers are making more money than workers in other fields.

According to a report from the Bureau of Labor Statistics, job growth for software engineers is projected to be 30 percent from 2010-2020, faster than the average for all occupations.

Perhaps it’s time to encourage the kids or grandkids to pursue computer science.

Previously on GeekWire: Meet the future: These 21 UW computer science grads are ready to change the world