Damn you, Apple Maps. But not for the reasons you think. 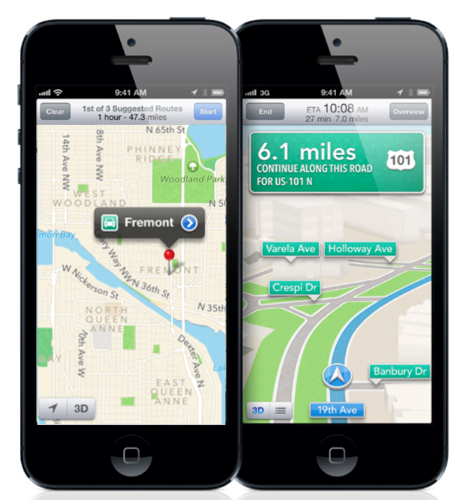 “So, right now, if I asked you what direction Portland was, you really don’t know?” my husband asked me the other day. I smiled and shook my head. He’s plumbed the depths of my directional incompetence for five years and still can’t believe it.

“How about Bellevue?” Nope. “The ocean?” Nuh-uh. “Do you even know which way our house is facing?”

In my whole life I’ve met maybe three people as directionally disabled as I am. We laugh about it, even play a quick game of who’s-the-bigger-klutz. But a quick look shows how we really feel. Confused.

An internal compass is a super power everyone has but me. I thought it was made up until someone clued me in, years ago, that yeah, some people actually do have a rough idea of where they are relative to the world. I’d spend hours trying to find my way out of levels in Wolfenstein 3D in grade school. Coming home from a friend’s house in high school, I got so desperately lost I turned the wrong way into four lanes of one-way traffic headed straight for me. I didn’t want to get in a car again.

The degree to which the Google Maps app rescued me from a miserable behind-the-wheel existence cannot be overstated. When I was a cops reporter in Texas, the heavy Key map in the passenger seat of the Houston Chronicle’s Ford Explorer was all that led me from crime scene to crime scene. Every few blocks, sometimes, I’d have to pull over, flip through the gridded pages, and hope I’d make it before everyone went home.

That shiny blue dot changed everything, but not every part of me liked it.

From route to route, I’ve been conscious of one thing — though I’m going places, I’m learning very little about how. Even on my way back from somewhere, If I didn’t double-tap the compass icon on Google Maps, knowing which way to turn to begin was a 50/50 gamble. The app had given my brain a break in the directional department and no reason to come back.

After I swore off using my phone while driving earlier this year (because, you know, it’s dangerous), I made myself consult the maps app only before I turned on the ignition and not again en route. Because of that, something amazing happened. I started to actually learn how to get from my neighborhood to Fremont, say, without needing the little blue dot to lead the way. After a long hiatus, my brain was back in the driver’s seat.

Then Apple Maps came to the iPhone, and with it, the spoken turn-by-turn directions Android users have enjoyed for so long. I could have kept on with my disciplined self-training, of course, but Siri was too seductive. My phone’s clear rubber case means it can lean securely on my dashboard as Siri calmly and safely tells me not only where to turn, but where to turn if I miss that turn, or if I thought south was north and east was west or just didn’t think at all.

No need to pull over. No need to look at a map. Ever. Again.

Once, Siri told me to turn right and I ignored her. Then she told me to turn right at the next street and I ignored her again. On and on and on, until it sunk in that she would never lose her patience with me. She would never call, like my husband did that time I sent him my location, and tell me I was going the wrong way. Just reroute and reroute, over and over again, to Canada and beyond if I so chose. It’s soothing, this freedom from thought. And scary.

In a third grade aptitude test, the only section I failed miserably was mapping. All these years and trips later, I’m not sure I’d score any better.

The only reason I have not to have Apple Maps on whenever I’m in the car is the battery drain. And something tells me they’re working on it.

A sense of direction is a super power I may never have.