Last week, we wrote about how tech salaries are expected to increase in 2013, and another study is out today that provides more good news for people in tech jobs.

The study, performed by Seattle-based salary data company PayScale, analyzed trends by city, industry, company size and job category. Using data on all private-sector, full-time employees, PayScale found that annual growth in wages is the highest in three years, and especially high for jobs in the IT sector, in the Seattle region and at small companies.

The highest 12-month percentage change from Q3 2011 among job categories was for IT jobs at a 4.5 percent increase. Yearly growth for wages in both the professional, scientific, & tech services and the information, media & telecommunications (which contains software development) industries ranked third among 15 industries with a 4.1 percent increase. 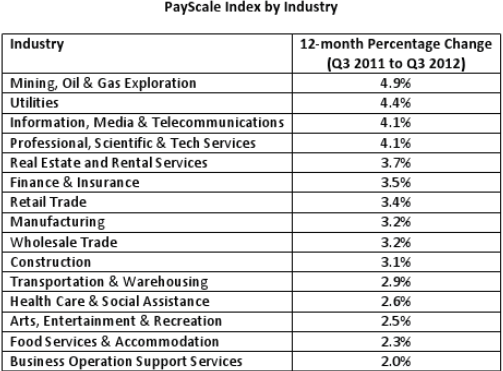 “In today’s economy, employers are not really ramping up hiring, but they want to continue to increase productivity,” Katie Bardaro, PayScale lead economist, said in a press release. “That means they need to incent their current workers to be more productive and ensure they don’t lose top performers. The key to achieving both of these goals are pay increases. Therefore, pay increases can occur without large employment increases.”

Previously on GeekWire: Cha-ching; Tech salaries projected to increase in 2013