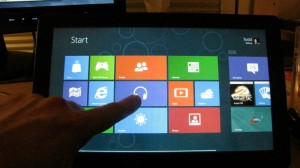 Despite the upcoming launch of Microsoft’s Windows 8 operating system, worldwide shipments of personal computers are now projected to decline in 2012 — the first year-over-year drop since the dot-com bust — according to new data just released by the IHS research firm.

IHS says it expects shipments of traditional notebook and desktop computers to decline by 1.2 percent in 2012, to 348.7 million units.

“There was great hope through the first half that 2012 would prove to be a rebound year for the PC market,” says IHS analyst Craig Stice, in a news release accompanying the data. “Now three quarters through the year, the usual boost from the back-to-school season appears to be a bust, and both AMD and Intel’s third-quarter outlooks appear to be flat to down. Optimism has vanished and turned to doubt, and the industry is now training its sights on 2013 to deliver the hoped-for rebound.”

Apple’s iPad and other tablets have been cutting into sales of traditional Windows-based machines, contributing to the overall decline in PC shipments. Microsoft and computer makers are banking on Windows 8 to help turn the tide, with its tablet-friendly interface.