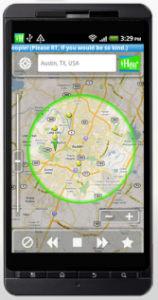 Google News rolled out some new features last week, allowing mobile phone users to find relevant news tied to nearby locations. A Seattle startup by the name of iHear Network is taking that concept one step further, transforming text-based Tweets into an audio news stream of sorts. “It is basically like a location-based chat service,” said Matt Fitzsimmons in describing the technology at the MIT Startup Demo in Seattle last week.

As you can see in the video below, the text-to-speech technology has a few rough edges to work out. (The crowd had a few good laughs during the pitch, and Fitzsimmons took some of the missteps in good spirits). But there’s a bigger challenge in front of iHear. After all, do you really want to listen to what folks are Tweeting about in Ballard or Bellevue or Burien?

There are instances when you’d want to tune in — say an earthquake or a protest or a big sporting event. But, as MIT Startup Demo judge Bill Bryant noted last week, how often do those really occur?

As a hyperlocal news junkie and Twitter fanatic myself, I could see utilizing a tool that transcribed my voice messages into Tweets. I’d also be interested in setting up a personalized “station” to listen to Tweets in the car. (I served as a judge at the event and selfishly asked whether an iPhone app is in the works, and, in fact, it is). But, not sure I am the best example in terms of representing widespread adoption.

Nonetheless, Fitzsimmons and the rest of the iHear crew are pushing forward. The company’s first Android app, launched in February, has already recorded more than 10,000 downloads.

“We are connected alone. We are members of social networks, but we are disconnected from what’s going on right in our community,” said Fitzsimmons, a former consultant at T-Mobile. “You probably know more about what your friend in Florida had for breakfast this morning than you do about what is going right across the street at the diner.”

Fitzsimmons describes iHear as a mix between Pandora– the online radio station– and location-based services — audio Tweets appear on a map.

“We want you to be able to interact with your community. We don’t want you to be distracted by technology,” said Fitzsimmons during his pitch. “Technology should be a tool that helps you get engaged with what’s going on around you. So, this is a first step in empowering to take in the content that it is being created by their neighbors in a sort of citizen journalism-type stream.”

One of six presenters at last week’s MIT Enterprise Forum, Fitzsimmons provided a live demo in which some rather bizarre Tweets emerged. (Also, you can select whether you want to hear Tweets with a British accent). Check it out, and let us know if you’d use this?