Seattle drivers are accustomed to clogged roadways. But a new startup called Zebigo.com is hoping to relieve some of that pressure. In development for the past year, the five-person company plans to tout the new carpooling service at the Fremont Transportation Fair tomorrow, with a formal launch slated for next week. Matching riders with drivers in an economical way will take on added importance in the region come this summer when tolling starts on the 520 floating bridge  — the main corridor by which techies commute between Seattle and Redmond. High gas prices also may encourage commuters to look for alternatives.

How do the costs break down on Zebigo? For a typical 13-mile trip — about the distance between Seattle and Redmond — the rider pays a $5 cost-share to his or driver. In addition, Zebigo collects a 49 cent fee from the rider who pays for a completed trip.

We chatted with founder and CEO Mark Russell, a 39-year-old former aeronautical engineer, to get his insights on how Zebigo could help alleviate transportation woes in the region and also hear some of his advice for fellow startups.

Explain what you do so our moms can understand it: Zebigo.com is a secure, fast, on-demand carpooling website. We’re an eBay or Amazon-style ridematcher. Riders, get a ride now. Drivers, get paid to drive. You both get there faster.

Inspiration hit us when: After 13+ years of Seattle-area commuting, sitting in gridlock, I looked up and saw this river of cars and brake lights all going downtown. I thought: ‘There has got to be a better way than just driving myself…but I need my schedule flexibility…yet, there is so much excess capacity in all those unused seats…we’re all going the same way at the same time.’

VC, Angel or Bootstrap: We are angel and family-funded. As you know, during the 2008-2010 meltdown, VC and angel money became very scarce and risk averse. VC’s want to see large numbers before investing. Most angels are too risk-averse now. Family and friends get it, see the problem, and believe in you and themselves to make investments in innovative ideas.

Our ‘secret sauce’ is: A fast, simple and fully integrated Web and mobile app. Zebigo.com is like a set of virtual car keys: Security features, e-payment system, a great interface and very, very intelligent on-demand matching algorithms and social web integrated. Drivers get paid for basically driving their normal commutes. Riders go when they want.

The smartest move we’ve made so far: Hiring a fantastic development team.

The biggest mistake we’ve made so far: Not launching sooner.

Would you rather have Gates, Jobs, Zuckerberg or Bezos in your corner: We’d like to have any one of those guys ride or drive in the system, that would lend some serious visibility. I’d be happy …. with Mayor McGinn right now. I worked for Jeff Bezos. He’s brilliant and creative and would have a million ideas on how to market and grow the system. Zuckerberg could help us spread the word with the social media leverage. 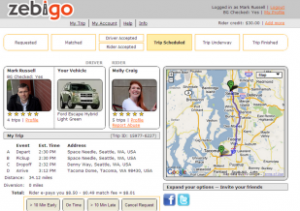 Our world domination strategy starts when: As we launch the Zebigo user community will decide how far and fast to push this. It’s up to each and every one of us to solve traffic, and stop wasting our time, money, and oil idling in gridlock. The entire world from Seattle to Beijing has horrible gridlock. Change begins with us. Plus, who wouldn’t mind making money while commuting?

Rivals should fear us because: Our team members have lived and worked in every major metro area that we are launching. We are part of the local community and we will win the hearts and the minds of the natives as they use it. Zebigo is super intelligent. You don’t need a million active people in each city to get the ride you want. You click and go.

We are truly unique because: We built a simple to use, fully integrated system that is a solid foundation for intelligent ‘ridefinding, matching, and e-payments. Zebigo dynamic rideshare is the start of something huge.

The biggest hurdle we’ve overcome is: Funding. We’ve spent a lot of money developing Zebigo. We’ve had to dig deep in our pockets as well as our angel’s and family’s pockets to fund this right. We’ve put in a lot of sweat equity. Nothing that aims to solve big problems is free or easy. I’m sure there will be more hurdles & opportunities.

What’s the one piece of advice you’d give to other entrepreneurs just starting out: Plan to build your business incrementally, keep it simple, and focused at its start.