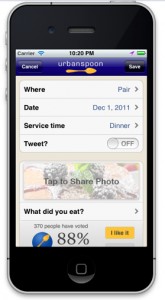 Have you ever wanted to remember that great sushi place in Seattle or the crab bisque you ate at a seafood restaurant in San Fran? Urbanspoon today is rolling out a new update for iPhone users that essentially allows individuals to track where they ate over time, including the dishes they purchased.

Urbanspoon’s Conrad Saam described it as kind of like a “check-in, but less public.”

“We’re not trying to push anyone to be Mayor or Duke of anything,” he said.

That’s a reference to FourSquare, the mobile check-in service which is largely built around the idea of creating public leaderboards. (Interestingly, that’s an idea which was just touted earlier today by Avvo, the Seattle online lawyer and doctor Q&A site).

Urbanspoon’s new iPhone update isn’t about publicly broadcasting where you eat, but more of a database that restaurant-goers can use to track the restaurants or cuisines or neighborhoods they like.

Based in Seattle, Urbanspoon was sold to IAC in 2009.