Looking for a wireless provider, but not sure where to turn? A new study from J.D. Power and Associates may provide a little bit of guidance. And not a huge surprise here, but the study found that Verizon Wireless has the most robust wireless network in the West, while AT&T has the worst.

More than 22,000 people were surveyed as part of the U.S. 2011 Wireless Network Quality Performance Study, which found that audio and phone issues (such as dropped calls) outpaced data issues like email, text messaging and Web browsing. Interestingly, those calling problems remained high even as people use their phones less for talking. (A decline of 77 minutes per month since 2009).

J.D. Power conducts its survey based on “problems per 100 network connections,” with a lower score actually indicating fewer issues. And Verizon topped in every major region except the North Central states where U.S. Cellular performed best. (Verizon ranked second in the region, made up of states such as Illinois, Indiana, Ohio, Michigan and Wisconsin).

Verizon earlier this week announced that it has spent $94 million on network improvements in Washington state in the first half of this year, part of an overall $1.3 billion upgrade that it has rolled out since 2000. That includes the company’s expansion of a long-term evolution (LTE) network, a super fast mobile broadband effort designed to compete with Clearwire.

Of course, as we’ve pointed out in the past, wireless network performance often is impacted by your specific location. A strong signal from Sprint or T-Mobile in Bellevue may not translate to Ballard. (Or CenturyLink Field for that matter).

Nonetheless, the regional outlook is important since wireless customers do not sit in one spot. As the chart below shows, Verizon had just 11 problems per 100. That compared to AT&T’s 16 problems per 100, which was the worst nationwide. 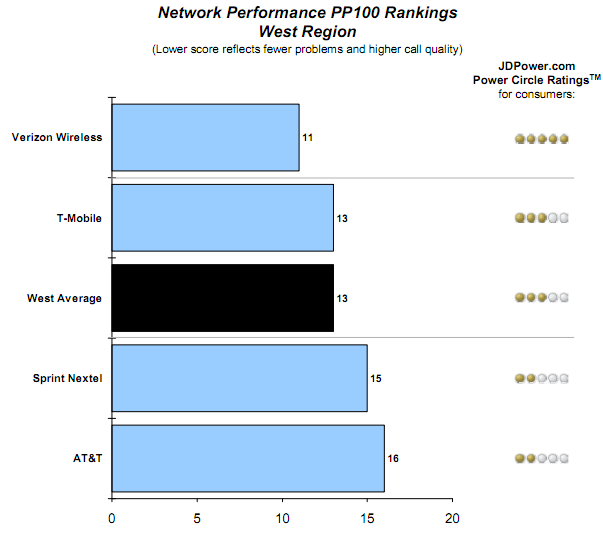