Bob Crimmins loves poker and golf, and has already started a daily deal site specifically for men. Now, the Seattle startup veteran is getting in touch with his feminine side.

This week, Crimmins is rolling out a new online shopping site for women called MoonTango that sells everything from skin care products to lip balm to tampons.

We caught up with Crimmins –a regular on the local startup scene and organizer of Startup Poker 2.0 — to find out more about MoonTango in the latest installment of Startup Spotlight.

Explain what you do so our parents can understand it: “MoonTango is a monthly delivery service for essential personal care products for women — with a little extra delight in every box.”

Inspiration hit us when: “Inspiration didn’t ‘hit’ as much as it ‘heaped.’ It began when I was introduced to ManPacks last year. ManPacks delivers socks, underwear and t-shirts to men on a subscription basis. I loved this idea when I heard it and knew within 90 seconds that I would be a customer for life. In the weeks and months that followed I found myself obsessing over the elements of their model — just-in-time delivery, replenishable products, recurring revenue, web-influenced hard goods sale. 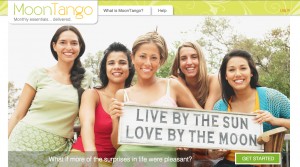 I started off thinking about a “HerPacks” model,  for example, undergarments for women on a subscription basis. I asked my wife what she thought. She flatly said ‘no way!’ But my wife is the wife of a serial entrepreneur and she understands that liking an idea has implications… so I asked a few other women I knew. Same answer: No way! But when I asked her a few weeks later about essential, replenishable personal care products on a subscription basis, she liked it — implications and all. That kicked off more than 70 conversations with women of all stripes and MoonTango was born.”

VC, Angel or Bootstrap: “Angel funded. Bootstrapping wasn’t an option because of the unit economics and the need to grow into margins quickly. It’s also an incredibly large market and organically snuggling up with it would, in my opinion, be a missed opportunity.”

The smartest move we’ve made so far: “It comes down to talking to women. I’ve met face to face with more than 70 women as the MoonTango model evolved, and it’s evolved a lot. I’m so grateful to all the brave women who very openly shared their thoughts around some pretty personal topics. The insights and ideas that came out of those conversations were invaluable. It is particularly delightful for me that some of the very best ideas came from women angels and VCs. So, while I’m at the helm, the MoonTango model truly was designed by and for women. And now that the product is live, the feedback I hear from women is unlike any I’ve seen from any set of customers from any company I’ve ever worked on. It’s very rewarding. The next smartest move I hope to make is building a phenomenal team of women to move the MoonTango vision forward.”

The biggest mistake we’ve made so far: “I’ve made plenty of mistakes, but the one I regret most is trying to raise funding in the summer.”

Would you rather have Gates, Jobs, Zuckerberg or Bezos in your corner: “Wow. Great list. But none of them are women. MoonTango would rather pick from a list like Gail Goodman, Dawn Lepore, Ariana Huffington, Lisa Stone and Oprah. I’d take any of them in my corner, but Dawn’s experience at drugstore.com would be particularly valuable… and her commute would be easy.”

Our world domination strategy starts when: “MoonTango becomes a verb. When women start responding to their girlfriend’s complaints of running out of tampons or condoms or lip balm and she says: ‘Oh, you should moontango that stuff.’ Then, we’re on our way to a MoonTango box on the doorstep of every woman in America.”

Rivals should fear us because: “Our rivals all think they are e-commerce delivery services. But MoonTango knows we’re not really that at all. Ok. I’ve said too much.”

We are truly unique because: “MoonTango’s uniqueness is not anchored in any particular feature or capability or who the founders are or any other superficial property. MoonTango’s uniqueness comes from our approach to understanding and solving problems… a balancing of objectivity and subjectivity, practicality and whimsy, yin and yang.”

The biggest hurdle we’ve overcome is: “I had to fire my first dev. It was a hard decision, but the right one to make. It was a serious setback at a very critical juncture and we lost significant traction because of it. But I was very up front with all of the investors I was working with and I didn’t sugar coat any of it. The reality was, however, that I had to cease fund raising to focus on getting dev back underway and getting the product to an “investable” state. At that point, I almost decided to roll up my sleeves and build the MVP myself. I’m glad I didn’t though because I found a terrific team that built a much better product than I could have and we got back on track.”

What’s the one piece of advice you’d give to other entrepreneurs just starting out: “Quantify everything you can about your market and your model and be brutally honest about the the opportunity. Validate your market and your model by seeking the feedback of qualified people who will be brutally honest, i.e., people who don’t know you and/or don’t like you. Seasoned entrepreneurs and investors are a great resource this. If you do this, your idea will get better.”