Back in 2007, Zillow unveiled a new offering called Neighborhood Pages that was designed to better connect home owners to their local communities. The idea didn’t really take off.

But fast-forward four years, and Zillow co-founder Rich Barton is back at it. This time, the Internet entrepreneur and venture capitalist at Benchmark Capital is tossing his support behind a new San Francisco startup called Nextdoor.

The idea is pretty similar to Neighborhood Pages, creating a trusted online destination where neighbors can gather to discuss crime, exchange gardening tools, find a pet sitter or, in the recent case of Barton, sell a laptop computer.

Barton, who has joined the board of Nextdoor, said he’s excited about the promise of creating a trusted social network designed specifically for neighbors. In fact, the Expedia founder and his wife have been testing out the service themselves over the past few months in the Washington Park neighborhood of Seattle.

“For me, it has been a fantastic practical utility first, but a surprising way of getting me more socially connected with my neighbors,” said Barton, adding that they’ve used the service to find babysitters, caterers and to report a coyote sighting.

As an example, Barton said that he recently turned to Nextdoor to sell a laptop computer. It made more sense to find neighbors who might want the laptop, instead of random folks on Craigslist. 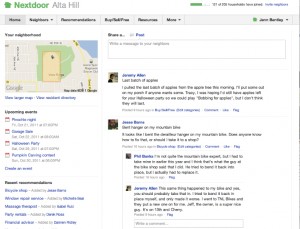 “We ended up meeting a neighbor …. who happened to own a Yoga studio in Madrona, and she ended up trading us a year of yoga for the laptop,” said Barton. “She came over to pick it up, we all chatted, and now we have a stronger community.”

In that regard, Nextdoor sounds a bit like Zaarly, the hyperlocal online marketplace that just announced $14 million in funding this week. But while Zaarly is focused more on the commerce element, Nextdoor is spending a good portion of its efforts on helping to foster relationships in communities and to build out a social network that neighbors will actually use.

“We noticed that while social networks have become completely mainstream, there is no social network for one of the most important communities of them all: your neighborhood,” Nextdoor founder Nirav Tolia tells GeekWire. “Once we dug a bit deeper, it became clear that there are many ways our neighbors can help us, but many of us don’t know our neighbors or how to contact them. Nextdoor was created to change that.”

As with many online communities, Nextdoor faces the age-old “chicken-and-egg” problem. Tolia, who previously co-founded Epinions, said that they plan to grow organically through member referrals.

At this point, Nextdoor — which is backed with an undisclosed amount from Benchmark and Shasta Ventures — has grown solely through word-of-mouth and is now available in 200 neighborhoods in 26 states.

“The vast majority of our members are invited by other members, so we’re seeing an impressive viral coefficient in our growth to-date,” said Tolia.

NextDoor is still working to perfect the user experience. But, over time, he said they plan to make money through local advertising and by showcasing deals from local businesses.

The 22-person company, which is also available in Seattle’s Sand Point neighborhood, is taking privacy seriously. To join a Nextdoor neighborhood website, you have to live in it and verify your physical address.

“In addition, everyone uses their real names – no anonymous users allowed,” said Tolia. “All content is behind a firewall and cannot be accessed anywhere — not in search engines, etc — unless a member has signed-in.”

Editor’s note: Rich Barton will be the featured speaker at the GeekWire Meetup at Seattle’s Spitfire bar and grill on Thursday night. Details here.