As the head of social media agency Nology Media, Leigh Fatzinger would sometimes publish as many as 5,000 Facebook posts per month on behalf of clients. It was a massive flow of content, and one pain in the butt to manage. Fatzinger’s team tried to address the issue internally, but quickly discovered that the problem was much bigger. So, Fatzinger did the next best thing: he hired some smart technologists to tackle the challenge. That’s the genesis of Prosodic, a four-month-old Seattle startup that’s launching today at the Word of Mouth Marketing Association event in Chicago.

The goal, according to Fatzinger, is to create a robust social media publishing tool that provides big corporate brands with behind-the-scenes intelligence of what’s working on Facebook, Twitter and other channels. It does this by storing a company’s social media stream, including all interactions with those who engage with the brand.

The software also includes various forms of permission settings, so an intern, contractor or staffer with access to a Fortune 500 company’s social media accounts can’t tarnish the brand with ill-timed Tweets or Facebook posts.

There’s certainly a lot of activity in the area of social media tracking, with companies such as Radian6 and BuzzLabs recently selling out. Bellevue-based Visible Technologies also just reeled in a $6 million round of funding.

Prosodic, which describes itself as a “predictive intelligence platform,” is different, Fatzinger says. The job of Visible or Radian6 is to listen to what’s being said on social media channels. Prosodic, he said, is designed to not only track what’s being said but also predict how Facebook or Twitter messages will resonate with customers before they are actually published.

“This is the next step in the evolution of social media management, utilizing a publisher’s own data and predictive intelligence to eliminate the guesswork regarding what, when and how often to post,” Fatzinger says. 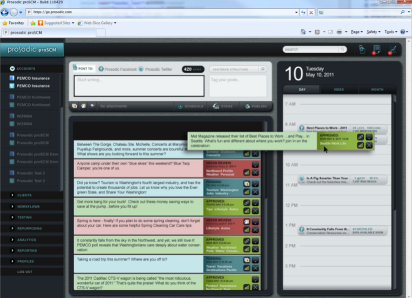 The platform is designed for very large brands, with Prosodic initially going after a target list of about 5,000 companies which have 500,000 or more “likes” or followers. A free version of the software allows a user to connect to one Facebook feed or Twitter page, with additional modules for typical customers ranging in price from $120,000 to more than $1 million annually.

“It is not a small business product. That segment of the market is really filled up with easy-to-use tools,” said Fatzinger. “But the problem we were trying to solve at Nology is how do you publish to dozens of Facebook pages? And how do you publish thousands of content objects per day or per month and making sure that every one of those is getting its optimal performance.”

As a result of the formation of Prosodic, Fatzinger has stepped down from his day-to-day duties at Nology Media where he remains chairman. He’s also hired an all-star team at Prosodic, most notable of which is Alessandro Muti who developed the technology behind the company.

Muti is the former CTO of Ascentium, a high-tech consulting firm with $80 million in annual revenue. Before that, he worked at Microsoft where he invented the Windows Automatic Update.

Potential competitors include HootSuite and CoTweet, which are baking in permission systems into their products as well. But Fatzinger said that they are pretty much an “on-off switch” to determine who can or can not publish.

“We are taking it one step further, saying you can build your own workflow,” said Fatzinger, adding that individuals can be given certain roles to publish specific types of posts at various times during the day.

Fatzinger declined to say how much money he’s raised for Prosodic. The company — which has filed for seven patents on the technology — employs seven people.