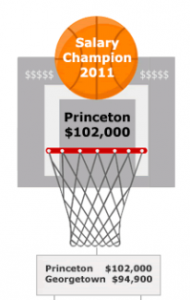 I spent a portion of my Sunday evening analyzing the NCAA Men’s basketball pool. It was a tough task trying to fill out the brackets given that I’ve watched a total of about 20 minutes of college hoops this winter. But now there’s another method of predicting the madness: Salaries. PayScale, the Seattle online salary survey service, has once again rolled out its own form of “bracketology” using the median salaries of graduates of those schools participating in the tournament.

And just how might it play out if salaries were a factor rather than three pointers?

Well, my Ohio State Buckeyes — the overall number one seed in terms of basketball skills — would get eliminated in the second round. The UW, on the other hand, with a median salary of $77,200 would cruise to the “great eight” before getting eliminated by Princeton. (Amazon.com founder Jeff Bezos’ alma mater will be the eventual winner, according to PayScale, with a median salary of $102,000).

The Final Four will be comprised of UCLA, Georgetown, Princeton and Duke, according to PayScale’s analysis. (Not bad picks, other than Princeton which I think will get knocked out in round 1 by Kentucky).

Of course, this is more of a fun exercise than anything else. After all, it’s impossible to predict basketball games based on salaries of graduates. Or, is it?

You can see the entire PayScale bracket here. Good luck to everyone with their brackets.

John Cook is co-founder of GeekWire, a Seattle technology news site based in Seattle. Follow on Twitter: @geekwirenews.