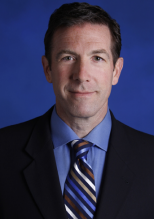 Microsoft has been undergoing a series of changes in the executive ranks in recent weeks. And that trend continued today as Frank Holland was tapped to lead the company’s global advertising sales business. A 13-year veteran of the company, Holland will report to chief operating officer Kevin Turner.

Jay Greene at CNET reports that Holland will take over from Darren Huston, and notes that the executive will have some “heavy lifting” ahead given some of the strains in the relationship with Yahoo.

Earlier this month, veteran executive Chris Capossela was named as the senior vice president in charge of the expanded “Consumer Channels and Central Marketing Group.” He also reports to Turner.

Here’s more of the corporate structure under Holland, according to Microsoft’s press release.