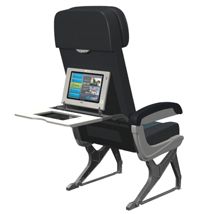 Back in 2003, I wrote a story about an Alaska Airlines baggage handler-turned-entrepreneur by the name of Bill Boyer who created a new electronic entertainment system called the digEplayer. That device has remained mainstay on Alaska Airlines flights, with GeekWire columnist Frank Catalano reviewing the newest version after testing it on a recent flight.

“Airlines face tough conflicting pressures to lower costs, increase their ancillary revenues, without resorting to higher fees. Today’s tech-savvy passengers expect and deserve a better onboard experience,” said Boyer in a statement. “The TrayVu IFE system was designed from the ground up to meet those challenges and expectations.”

What are the specs?

Weighing in at less than two pounds, the company says that the system is a fraction of the weight and cost of most seat-back systems. It also includes HD resolution on an 8.9 inch touch screen. The system just isn’t about movies and TV shows, with users of the high-tech tray able to input food and drink orders.

It is developed around a Samsung Galaxy tablet, utilizing an Android Honeycomb 3 platform.

UPDATE: I asked Skycast Chief Operating Officer A. Peter Parsons, the attorney and father of noted Seattle entrepreneur Pete Parsons, the obvious question. Why would anyone want to use an in-tray entertainment system in this era of iPhones, iPads and tablet computers.

Here’s what Parsons had to say:

Put a fully functional tablet at each seat and the impetus to drag out your PC or tablet is lessened. Personally, I pull out my MacBook only reluctantly because the Continental system is so limited. Our system (and several new entrants) give the passenger what the expect rather than something that feels like MS-DOS.