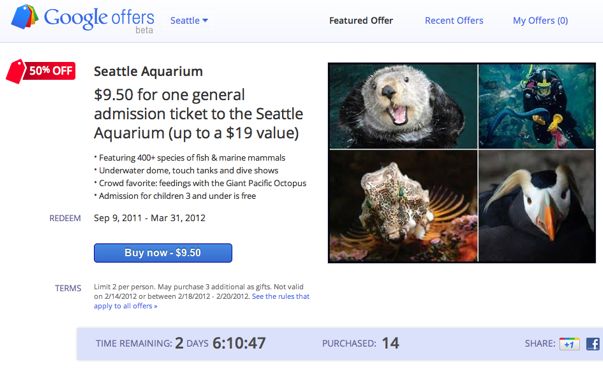 Google Offers is finally arriving on the shores of Seattle, and it is looking to make chum out of rival Groupon with a half off discount on tickets for the The Seattle Aquarium. Those who participate in the Google Offers’ deal also can apply the discount to a family or individual membership. 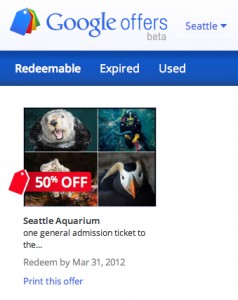 The Seattle Aquarium has limited the deal to two per person, though individuals may provide the offer to three additional friends or family members as gifts.

I gave the service a try tonight, intrigued with the idea of getting a $19 ticket to the aquarium for $9.50. The service worked pretty smoothly, though it was a bit confusing since I wanted to actually purchase two of the offers in one session. (It doesn’t appear as if that’s permitted, forcing the user to go back to the home screen in order to make another purchase).

The expansion of Google Offers also comes amid some rocky times for Groupon, which reportedly has put its plans to go public on hold.

Google, meanwhile, has every intention of charging hard into the market for local deals, motivated even more so by the fact that Groupon spurned a $6 billion offer from the company late last year.

Previously on GeekWire: Is Portland the new Peoria? Google Offers arrives at Floyd’s