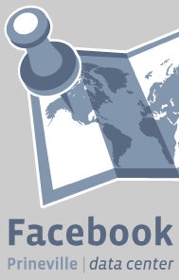 Yesterday, we told you about Facebook’s desires to find more office space in downtown Seattle. But that’s not the social networking giant’s only expansion effort in the Pacific Northwest. The company also just announced that it plans to begin construction this October on the second phase of a new data center campus in Prineville, Oregon.

When Facebook first opened its Prineville facility, its first company-owned data center, it had 350 million users. Now, that number has mushroomed to 750 million. To keep up with that growth, Facebook needs to add server capacity at an enormous rate.

Located just northeast of Bend, Prineville appears to be a nice home for Facebook.

Technology companies are attracted to the Pacific Northwest for data centers in part because of the cheap hydroelectric power from the Columbia River. Often described as energy hogs, data centers don’t employ many people despite their large physical sizes.

The Prineville facility, for example, currently employs 54 people and expects to add just 10 jobs as part of the expansion. Nonetheless, Oregon politicians have applauded the move.

And any job growth in Crook County — which The Oregonian notes has the state’s highest unemployment rate 1t 15.3 percent — is welcome news.

“With Facebook’s continued growth this is a great economic partner for a community that has taken some hits but keeps on getting up,” said U.S. Senator Ron Wyden in a Facebook message. “This means hundreds of construction jobs in the near term, and a long-term investment in future of central Oregon.”

The small numbers of full time staffers at data centers contrasts with Facebook’s engineering facility in downtown Seattle which has quickly grown to 40 people in the past 11 months. Real estate brokers say the company is now looking for space in Seattle to accomodate as many as 200 workers.