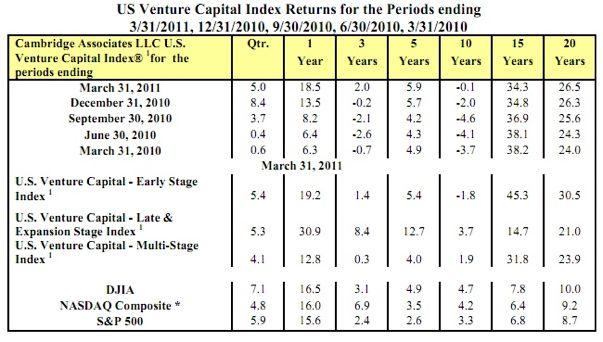 Venture capitalists took it on the chin for a few years as the initial public offering and M&A markets simply dried up. But things continue to turn around, albeit slowly. A new report out today from Cambridge Associates indicates that venture capital performance  continued its upward trajectory for most time periods.

As the chart above shows, venture capitalists saw returns of 18.5 percent for the one year period ended March 31. That was just ahead of the Nasdaq and Dow Jones Industrial Average. 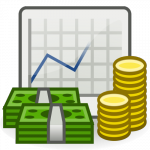 “Slow and steady improvement has been the name of the game in venture performance for the last several quarters,” said Mark Heesen, president of the National Venture Capital Association. “The venture capital industry is coming through a very turbulent period in U.S. economic history and recovery is going to take time, even with the improving exit market we have seen in the last year. But make no mistake that we are headed in the right direction and we expect these gains to continue throughout the coming year.”

Seattle area companies have experienced the boom, with Zillow going public last week and PopCap games agreeing to sell to Electronic Arts for up to $1.3 billion. A number of venture capital rounds — including a $37 million whopper for Kirkland-based Inrix — also have closed in recent weeks. Those deals aren’t factored into this report since it lags by one quarter.