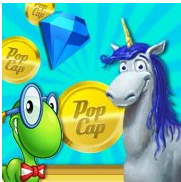 Is PopCap Games getting ready to launch a series of casino-style games on Facebook? Some new domain purchases, as well as changes to a Facebook page and a recent trademark application, certainly points in that direction.

PopCap has filed for a trademark on Lucky Gem Casino, with the tech news site Fusible also spotting changes to a Facebook page which indicates that the name will be the future home base of its casino-style games.

“Thanks for visiting! PopCap Casino is the future home of some amazing, casino-style social games from PopCap, the worldwide leader in casual gaming,” says a message on the site, which has been renamed Lucky Gem Casino.

We’ve reached out to PopCap, and we’ll update this post if we hear more.

The move into casino-style games is significant. That’s because because PopCap’s new parent, Electronic Arts, is locked in a battle with rival Zynga which has its own popular gaming titles in that category.

It will also be closely watched by Double Down Interactive, a Seattle upstart which has been growing fast with its own Facebook-based casino games.

In an interview on CNBC’s Mad Money last week, Electronic Arts’ CEO John Riccitiello noted that social games are “exploding” right now. While Zynga may have been the pioneer in the category, Riccitiello said that — with the help of PopCap and new titles such as The Sims Social — they’ve been able to cut into that lead.

Here’s the interview in which Mad Money host Jim Cramer notes that EA’s social media business model of virtual goods seems like “alchemy, except it is real.”

Q&A: PopCap founder on the EA deal, and the future

Report: PopCap turned down $1B buyout offer from Zynga