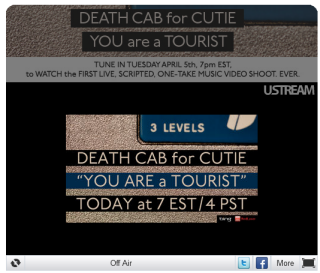 I am really curious to see how this turns out. At 4 p.m. today, the Seattle/Bellingham band Death Cab for Cutie plans to conduct what it is calling the “first live, scripted, one-take, music video shoot ever.” You can tune into the action on Death Cab’s Web site or Facebook page (or below) where the band is broadcasting the action via Ustream.

In advance of the event, Mashable has a great interview with Death Cab’s Nick Harmer on the role of technology in music today, with the bassist noting that “new technology has opened all kinds of avenues of exploration for us when creating and distributing everything — including making music videos.”

“We have always been inspired by the intersections between creative fields, where music meets film, where film meets Internet, where Internet meets music, etc., and there are so many ways to enjoy the things you love these days that the sky is pretty much the limit with putting things out there,” he adds.

Sounds like our kind of guy, and by the way the band makes pretty good music too.

You can also follow along below where the action just started. As of 3:55 p.m., there were more than 3,800 viewers.

Can’t see the stream on your mobile device? Click here.