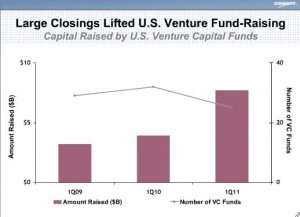 Some may say that the venture capital model is broken. But that’s not stopping money from flowing into the coffers of VCs. Dow Jones LP Source reports today that U.S. venture capital funds raised $7.7 billion in the first quarter, nearly double the $3.9 billion for the same period last year. What gives?

The numbers are being driven by the success of several large venture capital firms such as Sequoia Capital and Bessemer Venture Partners, which have scored big hits in recent months.

It will be interesting to see how things play out for Seattle’s smaller crop of venture funds, which haven’t had quite as much success as their Valley counterparts. Will they be able to raise cash, and if so will they decide to go out this year when the market is relatively warm?

One fund to watch will be Voyager Capital, a firm with offices in Silicon Valley and Seattle. It raised a $107 million third fund in 2007, and has backed companies such as About Us, Bonanza and Ground Truth.

Separately, the National Venture Capital Association released a similar report in which it said the $7 billion raised by 36 venture capital firms was the biggest total since the third quarter of 2008 and the best start to any year since 2001.