GeekWire has been closely following the developments of Amazon.com’s new delivery locker system at 7-Eleven, in part because it represents a novel method by which customers can receive their packages from the online retailer. As we previously reported, the system was expected to be turned on today at one 7-Eleven store in Seattle’s Capitol Hill neighborhood. 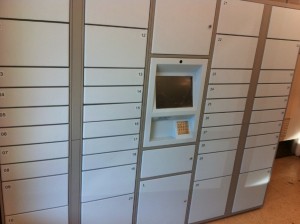 GeekWire’s Rebecca Lovell popped by the 7-Eleven this morning, and snapped the photo above. The photo is interesting, in part, because the screen shows actual branding of the product as “Amazon Locker.” (On my visit earlier this week, the monitor, which sits in the middle of the locker system, was not yet activated).

A 7-Eleven clerk told GeekWire that no one is using the lockers yet that he’s aware of, and he didn’t know when packages would start arriving. Rebecca didn’t have a code to input, so she made one up. Result? It returned an error message.

The locker idea, for those who are new to this story, is a novel one (at least in the U.S.). Amazon customers would be able to choose to have packages delivered to a specific 7-Eleven store, receiving an access code that could be used to open one of the lockers where the item is stored.

It is a cool idea, and could solve the problem of those shoppers who don’t have a reliable spot for deliveries to be left throughout the day.

We’ve reached out to Amazon about the project, but have not heard a peep. Looks like they want to keep this one under wraps until they get some more testing under their belts. That said, if anyone in the GeekWire audience is testing the service or knows anything more about it, let us know in the comments or at tips@geekwire.com.

The roll out of Amazon’s new locker system, first reported by The Daily, has captured national media attention. Since our story ran with photos of the lockers, we’ve received inbound requests from media outlets in San Francisco, Boston and beyond.

Why such an interest?

It plays into my theory that people love stories where there’s an overlap of the “real world” and technology. The idea of delivery locker also could change the way people think about e-commerce, bringing a whole new definition to the word convenience.

Previously: Amazon’s new locker system at 7-Eleven is not its first foray into pick-up stations