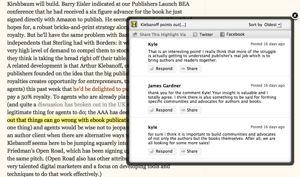 For the most part, readers of this online news site and most others are forced to leave their comments at the bottom of the page. Highlighter, a Seattle startup which is expanding its service today to include a number of new platforms, wants to flip that idea around by empowering readers to leave comments where they want on a Web page.

Led by Josh Mullineaux and Matt Blancarte, the Seattle upstart and TechStars grad today announced that its service is available on a wide-variety of content management platforms, from Blogger and Tumblr to Drupal and Joomla. It had previously only been available on WordPress.

In addition to commenting, the service is designed to allow readers to easily share selected snippets of text. So, for example, if you were interested in only sharing this sentence, you could do so by highlighting it using the tool.

Mullineaux said that the service is easy to install regardless of the platform. There’s no shortage of trusted online commenting systems on the market, from Facebook’s new commenting tool to Disqus (which happens to be used by GeekWire). Where Highlighter could get really interesting is integration with digital books — namely textbooks — since the service also allows for archiving of highlighted text in a personal account.

ReadWriteWeb reports that the archiving and sharing is a key differentiator, with reporter Audrey Waters noting that Amazon’s Kindle doesn’t allow readers to share notes with others.  “There’s no way to follow other readers (or authors) and see what interests them, what they’ve highlighted, and what notes they’ve jotted down,” Watters writes.

Here’s a video showing how the service works, with some cameos of some other well-known grads of the TechStars program.