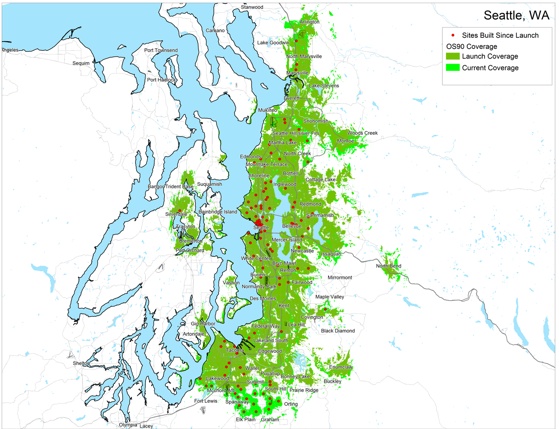 Clearwire today announced that it has added nearly 100 new cellular towers and bolstered its overall coverage in the Seattle area, expanding the network to cover as many as 240,000 people. It is the biggest expansion of the company’s network in the Seattle area since it launched here in December 2009.

Working in conjunction with partners Sprint and Comcast, Clearwire’s network now has the potential to cover some three million people in the area. Enhanced capacity and coverage has been added in cities such as Bellevue, Tacoma, Tukwila, Kirkland and Edmonds. (See full map above).

“The expansion of Clearwire’s 4G coverage and capacity provides our customers and those of our wholesale partners a wider service area and deeper network resources to better meet the rapidly growing demand for mobile broadband connectivity across the region,” said Amy Holly, regional general manager for Clearwire, in a statement.