SATSOP, Wash. — Amid the ruins of what was meant to be a nuclear power plant, a robot catches a whiff of carbon dioxide — and hundreds of feet away, its master perks up his ears.

“I think I’ve got gas sensing,” Fletcher Talbot, the designated human operator for Team CSIRO Data61 in DARPA’s Subterranean Challenge, told teammates who were bunkered with him in the bowels of the Satsop nuclear reactor site near Elma.

Moments after Talbot fed the coordinates into a computer, a point appeared on the video scoreboard mounted on a wall of the bunker. “Hey, nice,” one member of the team said, and the whole squad broke into a short burst of applause.

Then it was back to the hunt.

The robot’s discovery marked one small step in the Subterranean Challenge, a multimillion-dollar competition aimed at promoting the development of autonomous robots to seek out and identify victims amid the rubble of an urban disaster area, or hazards hidden in the alleys of a hostile cityscape.

Ten teams from around the world converged on the Satsop site this week to compete in the challenge’s Urban Circuit, the second of three contests leading up to a final runoff in August 2021. The first contest, known as the Tunnel Circuit, took place six months ago in two mines near Pittsburgh. The third contest will be staged this August in a cave yet to be identified.

“It’s kinda like a triathlon,” Timothy Chung, DARPA program manager for the challenge, told a gaggle of journalists who were let in to observe this week’s action. 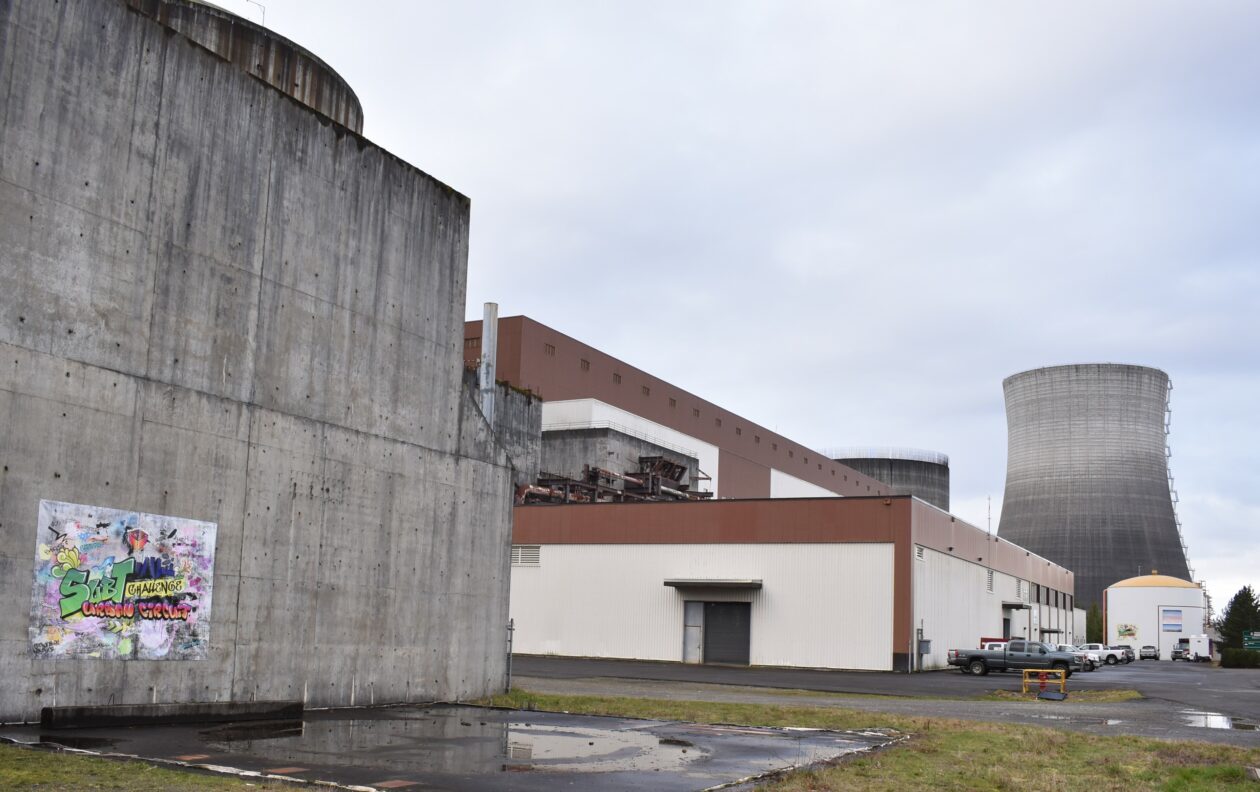 DARPA is conducting the Urban Circuit of its Subterranean Challenge inside the abandoned buildings of the Satsop nuclear power plant site. (GeekWire Photo / Alan Boyle) 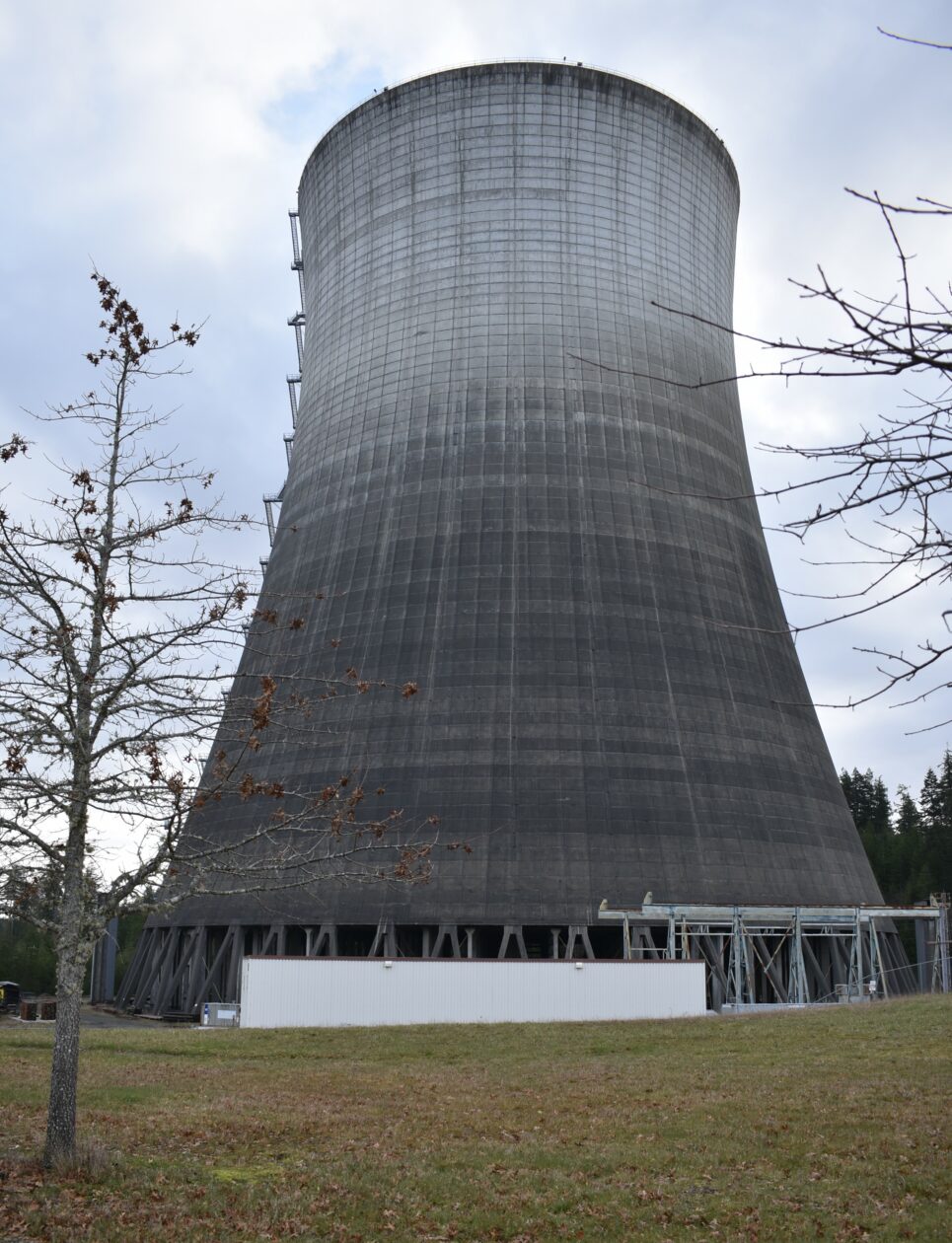 The idle cooling towers are the most prominent features of the Satsop site, which now serves as a business park. (GeekWire Photo / Alan Boyle) 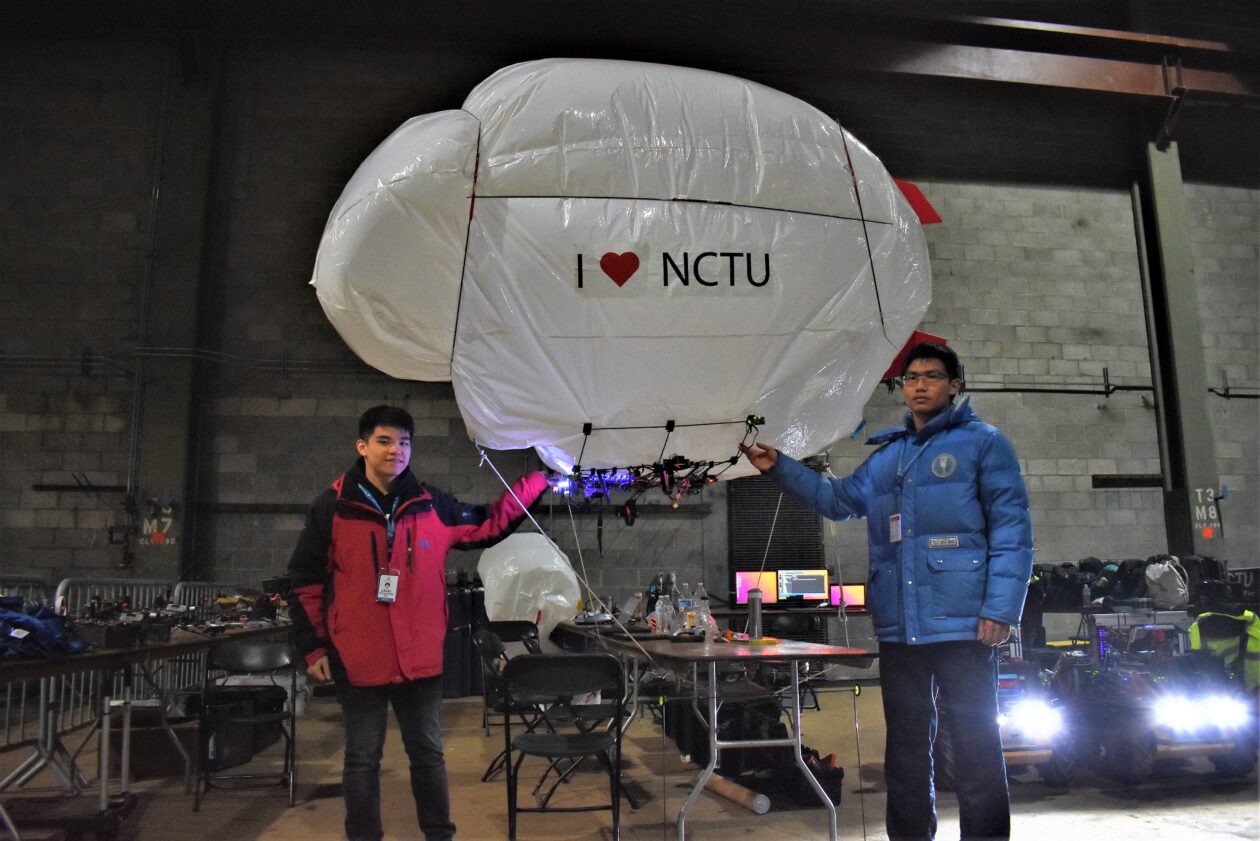 Members of Taiwan’s NCTU team show off their Duckiefloat drone, which is lofted by a helium-filled blimp. (GeekWire Photo / Alan Boyle) 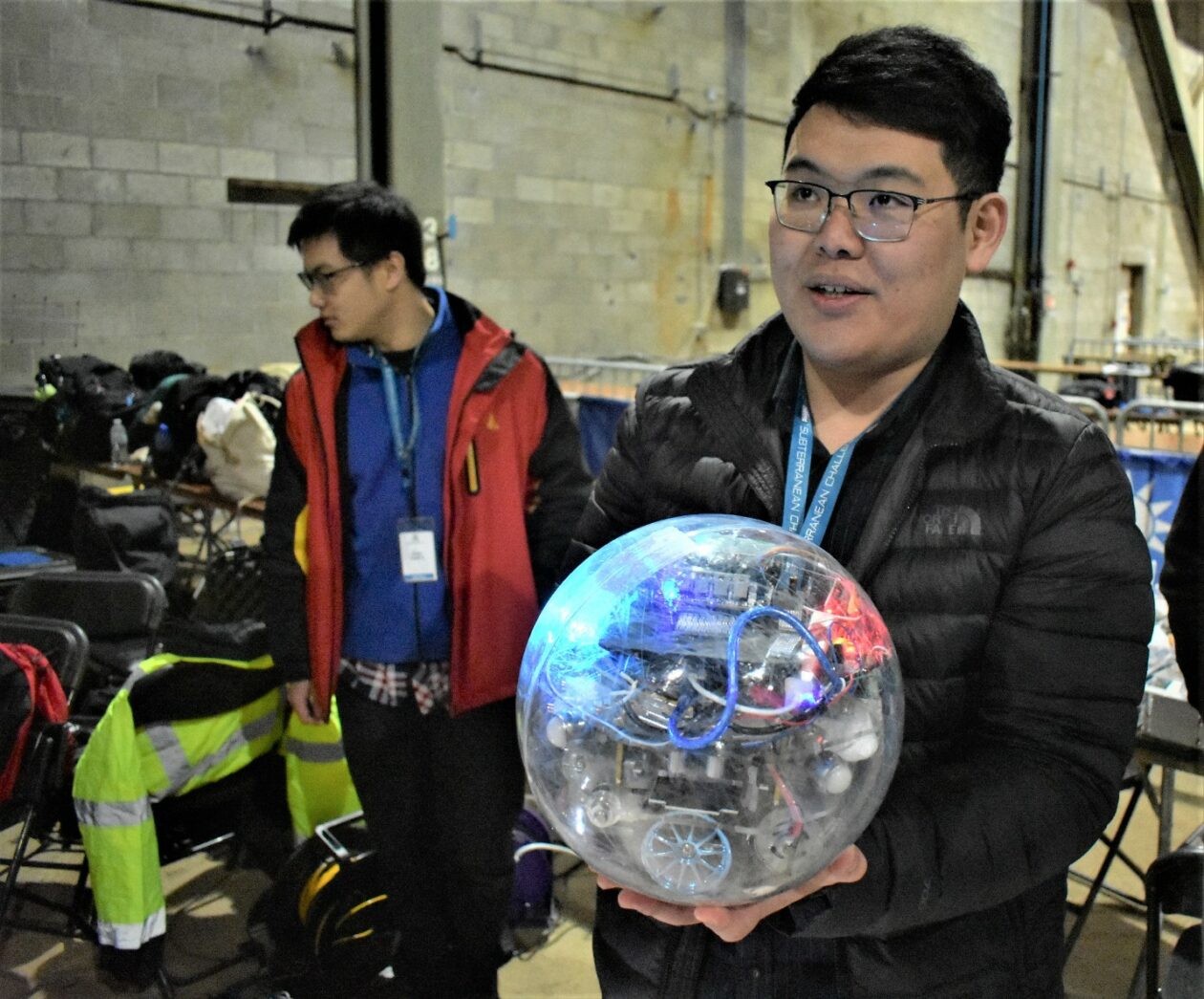 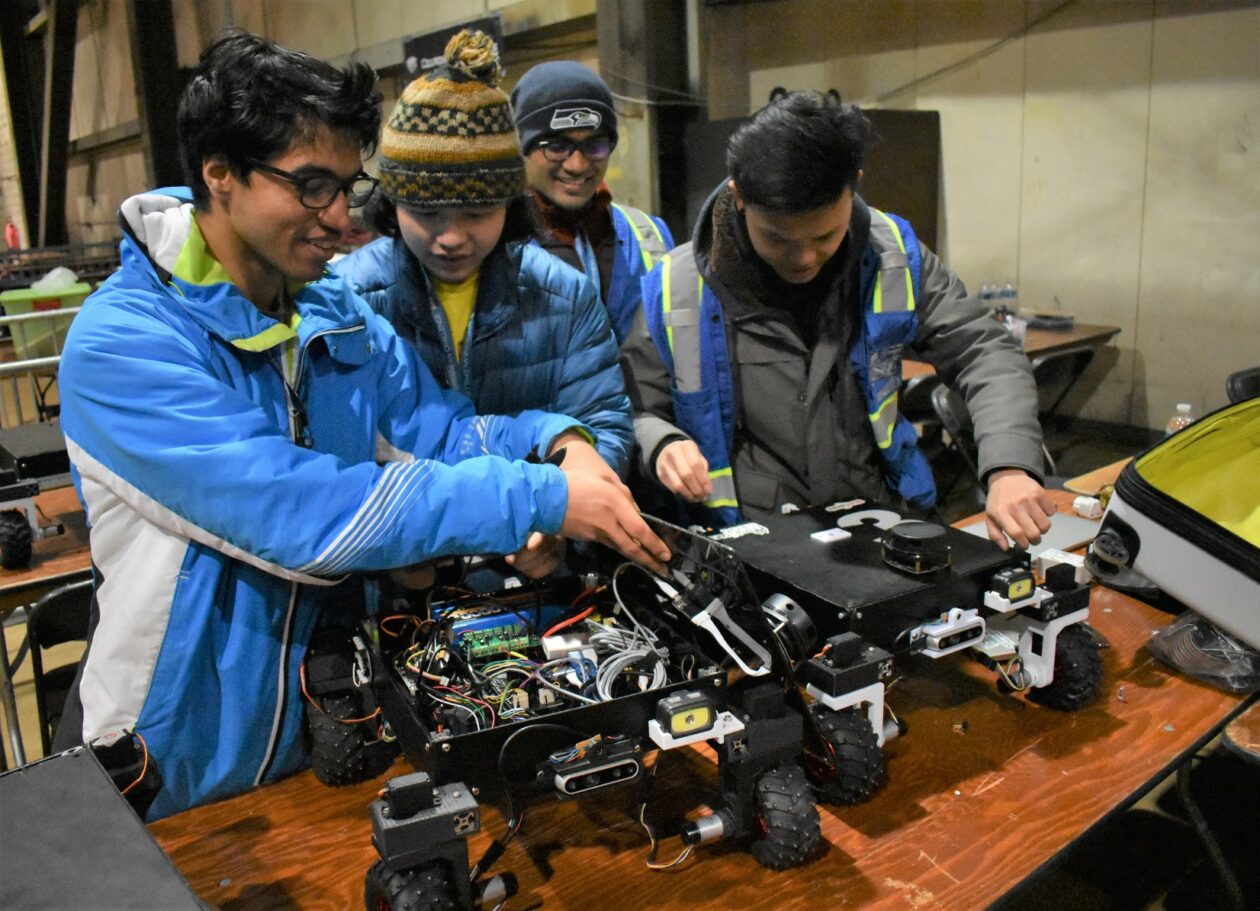 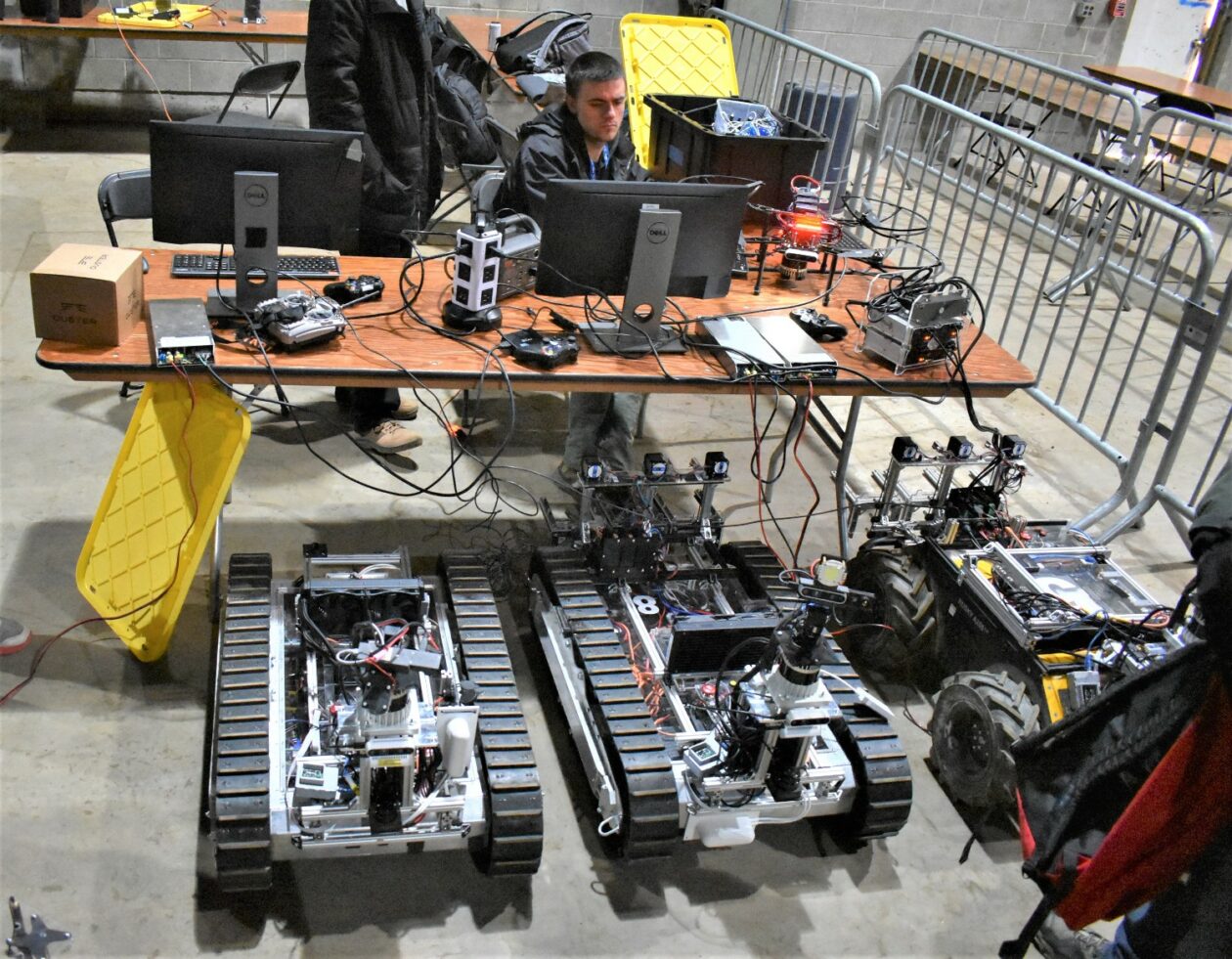 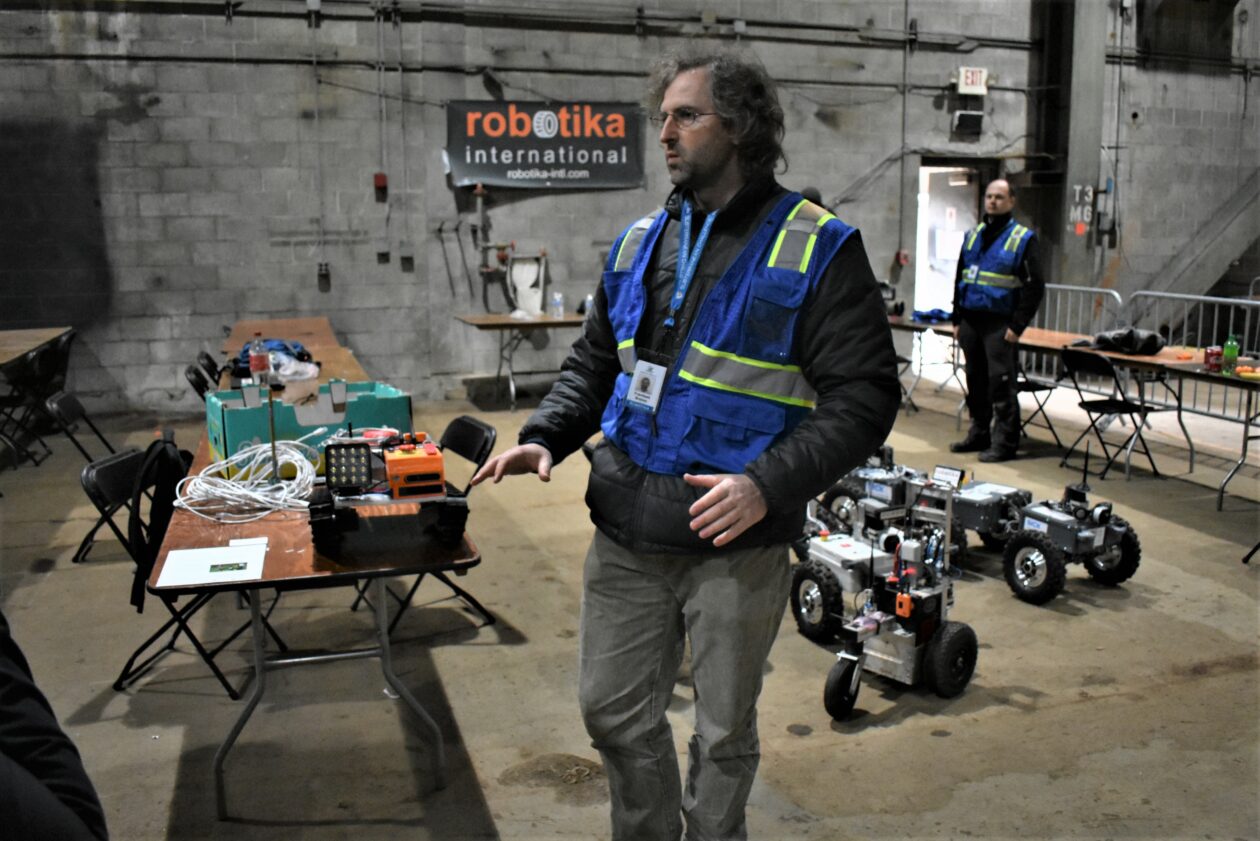 Robotika team member Frantisek Brabec shows off a variety of robots. “We are not putting all our eggs in one basket,” he says. (GeekWire Photo / Alan Boyle) 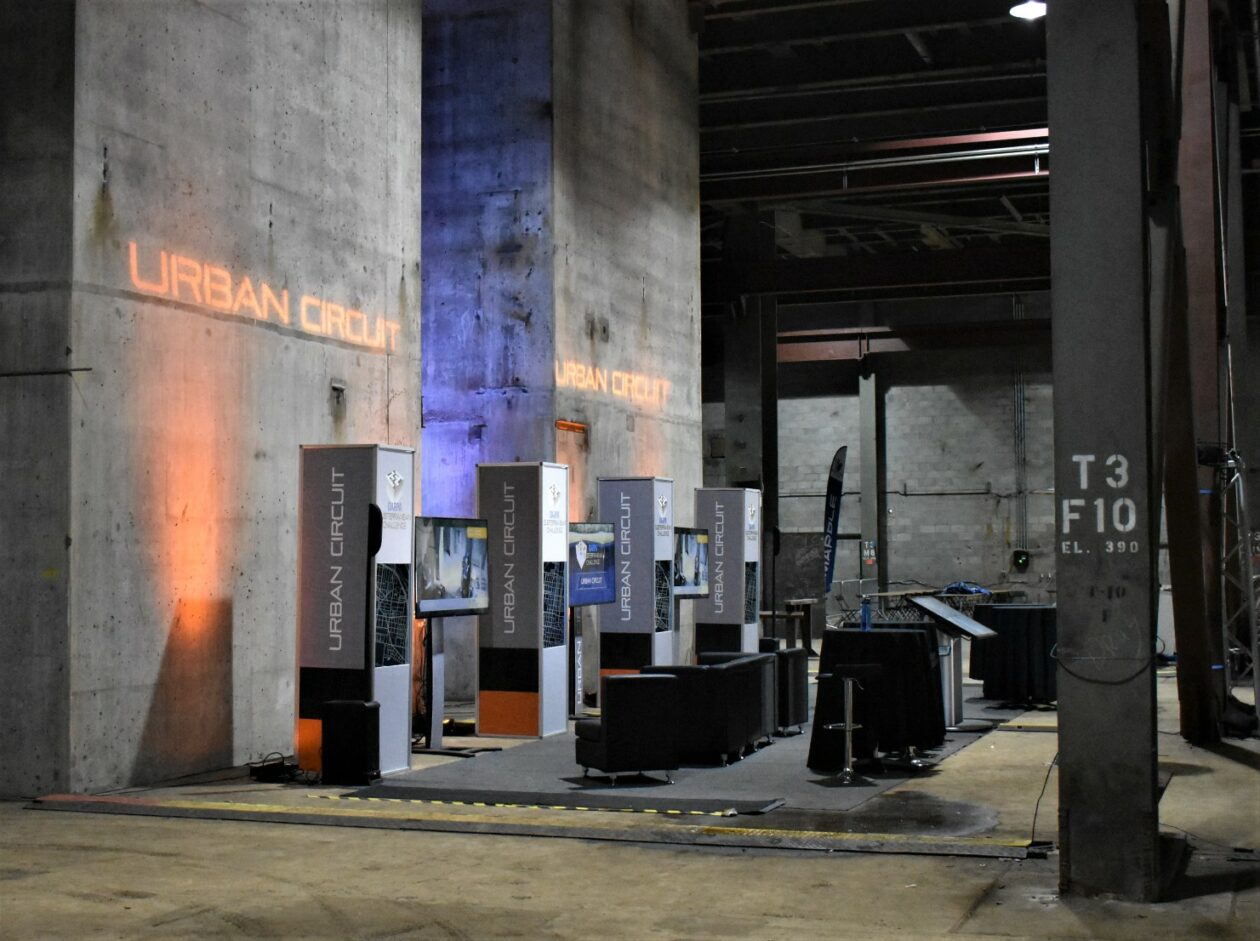 One corner of the abandoned nuclear power plant is set aside as a lounge for the Subterranean Challenge teams. (GeekWire Photo / Alan Boyle) 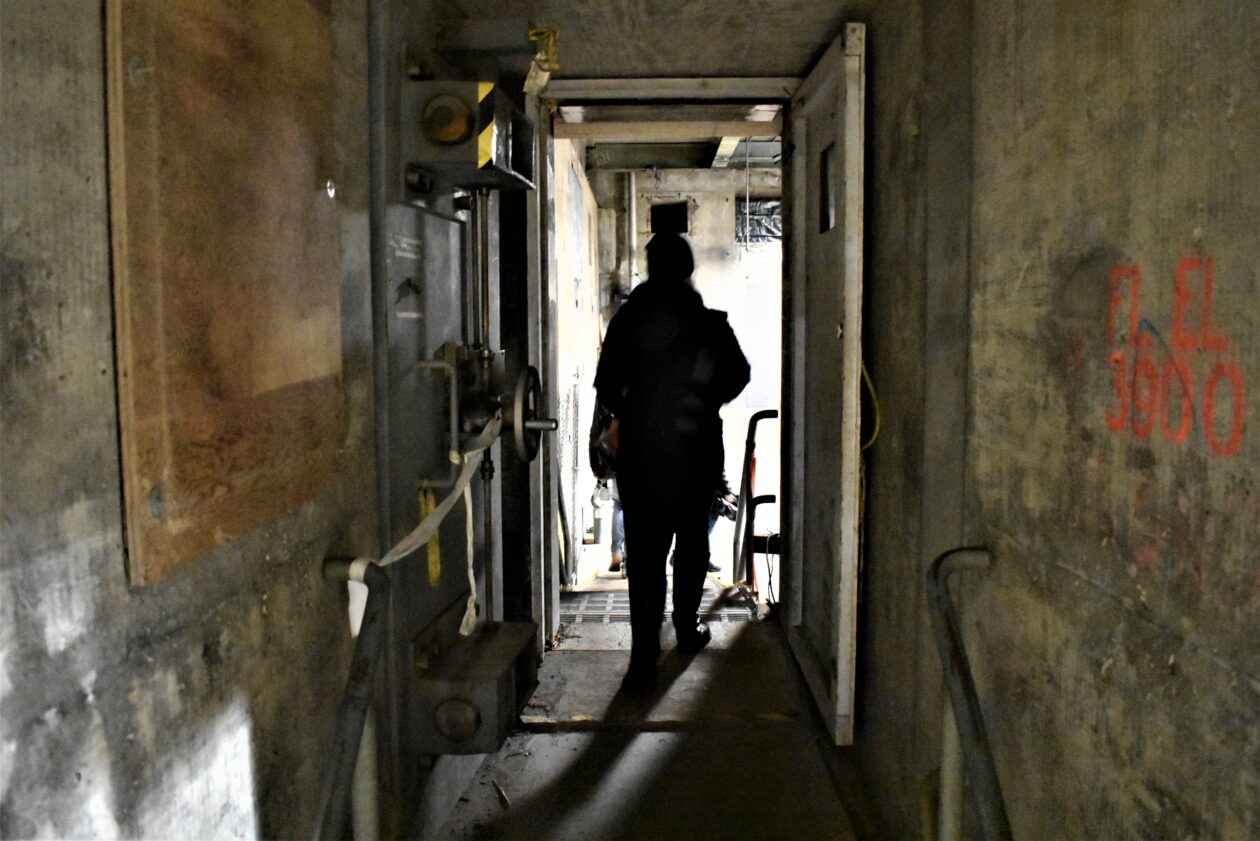 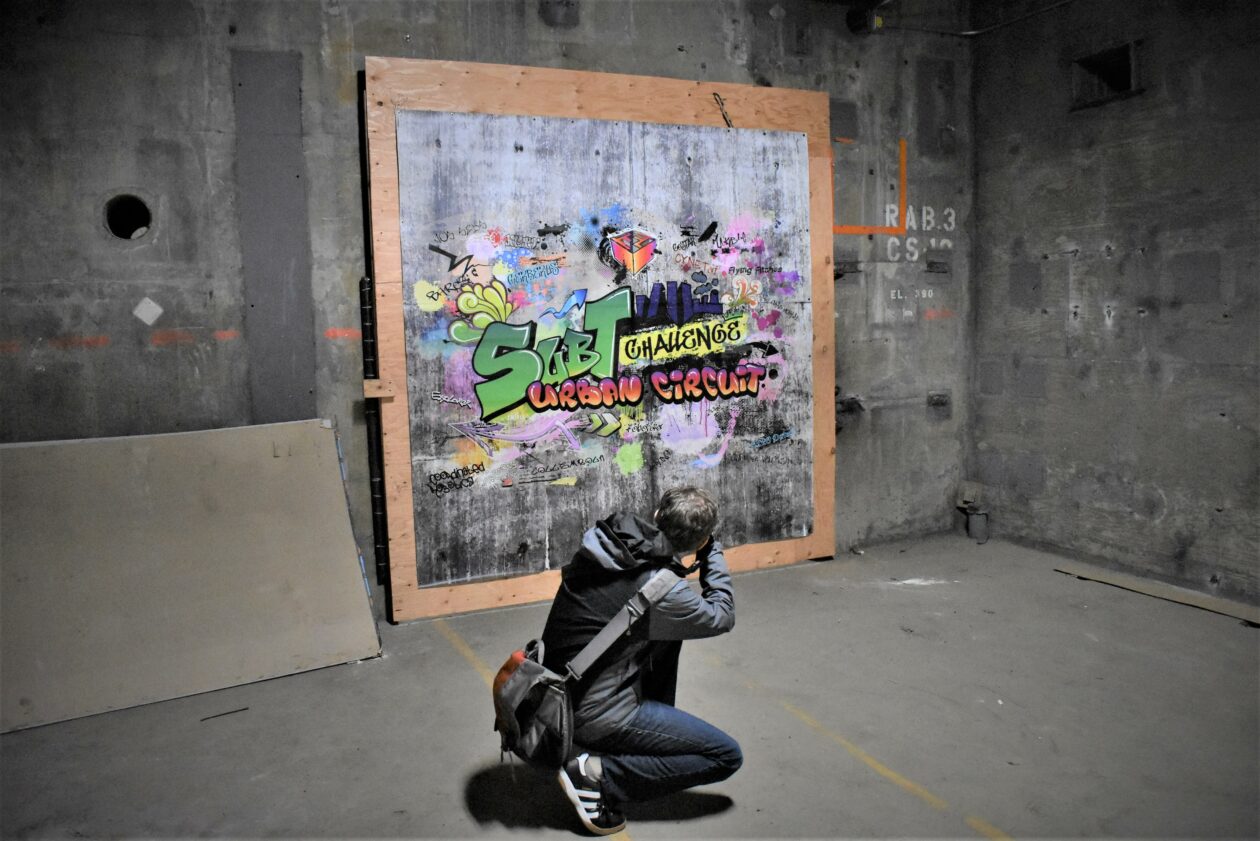 A door that leads to the Subterranean Challenge’s hidden maze is decorated with a mural. (GeekWire Photo / Alan Boyle) 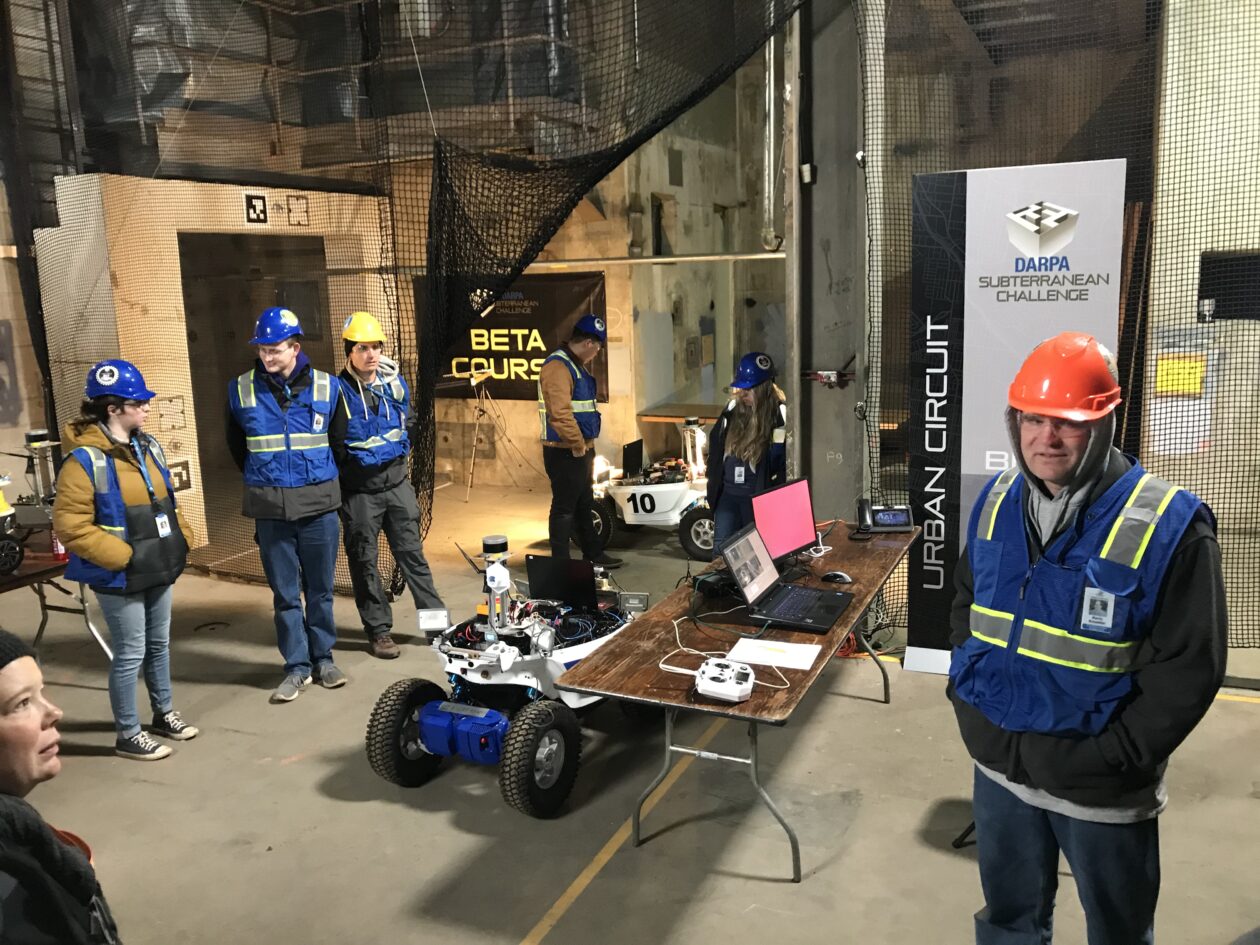 The Coordinated Robotics teams gets ready for its turn to send robots through the Beta Course. (GeekWire Photo / Alan Boyle) 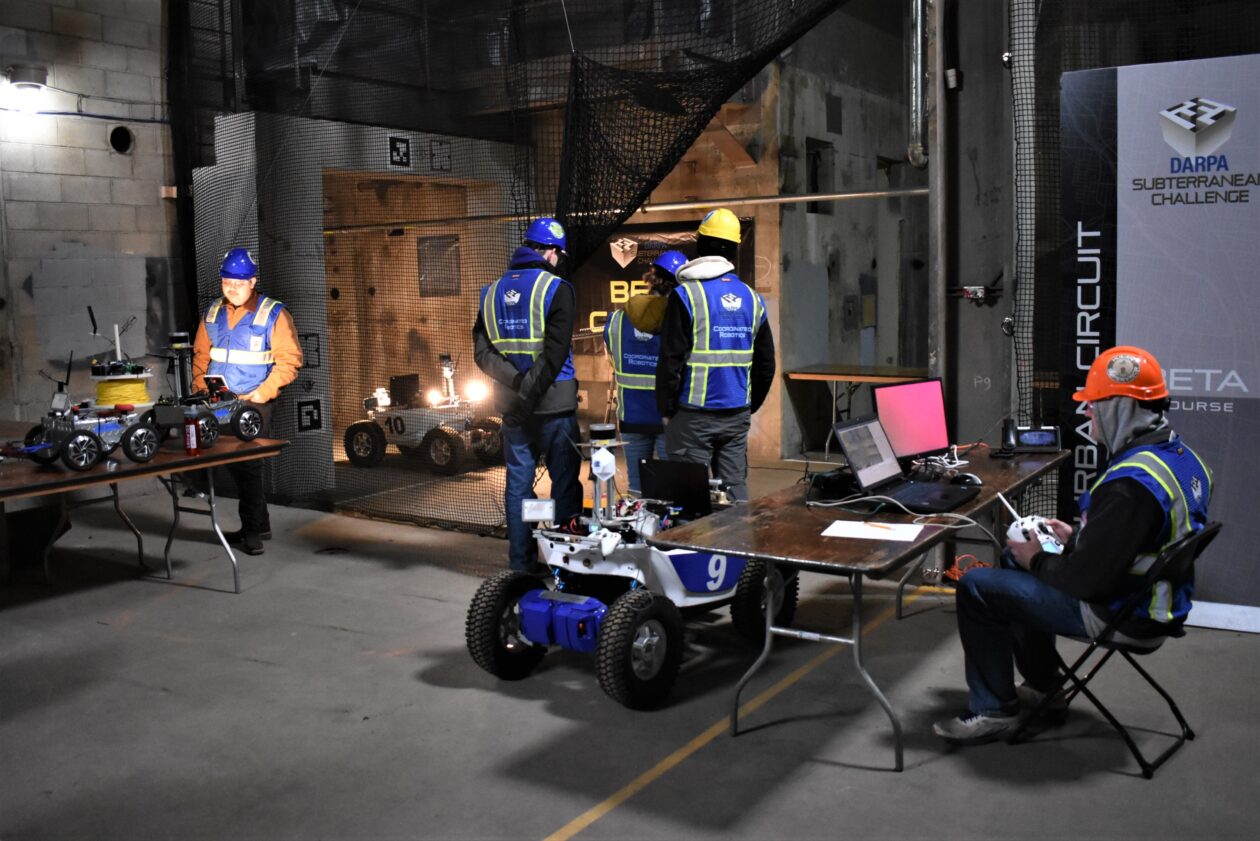 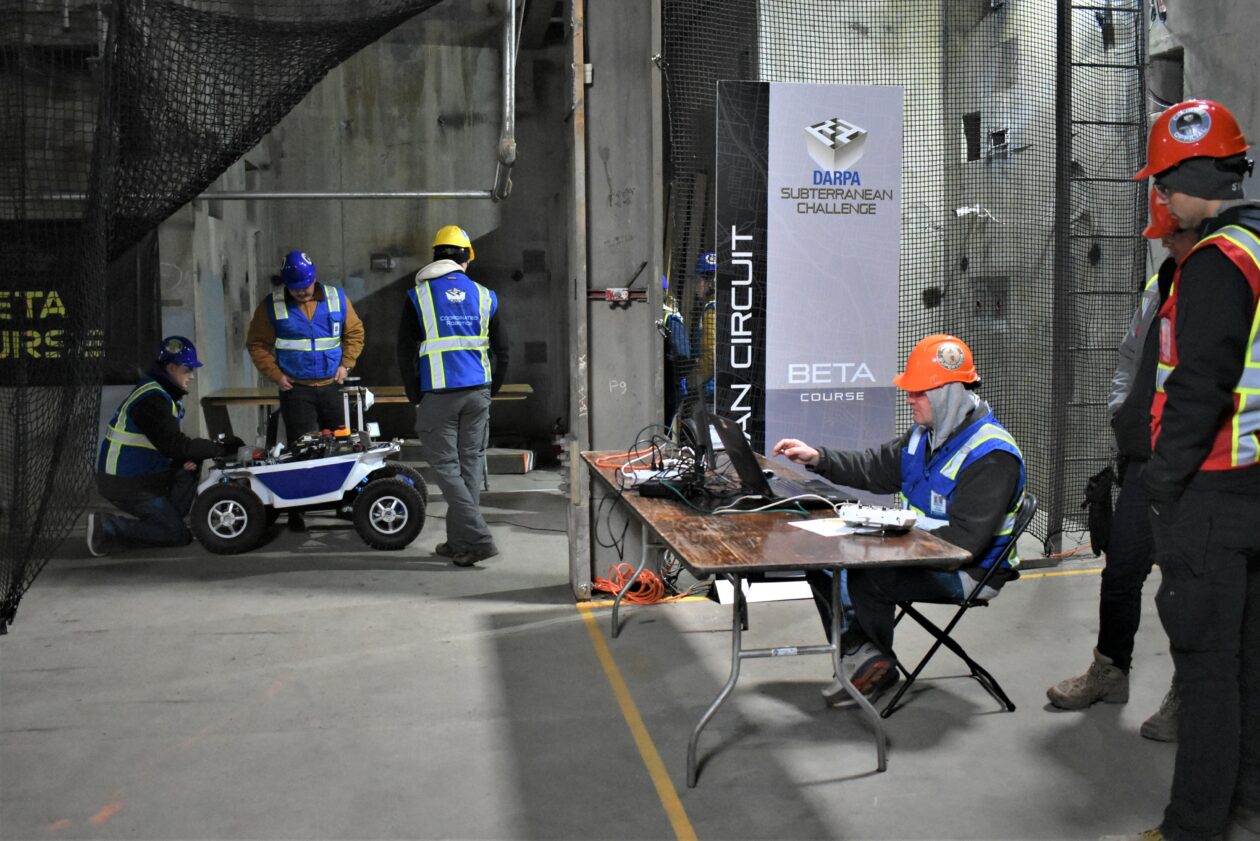 The Coordinated Robotics team gets set to send another robot into the maze. (GeekWire Photo / Alan Boyle) 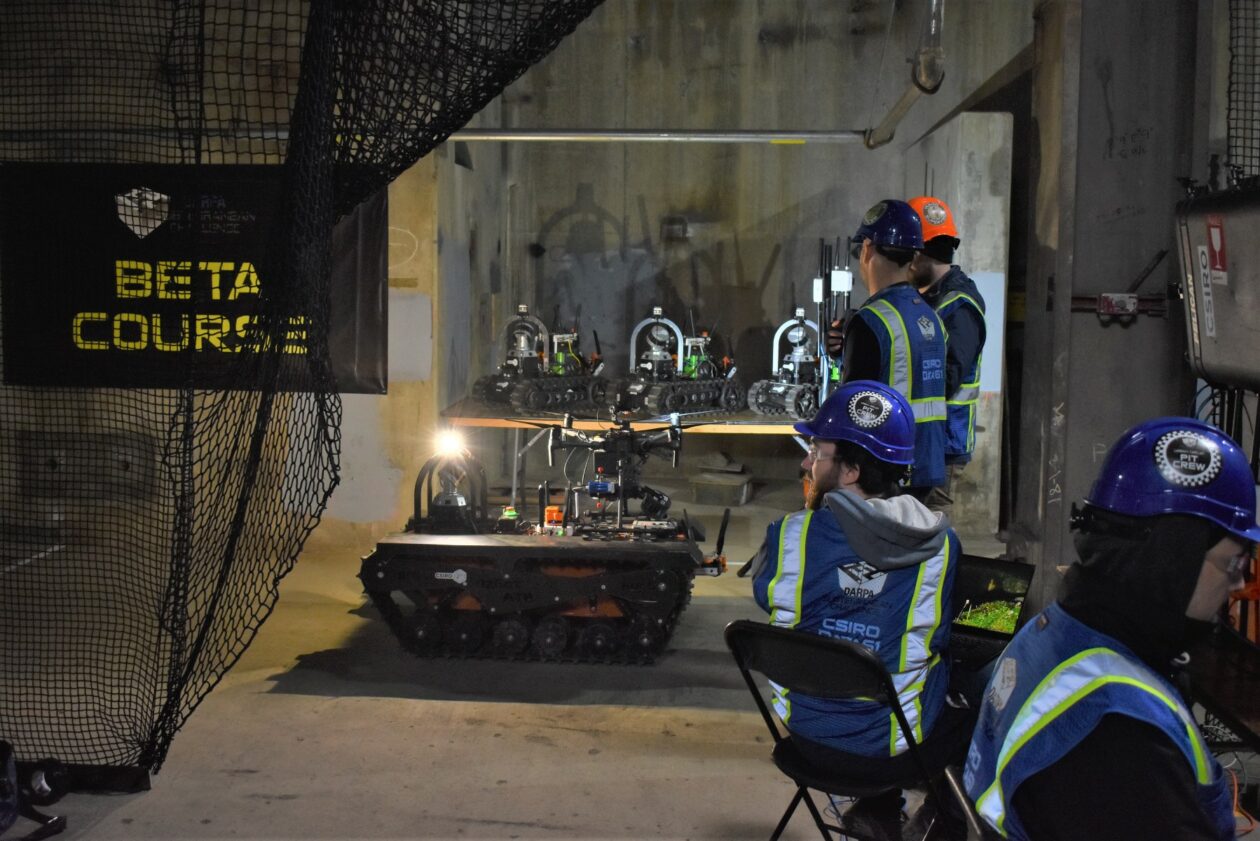 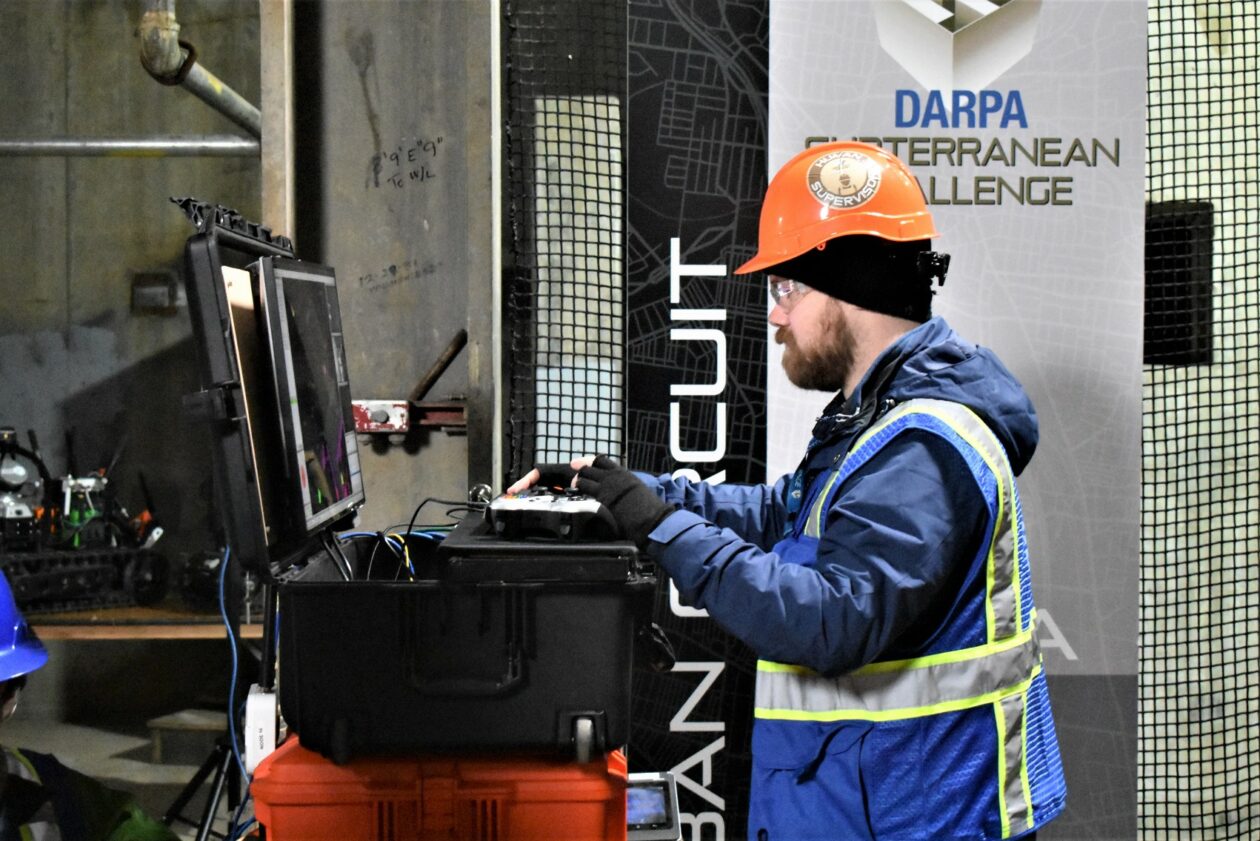 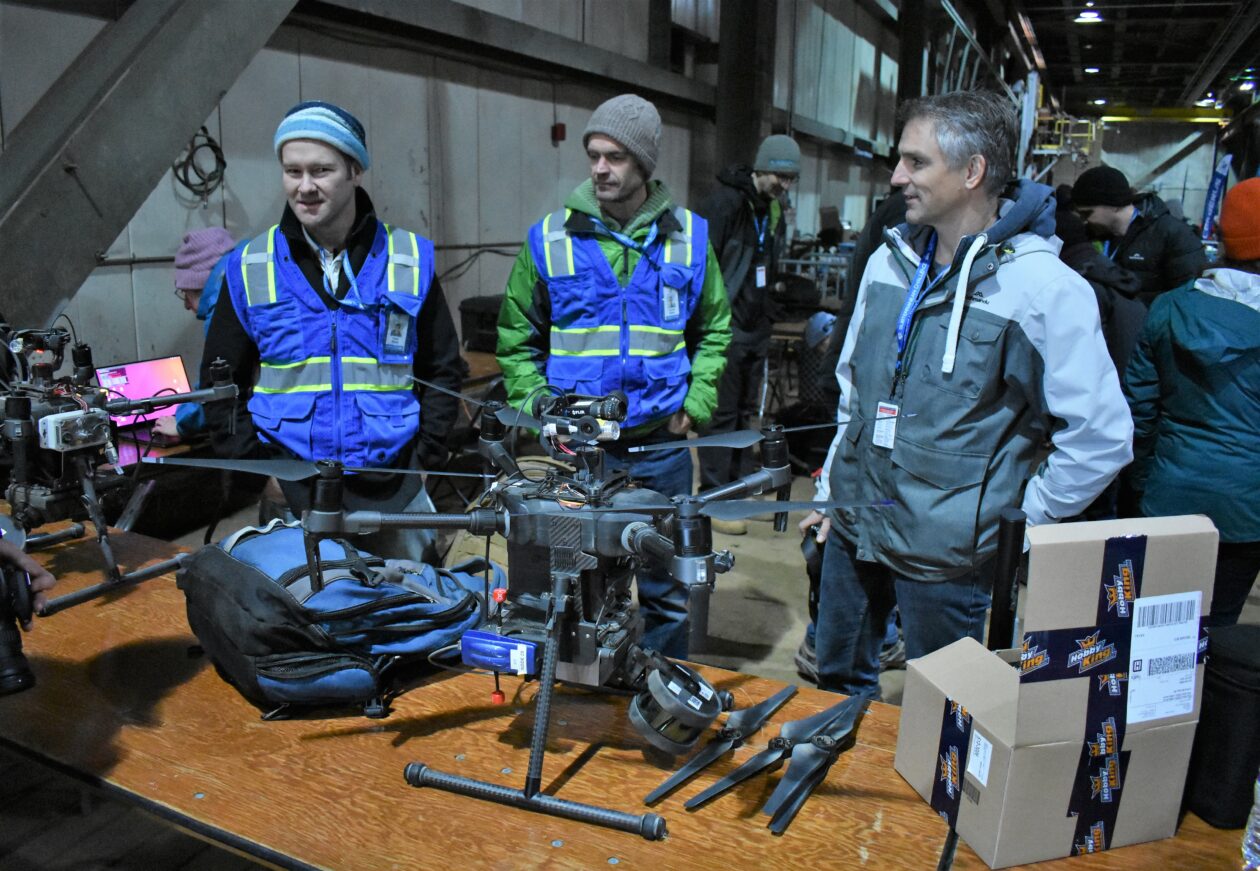 Members of the CSIRO Data61 team are all smiles after a robotic quest that relied on drones as well as ground-based robots. (GeekWire Photo / Alan Boyle) 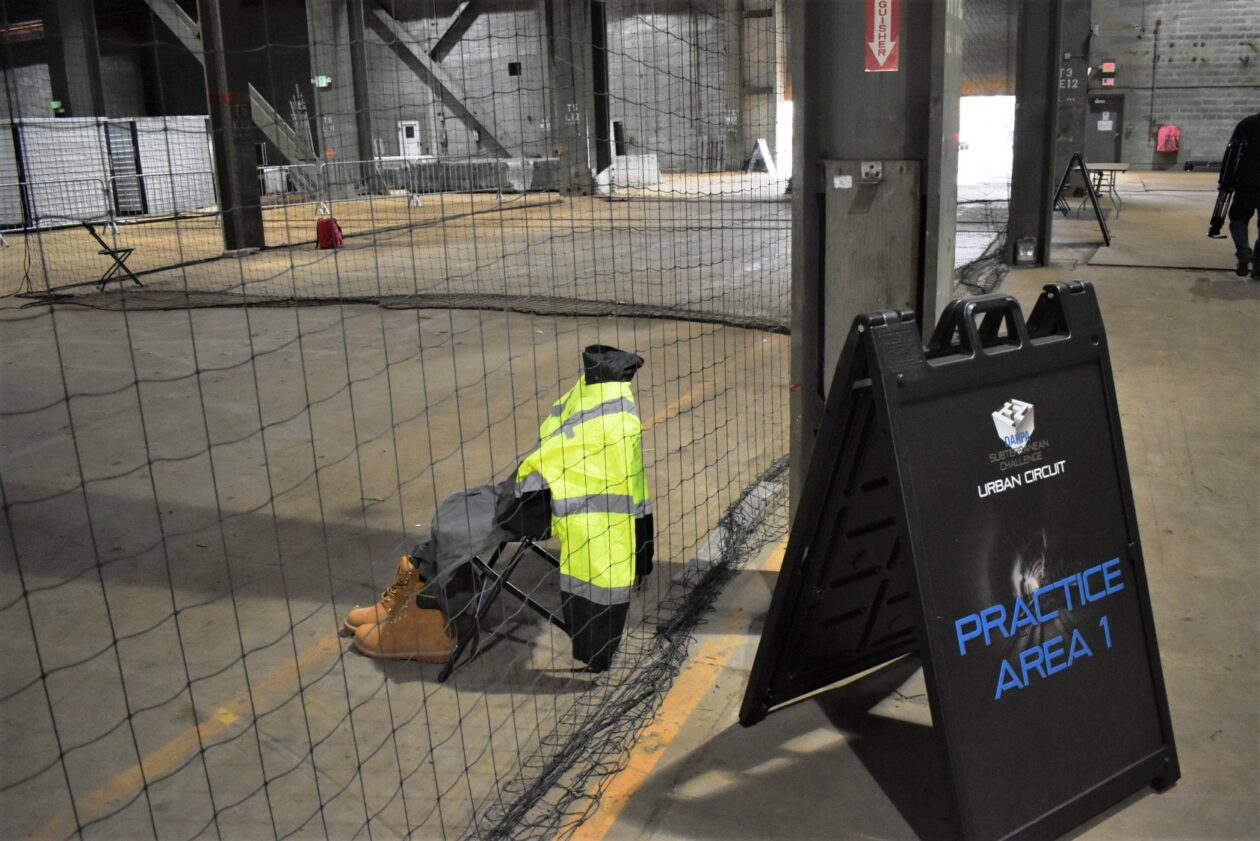 A practice area is set up with a red backpack and a mannequin similar to the artifacts hidden inside the maze. (GeekWire Photo / Alan Boyle) 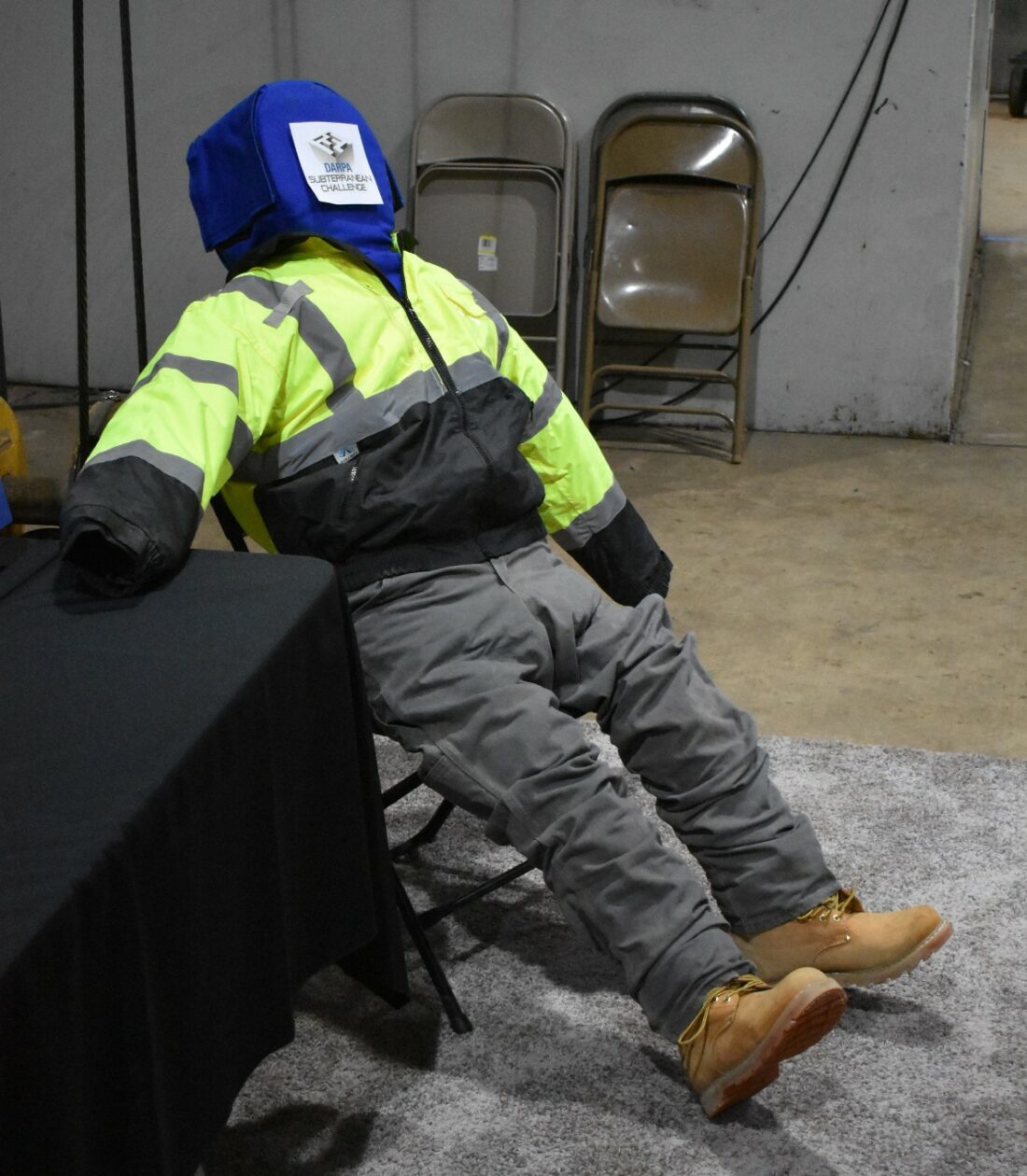 The mannequin that’s used as a target in the contest is equipped with a voice box. (GeekWire Photo / Alan Boyle)

The Satsop nuclear site was mothballed in 1983 and now serves as a business park, as well as a training site for first responders and the locale for gritty film projects such as the “Transformers” movies.

For this part of the Subterranean Challenge, Satsop’s unfinished reactor containment building was outfitted to become a maze of corridors and barricades, with stairs and shafts connecting different levels.

No human competitor was allowed inside the maze. Instead, the teams had to send in assortments of robotic ground vehicles and aerial drones to map the space and find a variety of “artifacts” scattered within.

The artifacts included a bright red backpack, a mannequin equipped with a voice box playing a recorded message, a cellphone playing a video over WiFi, an open air vent … and a hose leaking carbon dioxide. Some of the artifacts were tucked high up on ledges, where they could be seen only by a drone.

“We’re DARPA, and we’re mean, so we might hide things anywhere,” joked Viktor Orekhov, who designed the maze for DARPA.

It was up to the teams’ squadrons of roving and flying robots to detect the artifacts and report their locations back to their designated human operators, over hard-to-maintain wireless connections.

To establish communication links, the teams had to deploy multiple robots that were linked together by mesh networks. Some teams built their own palm-sized signal repeaters that their robots dropped on the floor along the route, like bread crumbs from the tale of Hansel and Gretel. Even then, the teams would occasionally lose the link and have to trust that their autonomous machines would stay on track by themselves.

Team members came to Satsop from across North America, plus Asia, Europe and Australia. A group representing the National University of Singapore had to leave some of their robots behind. “When we got here, they got held up at Customs,” said Arjo Chakravarty, one of the Singaporean students.

All winners, no losers

All of the teams shared a warehouse-sized space that was set up as a staging area for the competition. That gave them a chance to trade tips and tools, and gawk at the robotic menagerie. Team CoSTAR, which included roboticists from NASA’s Jet Propulsion Laboratory and MIT, brought along a couple of four-legged SpotMini robo-dogs from Boston Dynamics. A team of students from Taiwanese schools, including the National Chiao Tung University, showed off a couple of makeshift blimps.

Over the course of the week, each team was given two sets of runs through two different mazes set up at Satsop. Every time an artifact was found, a team scored a point. The Singapore team ended up putting a single point on the board, while Team CoSTAR took the top score with 16 points.

Today, Chung handed out the awards to the winners. Team Explorer, which paired Carnegie Mellon University with Oregon State University, won second place behind CoSTAR with 11 points. A Czech-Canadian team, CTU-CRAS-NORLAB, took third place with 10 points. CSIRO Data61 came in fourth with nine points — including the point that was earned for finding that gas leak.

One extra twist was that the teams who received funding from DARPA — including CoSTAR, Explorer and CSIRO Data61 — weren’t eligible for cash prizes in the Urban Circuit competition. That meant the top prize of $500,000 went to CTU-CRAS-NORLAB, while a $250,000 runner-up prize went to Coordinated Robotics, which finished sixth overall.

There was a parallel competition for teams that didn’t field physical robots, but instead hunted for virtual artifacts in computer-generated versions of the multilevel Urban Circuit maze. The top three finishers in the virtual competition were BARCS (a DARPA-funded team), Coordinated Robotics (which won an additional $250,000) and Robotika (which won $150,000). A team from Germany, the Flying Fitches, won a $100,000 prize in a tie-breaker.

Now the focus shifts to August’s Cave Circuit, with lots of details still to be planned out. Then there’s next year’s grand finale. For that event, all of the teams, even the DARPA-funded groups, will be eligible to win prizes of up to $2 million. But a bigger payoff is likely to come in the form of new innovations for autonomous machines — and new connections for the roboticists who will create those machines.

“They’ll have the confidence that comes from having broken a robot or two in this challenging environment,” Chung said. “And that confidence might be just what they need to go start a company, or create a lab, or address real problems that need additional attention.”

At today’s awards ceremony, Capt. Jimmy Walker of the Seattle Fire Department said he could hardly wait to see the robotic technologies pioneered at the Subterranean Challenge come out into the open.

“I was legitimately blown away by some of this technology,” Walker said.

He said the teams’ innovations could lead to future generations of remote-controlled or autonomous robots capable of detecting underground hazards, such as gas leaks or radiation leaks, without putting first responders at risk.

“We’re humans,” Walker said. “We’re sent downrange to solve problems, and we really like to do that. However, we do recognize that there are some hazards that are just to big for us, and we need help with that. Being able to remotely identify some of these hazards — that’s a critical piece for our first-responder community.”