What is it like to be homeless? How do you navigate around a crowded room in a wheelchair? Is teaching math in three dimensions a more effective learning tool?

University of Washington students showed how virtual and augmented reality technology can provide answers to these questions as part of a VR/AR Capstone Course that just wrapped up this week.

Projects were on display Tuesday at the Paul G. Allen School, where community members had a chance to try out games and apps that students developed over the past ten weeks. 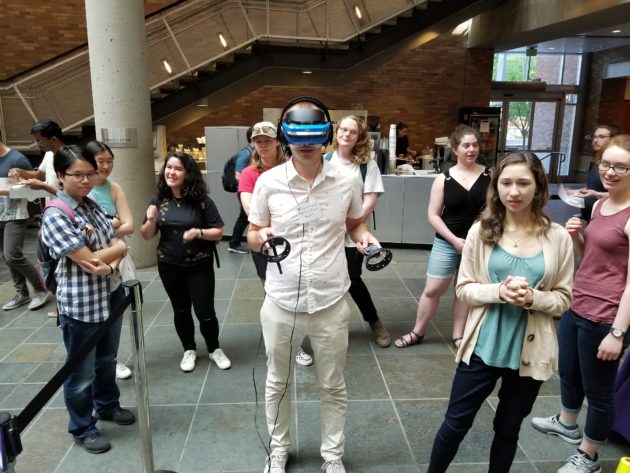 The Capstone Course has evolved since first launching in 2016, as more use cases become possible with software and hardware advances for virtual and augmented reality. The industry is still in its nascent stages, but with a market that could surpass $40 billion by 2024, the work being done by these students could very well pave the way for future applications and services.

Ilya Kucherov was apart of “Wheelchair VR,” a project inspired by an experience helping his cousin get around in a wheelchair. The team strapped bike tires to a chair, coupling it with an Acer headset and LeapMotion tracking technology. The demo forced users to get around bulky furniture in a restaurant and squeeze into small elevators or bathrooms.

“We wanted to create a lot of empathy and sympathy,” said Kucherov, a junior studying computer science. “We want people to really understand what it’s like to be in a wheelchair, to put them in a situation they normally have never been in.”

Empathy was also the main focus for the “Finding Seattle” team, which built a VR experience intended to help users understand daily hardships faced by people going through homelessness. The team worked with the Urban@UW’s Homelessness Research Initiative and spent time inside Salvation Army shelters to capture video footage that plays during its VR demo.

“Everyone who lives in Seattle knows that homelessness is a big issue, so it’s not really an awareness thing,” said Erika Wolfe, a masters student studying computer science. “It’s the experience of seeing it in first-person and having the narrative story talk about you — how you are getting evicted and how you are falling into homelessness and how you are going through shelter systems.”

Even projects focused around games had unique elements built-in, made possible by this new medium. “Cosmic Symphony” let users conduct a symphony orchestra by combining movement, color, and sound.

“I was interested in music and I’m visually impaired, so the visuals aren’t as accessible,” said UW senior Hannah Werbel. “Another person on our team is hearing impaired, so they were interested in the visuals. It was a really cool way to bring together those two things. And also, it was just fun and creative and we wanted to do something that hadn’t been done before.”

Students had a limited amount of time to ideate and develop their projects, making it all the more impressive when considering the depth and innovation of their work. The class was also designed to simulate an industry job experience.

“A lot of the students, they don’t know what’s impossible,” said David Kessler, a program manager at the UW Reality Lab. “They just figure it out and just do it.”

They were encouraged to think outside-the-box and experiment with new ideas, said Ira Kemelmacher-Shlizerman, a UW professor who helped teach the course. She was particularly intrigued by the empathy-related projects.

“I was skeptical of those in the beginning, but they are actually really powerful. By the end, it moved me,” she said.

The UW benefits by being in Seattle, a tech hub where companies such as Microsoft, Google, Facebook, and others are working on cutting-edge VR and AR technology. They partner with the UW and provide opportunities for students; for example, Capstone Course students got early access to the new Oculus Quest headset.

“The students are some of the first people to think about a world where people are wearing headsets a lot and what that enables,” said UW professor Steve Seitz. “These students will become the leaders of tomorrow for universities and companies, so having them take this knowledge with them is really great.”

The UW Reality Lab, which launched last year with the support of big players in the industry, is an additional example of what the robust ecosystem in Seattle enables. The connection between industry and university is also another reason why the UW was able to open a new computer science building this year.

Here are all the projects, with descriptions from the teams and links to more information about each: