What happens when a group of talented computer science students at the University of Washington get to play with a HoloLens device for 10 weeks as part of a first-of-its-kind class?

Well, a little bit of everything.

The UW hosted a demo day on Thursday afternoon for its first-ever virtual and augmented reality capstone class that gave students from one of the nation’s top computer science departments a chance to develop apps for Microsoft’s HoloLens device. 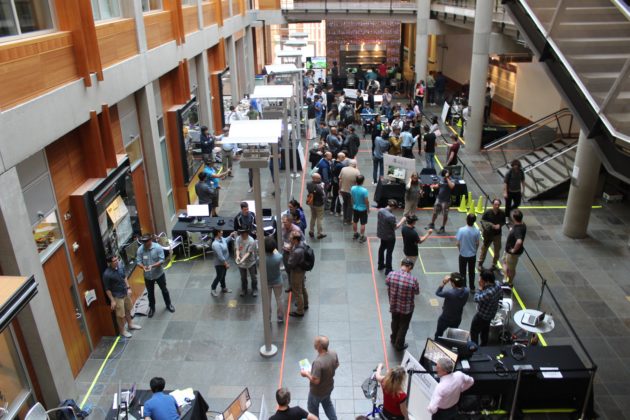 The energy inside the UW CSE building was buzzing as attendees tested out an array of fun and entertaining futuristic applications that ranged from making spring rolls to playing chess to learning piano to flying paper airplanes to destroying giant eyeballs.

“Some of the projects were really mind-blowing,” said Ed Lazowska, the Bill & Melinda Gates Chair for UW CSE. “What UW students manage to achieve in 10 weeks is amazing.”

This past spring, the department teamed up with HoloLens mastermind and Microsoft veteran Alex Kipman, who helped bring 25 HoloLens devices to campus for the students to use for the past 10 weeks.

“It was a pretty unique experience for everyone,” she noted. 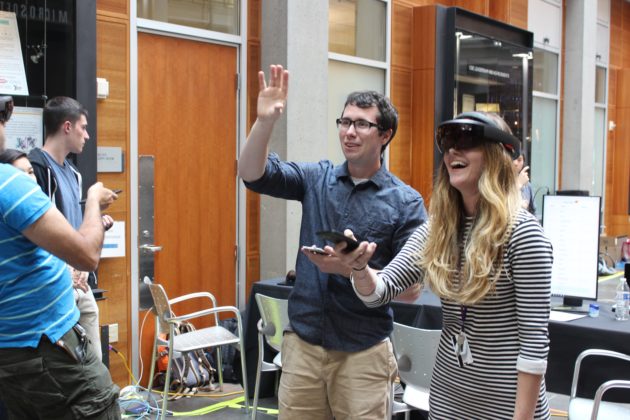 The class is a “capstone” course meant to give students a chance to form four-person teams and work on quarter-long projects, eventually coming up with functioning applications that were on display Thursday.

“It’s been really interesting knowing that we’re some of the first ones to get our hands on these things,” said first-year PhD student Isaac Tian, who answered GeekWire’s questions while donning a HoloLens headset.

The HoloLens apps, which you can check out here, included everything from “KeyboARd,” which helped people learn how to play piano, to “Augmented Cooking,” which had the longest line of folks on Thursday wanting to test out a demo that taught users how to make a spring roll.

There were eight teams that developed software on the HoloLens platform, while another team created a multiplayer game using both the HTC Vive and Oculus Rift. 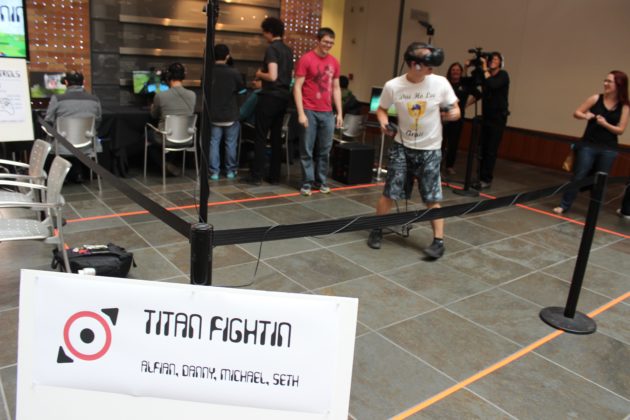 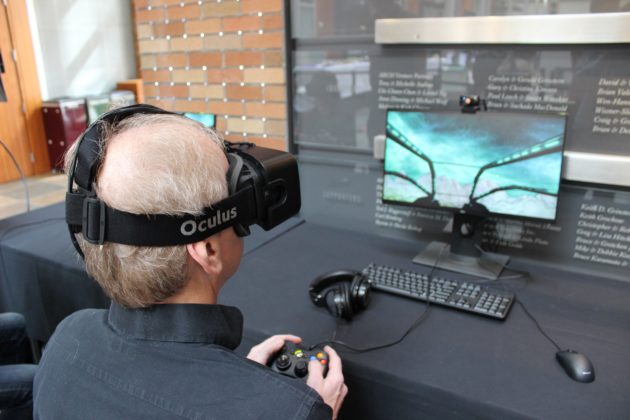 The applications weren’t perfect, but given the time constraints and novelty of the technology, the projects were impressive.

“The hardest part was trying to fine tune our ideas that we wanted to do in the amount of time we had,” said Michelle Cho, a fourth-year undergrad student. “We only had 10 weeks to build a fully-working app that had no lag and didn’t crash.”

The students, who had access to the Microsoft HoloLens development team throughout the quarter, all seemed to agree that their capstone class was a ton of fun. But it definitely wasn’t easy.

“We were all really terrible at interacting with HoloLens at first because we had no idea how to do it,” said Sonja Kahn, a fifth-year masters student.

But they quickly picked up new skills throughout the quarter, learning how to use platforms like Unity and other 3D development tools.

Steve Seitz, another instructor who taught the course, explained that a key part of the class was allowing students to come up with their own ideas for applications.

“We intentionally did not want to influence them,” he explained. “It was sort of like Kickstarter — they pitched ideas and we were effectively venture capitalists who helped guide them along those ideas, and shape them into things they could develop within 10 weeks.”

There was plenty of failure and stress throughout the quarter, the students said. Experimentation was a key theme.

“Thinking about the applications was hard because we don’t really have test cases to learn from,” said Panji Wisesa, a fifth-year graduate student. “We just try it out, try it out, and try it out. That’s what we had to do.”

The class also featured an impressive list of weekly guest speakers with expertise in VR and AR. Folks like Clay Bavor, Virtual Reality VP at Google, and Ashraf Michail, the software architect for HoloLens, stopped by each week to share knowledge and insight with the students.

There were a number of high-profile tech executives trying out the demos on Thursday, including people like Madrona Venture Group’s Soma Somasegar and Microsoft Research Corporate Vice President Peter Lee.

Michael Abrash, chief scientist at Oculus who also was a guest speaker this quarter, showed up again on Thursday and spent time testing the apps and meeting with students. Both he and Kipman declined to answer GeekWire’s questions.

Seitz said that the inspiration for the class came about given all the new VR and AR devices arriving on the market.

“It just seemed like a great opportunity to expose students to the technology and see what they could build with it,” he said.

In addition to learning how to develop software for new devices and platforms, the students also said they’ve been able to understand what could be improved.

“It’s familiarized us with the technical weaknesses at this point,” said UW graduate student Nick Reiter. “But alongside that, you also get to see glimmers of new directions this technology might take, beyond what you’ve seen in marketing. It’s definitely made us feel very strongly that something is going to be very important in this field.”

There are plans to offer a similar course next fall. Seitz added that VR and AR “very well might be the platform for the future of computing.”

“It’s useful for the students to experience this and learn the skills, because it’s likely they’ll be able to use that in their future software engineering lives,” he said.