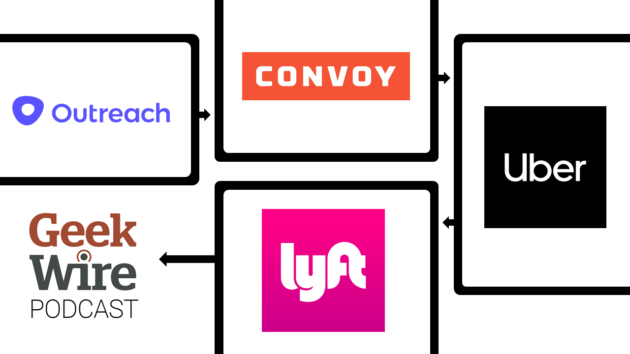 Seattle has a new unicorn, Outreach, the sales and marketing automation company that raised a $114 million funding round, pushing its valuation to $1.1 billion.

The news sends GeekWire co-founder John Cook and and me on a startup odyssey on this episode of the GeekWire Podcast, exploring the hidden connections among the new wave of public companies and tech behemoths in Silicon Valley and Seattle, including Uber, Lyft, and Convoy.

Here’s the thread of the conversation if you want to follow along.

This is part of the larger story about the wave of big fundings and IPOs from tech companies, sometimes called the “APLUSS” group, for Airbnb, Pinterest, Lyft, Uber, Slack, Stripe.

Meanwhile, Amazon and Microsoft are separately preparing to challenge Apple’s AirPods, according to new reports. As fans of the AirPods, we’re intrigued by the competition in this area of the tech sector, and we see this as an early step toward the new era of human-computer interaction. But we’re already seeing some unintended consequences.

Plus, on the Random Channel: Melinda Gates has a message for the tech industry, and John is determined to be a “Never Throner,” even as James Cordon makes one of his staffers watch every single episode back-to-back.