Not every entrepreneur can say they helped save Rupert Murdoch’s finger from falling off. But that was one of several fascinating life experiences shared by Seattle startup veteran T.A. McCann at The Playbook, our speaker series where entrepreneurs, founders and investors connect in a casual setting to hear what really happens inside early-stage companies.

McCann shed light on both his career as a company builder and also as a competitive sailor, parting advice to a packed house at The Ninety in Seattle’s Pioneer Square neighborhood Thursday evening.

Before he sold startups to Google and Blackberry, McCann was a professional sailor whose team won the America’s Cup in 1992. A few years later, he found himself helping sail Larry Ellison’s boat off the shores of Sydney. Ellison, co-founder of Oracle and a sailing fanatic, had invited Murdoch, the billionaire media mogul, along for a ride.

But a mini-disaster struck when Murdoch’s hand became caught in the rigging as the sailors lowered the sails. His finger sliced completely off.

“There were two of us on the boat that were trained medics,” McCann recounted on Wednesday. “So we got the finger, we packed it in ice, we bandaged his finger, packed his hand in ice, and sent Rupert and the finger off to the hospital. They sewed it back on and it’s totally working today. He’s still signing checks.”

That wasn’t the only challenge McCann overcame in his sailing life and at various startups. Read on for more from our conversation with McCann, who now serves as a managing director at Seattle-based Pioneer Square Labs where he helps supercharge new startup ideas. A big thanks to our sponsors Lane Powell and Seattle Bank for helping make The Playbook speaker series happen. 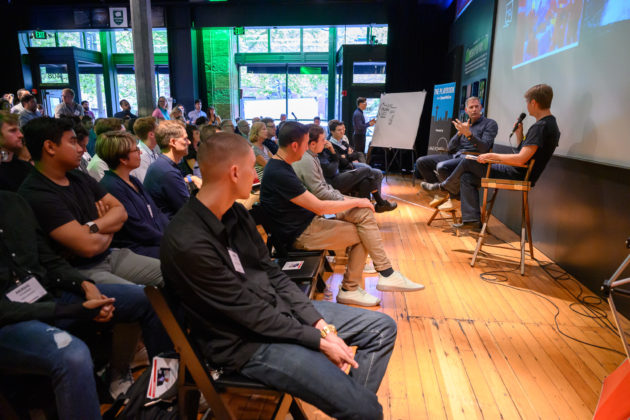 Back in 1993, McCann was competing in an epic around-the-world race. His team was riding in first place with a huge lead on one of the last legs when the boat’s mast broke. A wave of emotions overcame McCann and his teammates. The ultimate goal — winning the race — was no longer achievable.

McCann was prepared to get to land and go home. But the boat’s skipper had other ideas: he wanted to fix the problem and continue racing. The leader inspired the group to persevere by reminding his teammates of their responsibilities to each other; to themselves; to the sponsors.

So the sailors spent a few days fixing the mast and got back on route. They didn’t win, but the team crushed the competition on the final leg and it was “the best sailing day of my life,” McCann recalled.

He said it was a lesson in how reframing the definition of success can be beneficial — at sea or at your startup.

“We came in fifth overall because of the time difference we had when the mast fell down,” McCann said. “But in terms of emotional satisfaction — as a kid having a dream to do this, being able to do it well, to be able to have a failure and build back from it — to do that in a pretty demonstrable fashion was amazing.”

Entrepreneurs may face a similar dilemma when they are forced to shut down a startup — like McCann did in the early 2000s — or decide to sell to an acquirer. McCann said it helps to have people who care about you deeply to help crystalize the next step. It is also important to think about those responsibilities to yourself and others. When McCann decided to sell Gist to Blackberry and Senosis to Google, “it was about, is there a vehicle to realize our vision bigger, faster, better than doing it on our own?”

Just get on the team

In the vein of how lessons from sports can be imparted to the startup world, McCann is a big believer of not worrying about the details if an opportunity arises to join a cool company with awesome co-workers.

“Don’t worry about ‘this is my role,’ and ‘in the past I did this and I had this experience’ — there’s too much of that,” he said. “Just get on the team and just start doing work, because there’s a lot of work that needs to be done. And to the extent that you’re good at that work, then you’ll get rewarded. To the extent that you’re bad at the work but you work hard, they’ll find a different thing for you to do.”

McCann said he wasn’t the strongest sailor, but he was the fittest.

“I showed up first, I stayed last, I volunteered for the crappy jobs,” he said. “It’s the same in startups. Do the work; do more than you’re asked of; show up first; leave last. Just get on the team.”

Do well, do good

McCann is a fan of startups in his self-described “do well, do good” category.

“I want to lean into spending time on things that have a very clear do well, do good type of approach — and have a global impact,” he said.

McCann called out PSL spinout Boundless, which helps people get through the immigration process, and Seattle startup Volt Athletics, which develops fitness training technology, as part of that group.

Along those lines, McCann is paying close attention to the area of “quantified health,” or using data and technology to improve well-being or human performance. He sees this innovation as something that can ultimately affect millions of people around the world.

As for his personal “quantified health,” McCann said he’s seen revelations by simply tracking the correlation between sleep quality and resting heart rate. When he wakes up, he’ll check his heart rate — between 50-to-52 is his regular range. If McCann is under stress or hasn’t slept well or had a few too many beers the night before, he’s noticed that the rate jumps to around 57.

“If I live at 56, 57, 58 for more than three days in a row, I almost always get sick,” he said. It’s an example of using relatively simple tech to gain valuable insights — and it’s why McCann is excited for what else is possible.

McCann has had a successful career as a sailor and entrepreneur. But he’s certainly not perfect.

One area of his life that he’s trying to improve is finding the right balance when it comes to pushing others to be great. His brother and former co-founder Rob noted that “he is always pushing himself and those around him, and can become disappointed when others are not pushing themselves.”

McCann admitted that “it’s not always the best personality to be around,” and it’s created negative implications at work and at home.

McCann has lived by the motto, “happy but never satisfied,” for a long time. It’s what drives him to do more. But not everyone wants to adhere to that.