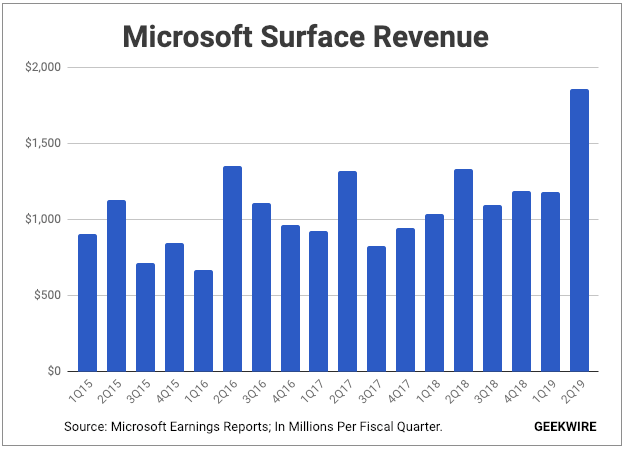 Microsoft Surface just had its best holiday season yet, leading to a record quarter for the hardware group.

Microsoft reported $1.86 billion in Surface revenue in the company’s second quarter, up a whopping 39 percent over a year ago. The breakout comes after a couple of years of flat sales during the busy holiday period.

Microsoft CEO Satya Nadella briefly mentioned the growth of the Surface division in a call with investors Wednesday, saying the group had its “biggest quarter ever this holiday.” He said its newest devices set the bar for the industry.

Microsoft has high expectations for Surface going forward. On a call with investors, Microsoft CFO Amy Hood projected revenue growth of more than 20 percent for Surface next quarter, and she said the group will account for a larger share of the revenue mix for the More Personal Computing division that it falls under.

Microsoft did its best to juice holiday sales this year. In October, the company unveiled several new and refreshed devices, including the next generation of Surface Pro, Surface Laptop and Surface Studio. It also debuted a surprising new offering: the $350 Surface Headphones.

Like other parts of Microsoft, the hardware division was suffering as recently as a few years ago, reeling from a $900 million financial blow. But the decision to focus on productivity applications, and a series of hardware hits, starting with Surface Pro 3 in 2014, established Microsoft as a top 5 PC vendor in the U.S. by unit shipments, with an estimated 602,000 units shipped in the third quarter.

“The company has finally found its stride in hardware, it has a much better understanding of the mechanics needed to produce premium hardware, and it has achieved its goal of setting a higher bar for PCs,” tech journalist Brad Sams writes in the new book “Beneath a Surface.” “While the company has yet to achieve the same level of admiration that is afforded to Apple, there is no doubt that Microsoft is headed down that path.”

In the book, Sams lays out potential roadmap for upcoming Surface releases, though he cautions the dates are a ways out, so things could always change. Here’s the possible roadmap, per the new book: