NEW YORK CITY — I spent a little time across the country earlier this month in New York City and had a chance to check out how some of Seattle’s biggest companies are blending digital innovation with brick-and-mortar retail.

First was Starbucks, in a test of the coffee giant’s new shop for mobile order pickups — read my review here.

Next up: another iconic Seattle retail brand, Nordstrom, and its massive new flagship store at 57th and Broadway on the south edge of Central Park.

Read on for a full recap, but here are the quick takeaways: 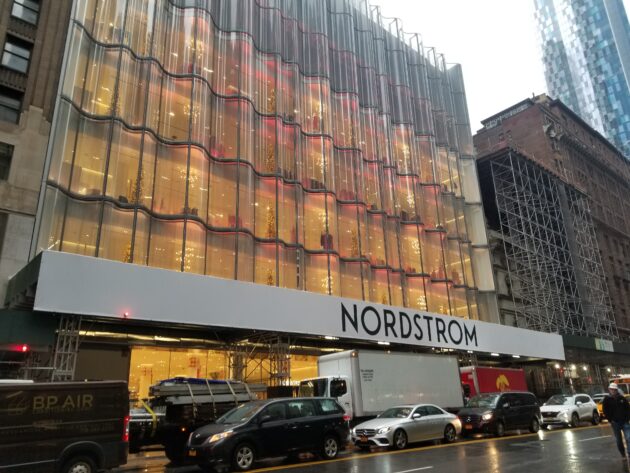 Next up on the Seattle-companies-doing-cool-things-in-NYC: checking out Nordstrom's epic new 320,000 square-foot flagship store that opened in October. Here's a message from Santa, who apparently loves Seattle and @geekwire! pic.twitter.com/kwsYgr4YS7

Women’s and children’s is the focus at the new flagship, which is Nordstrom’s largest investment in a retail location to date — and it certainly shows. 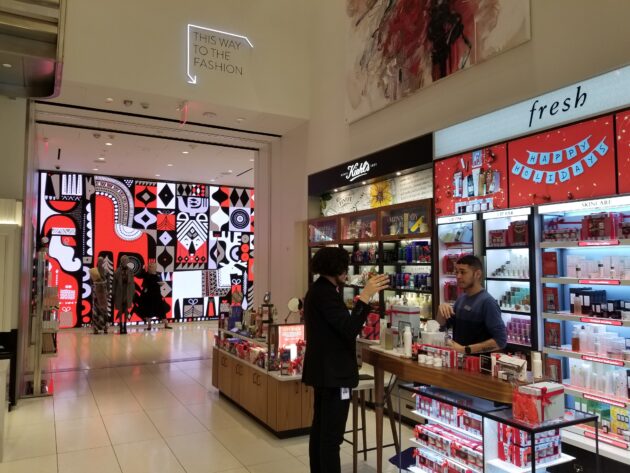 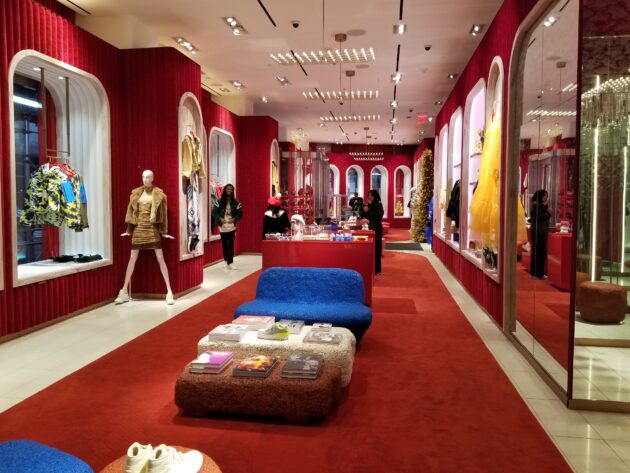 There is traditional Nordstrom flair throughout — plenty of shoes; excellent customer service; and an array of hip products from top fashion companies. The Beauty Haven offers various services such as manicures, facials, blowouts, light therapy, and even injectables.

If you need a bite or drink in between shopping, five eateries and two bars provide a medley of options. Seattle chefs Ethan Stowell and Tom Douglas worked on three of the restaurants, including Jeannie’s, which I can confirm makes tasty wild salmon. There’s also the Shoe Bar, located next to the shoes, and a classy Broadway Bar.

But aside from its gargantuan size and the Nordstrom norms, there are aspects that make this particular store unique, including several tech-infused features.

For example: an augmented reality experience called Lipstick Finder that lets people “try on” 400 lipstick colors, and the “Beauty Stylist Virtual Mirror,” which does the same, but for makeup trend looks. 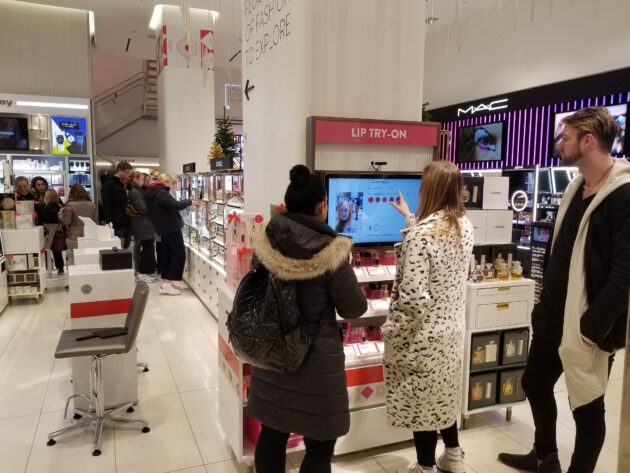 The “Fragrance Finder” is an interactive quiz designed to help customers find a particular scent. There’s even a button that lets out smells. 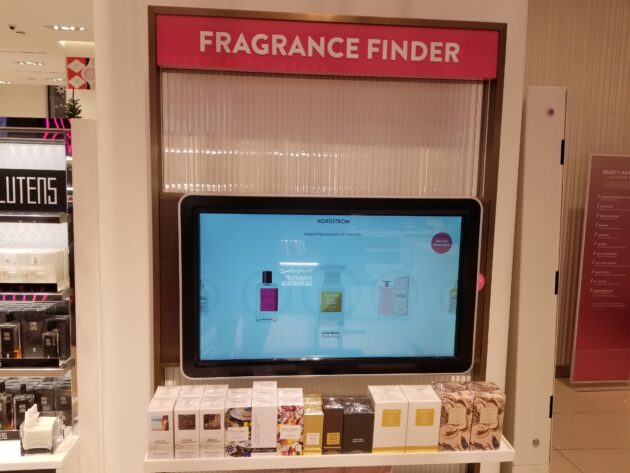 Wayfinder maps and phone charging stations are spread throughout the store. Returns can be made at an automated kiosk that only requires a QR code scan.

Personalization is a theme; customers can get everything from shoes to phone cases custom-designed in-store. The Stylist Lounge is also part of the 1-on-1 treatment.

There is also a big emphasis on e-commerce, with dedicated spaces for Trunk Club, Nordstrom’s online personal styling service, and the “Express Services” area where customers can pick up their online orders 24/7 and try on clothes, or have items shipped to their home.

I gave the system a test, placing an order for two shirts I found while browsing online. The items were ready for pickup the next day. 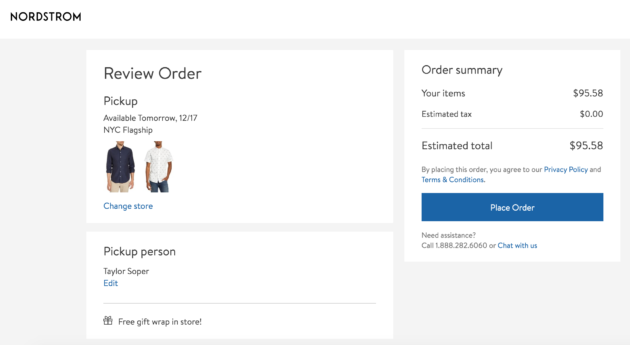 This concept is catching on with retailers and consumers; “buy online, pick up in store” orders have grown more than 40 percent year-over-year, according to Adobe Analytics data.

It’s also a key part of Nordstrom’s market strategy. Total company digital sales grew 7 percent and represented 34 percent of the business in the third quarter, up from 31 percent last year. Half of the digital sales growth came from in-store order pickup, which is the company’s most profitable transaction.

“Investments in digital capabilities, along with assets of people, product and place, enable us to serve customers on their terms,” Erik Nordstrom said on the earnings call. “Our goal is to gain market share while driving customer engagement and inventory efficiencies.”

The line of people and stacks of bags at Express Services showed the popularity of order pickup. 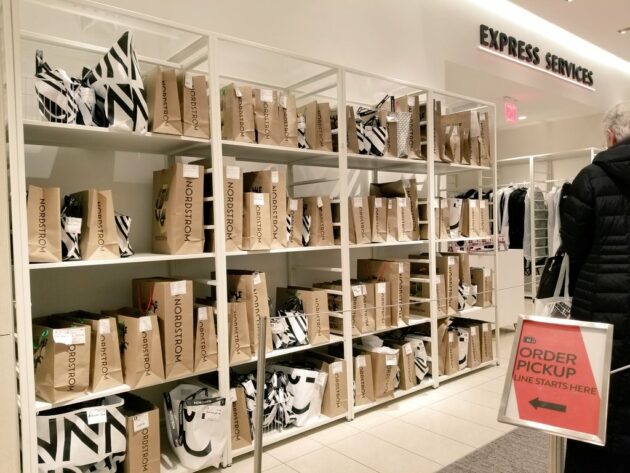 An employee scanned a barcode in an email I received notifying me that the order was ready. Before leaving, I wanted to make sure the shirt fit, so I hopped into the adjacent dressing room.

It was nice being able to try on what I ordered. The dressing rooms have a touchscreen that let you call for on-demand alteration services. The sleeves were a bit long on my shirt, and within seconds after pressing the button, a tailor showed up. She took a look at what I needed done and gave me an estimate. I ended up passing, but I really liked the tech-enabled customer service.

That extra touch — and the entire store experience itself paired with online ordering — can give Nordstrom an edge against competitors such as its Seattle neighbor Amazon, which has become one of the top U.S. apparel retailers without a physical retail footprint for clothing.

“Leveraging existing store assets and digital capabilities enabled us to implement this shared inventory approach without making additional material investments,” Erik Nordstrom said on the earnings call, in regard to the company’s market strategy.

Nordstrom’s digital efforts have gone through a series of fits and starts over the years, including reorganizations and layoffs in the past. Edmond Mesrobian, a veteran of grocery retailer Tesco and online travel giant Expedia who joined Nordstrom as CTO in 2018, earlier this year announced plans to reorganize the retailer’s digital division.

Nordstrom has invested around $900 million this year in technology-related initiatives, up from $600 million in 2018. Its stock fell this year by nearly 50 percent but has shot back up since August, currently trading at $40.90/share.