NEW YORK CITY — This isn’t the “third place” that helped Starbucks grow into a $100 billion juggernaut — but it may be an important part of the company’s future.

Starbucks just opened its first pickup-only store last month in New York City, dedicated to customers who order ahead with the Starbucks app.

I had a chance to test the new concept out. My takeaway: the store works exactly as described, and you can expect Starbucks to roll out more Pickup locations across big cities worldwide. 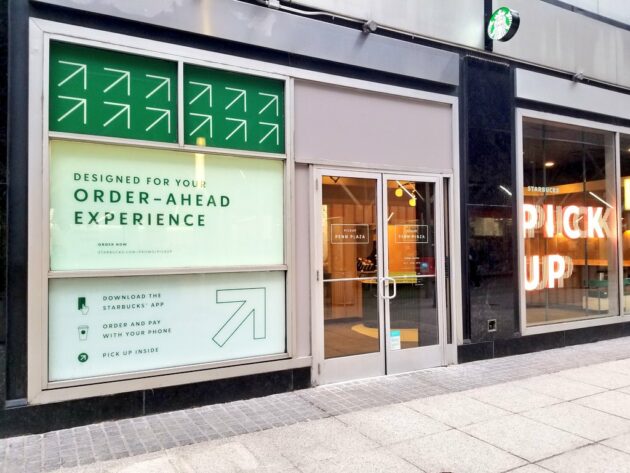 The Seattle coffee giant debuted its mobile order-ahead app feature (also known as Mobile Order & Pay) in late 2014 and it quickly caught on with Starbucks Rewards members — so much so, in fact, that the innovation created a congestion problem inside stores.

The Starbucks Pickup concept is the latest evolution of the order-ahead idea. In 2017, Starbucks piloted a version of the Pickup concept for employees at its Seattle headquarters. And this past July the company opened its first Starbucks Now store in Beijing that focuses on mobile orders and delivery.

But the New York City location at Penn Plaza in the heart of Manhattan is the first official store meant solely for people who place an order with their smartphone. 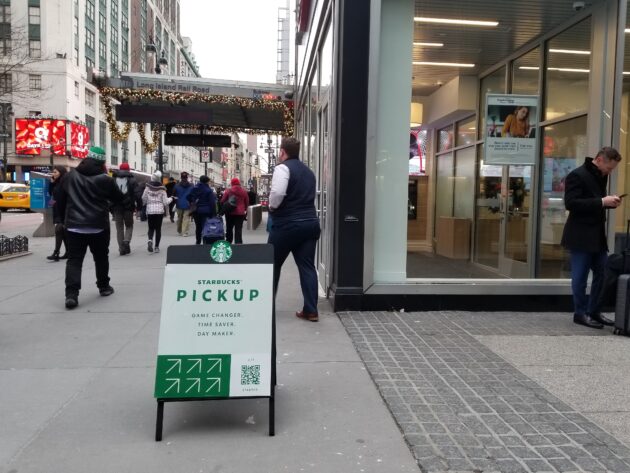 The process works just like any other Mobile Order & Pay transaction. You pick items in the app and set the pickup location for “Pickup — Penn Plaza” at 242 W 34th St. You’re given an estimated wait time so you can ideally walk in, grab your brew, and walk out within seconds.

It was a cold and rainy afternoon in the Big Apple, so I opted for a Comfort Wellness Brewed tea. I had a little trouble ordering at first, which seemed related to an old Rewards account I hadn’t used in years. Creating a new profile did the trick.

I submitted the order just outside the store and had a few minutes to check out the interior as my drink was prepared. 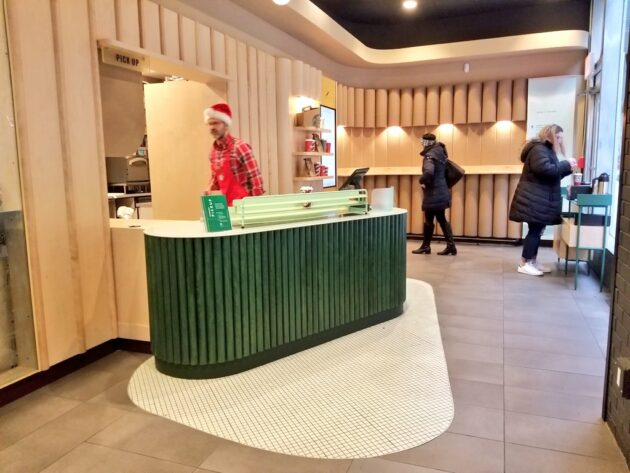 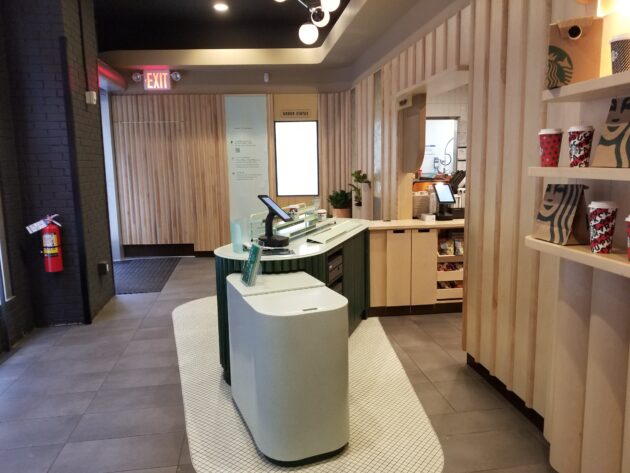 This was definitely the tiniest Starbucks I’ve ever been in, but roomy enough for people waiting on their orders. The interior design was minimal — no mugs for sale or tables to sit at — but the wood paneling and green colors made it feel somewhat on-brand.

Several customers came in and out within minutes. One told me that she absolutely loved the concept — “I thought mobile ordering was cool, but this…”

There were two sets of “How It Works” instructions on the wall, in case people walk in not knowing about the new process (traditional payment options are available, but customers are encouraged to use the app). A “Delivery” sign was also lit up, though it’s not clear how the location is being used for Starbucks delivery, which has steadily rolled out across the U.S. 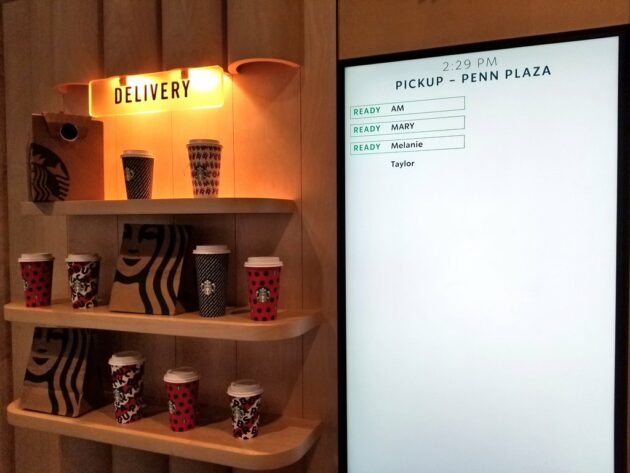 A monitor showed my name. There was a small table for cream and sugar. A few workers behind the counter prepared drinks and food.

When Starbucks tested a prototype of Pickup at its innovation center in Seattle, baristas complained about constrained space and an inability to connect with customers — those problems seemed to have been addressed. 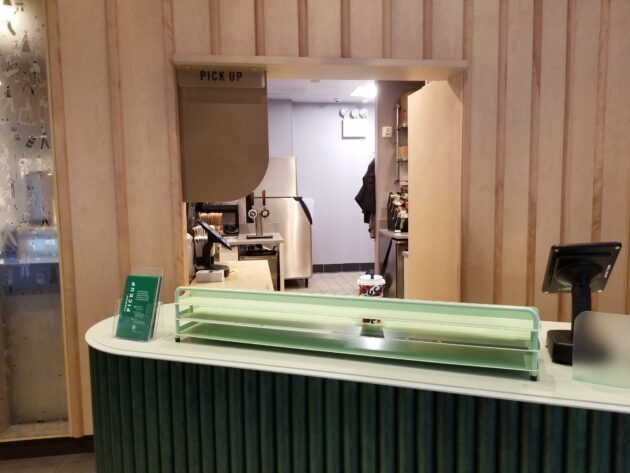 Completed orders are typically placed on the counter, but the barista hand-delivered my drink — a nice touch.

My only complaint: one of my tea bags broke within minutes. It’s a recurring problem I’ve had with Starbucks tea — this could be the company’s next innovation project, perhaps? Luckily, the store was happy to give me a replacement.

So why is Starbucks doing this?

It’s a new way to think about the company’s original “third place” strategy, which was to offer a physical meeting spot for customers between home and work. At its annual shareholders meeting in March, Starbucks said it would focus on convenience, comfort, and connection with its brick-and-mortar plans.

“I don’t want anyone to walk away today thinking this is about furniture or a new renovation strategy,” Starbucks COO Roz Brewer said earlier this year. “Reimagining the third place is about listening to our customers, so we can better position our business now and for the future.”

Pickup lets Starbucks save expenses on real estate and labor while catering to a significant chunk of its customer base, as more and more people get comfortable with ordering via smartphone.

Mobile orders represented 14 percent of all U.S. company-operated transactions in Q4 2018, the last quarter when Starbucks reported that metric. Rewards membership in the U.S. grew 15 percent to 17.6 million in the most recent quarter; Rewards transactions account for nearly half of tender in U.S. company stores.

Starbucks CEO Kevin Johnson, a longtime tech exec who took over in 2017, told Bloomberg that Pickup could expand to cities such as Seattle, Chicago, and other large metros.

The stores could also become a hub for delivery orders, much like Starbucks is doing in Beijing with Starbucks Now.

In some ways, Starbucks is following in the footsteps of Luckin Coffee, its key competitor in China, which focuses on opening smaller shops that cater to online orders. The concept is also catching on with some smaller independent shops such as Bandit in New York City.

Tech investments are perhaps even more crucial for Starbucks in China, where digital orders represented 10 percent of the company’s business this past quarter, with 7 percent from delivery and 3 percent from Mobile Order & Pay

Starbucks also this year announced a partnership with Microsoft; inked a deal with Brightloom; and put $100 million in Valor’s tech-focused Siren Ventures Fund.

Much of the company’s innovation R&D is happening at the Tryer Center, a new space at its HQ in Seattle that opened earlier this year.