Now you can add “farming as a service” to the list.

That’s what Infarm is going for, with hydroponic plant-growth cabinets that shrink the acreage needed to grow fresh greens to fit in a grocery-store aisle. The startup, based in Berlin, Germany, has just opened up its first North American “farms” inside a pair of QFC supermarkets east of Seattle, at Bellevue Village and here at Kirkland’s Urban Plaza.

The process began a few weeks earlier at a distribution center in Seattle’s Georgetown neighborhood, where the seedlings for herbs, kale and lettuce got their start. After about a week, Infarm’s urban farmers transferred the plants to on-site grocery cases, where they’ve been spending the past few weeks reaching maturity in a closed, temperature-controlled environment..

LED lights shine with a magenta glow that’s optimized for growth, while a hydroponic system feeds and waters the greenery. The plants sit in circular trays that are designed to give the roots more room as they grow. Infarm says its process uses 95% less water and 75% less fertilizer than soil-based agriculture.

Infarm’s cloud-connected sensors keep track of more than 200,000 plants that cycle through the system every month.

“The idea is to have a global network that’s also hyperlocal,” Evita said. “It’s grown in stores, hyperlocal. But it’s global: Each of these farms is connected to the cloud, if you will, where we collect data from all of our farms around the world. At any farm, at any time, we know the pH, the temperature, the nutrient levels. We know everything about what’s happening to the plants, and we can adjust accordingly.” 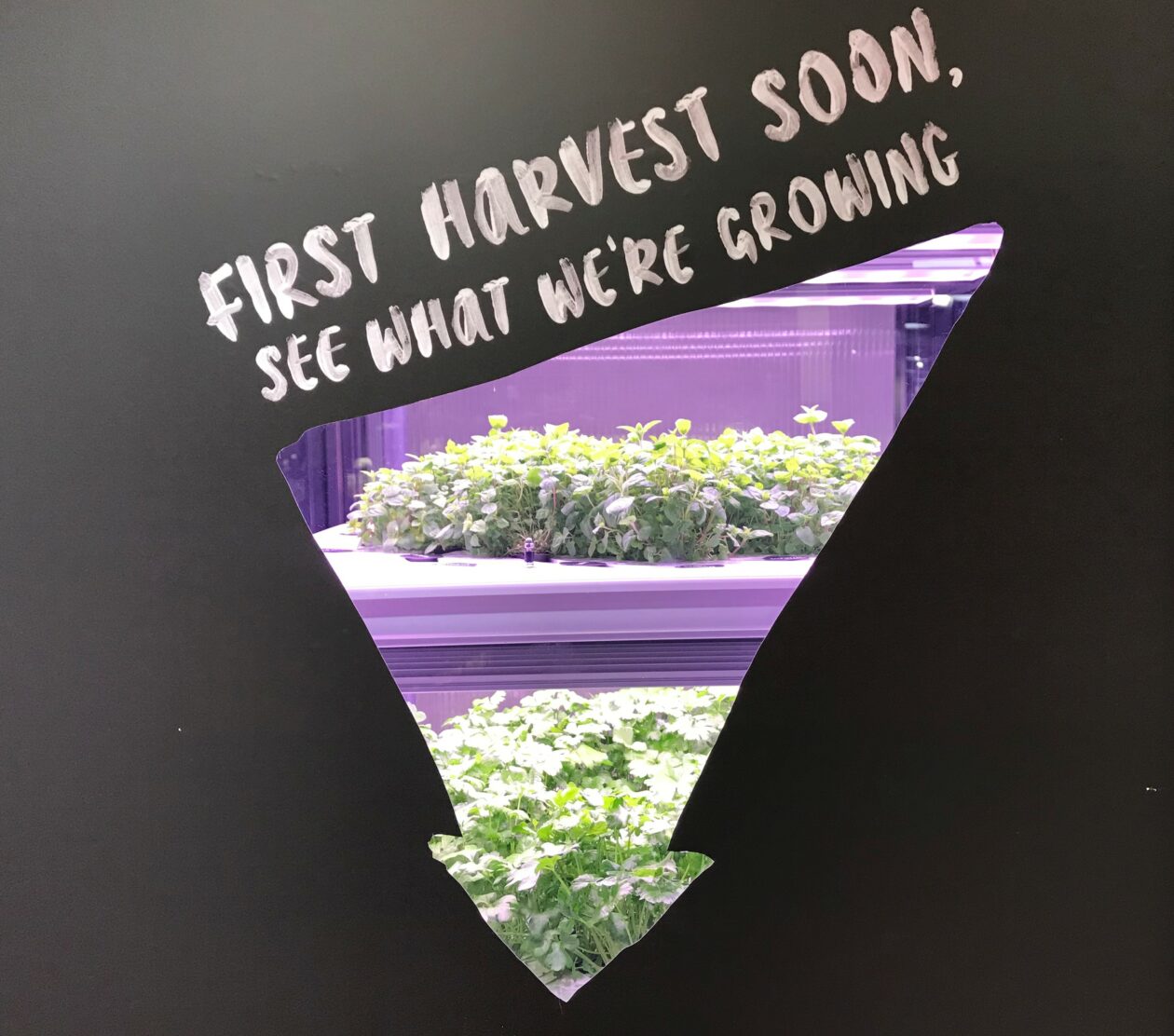 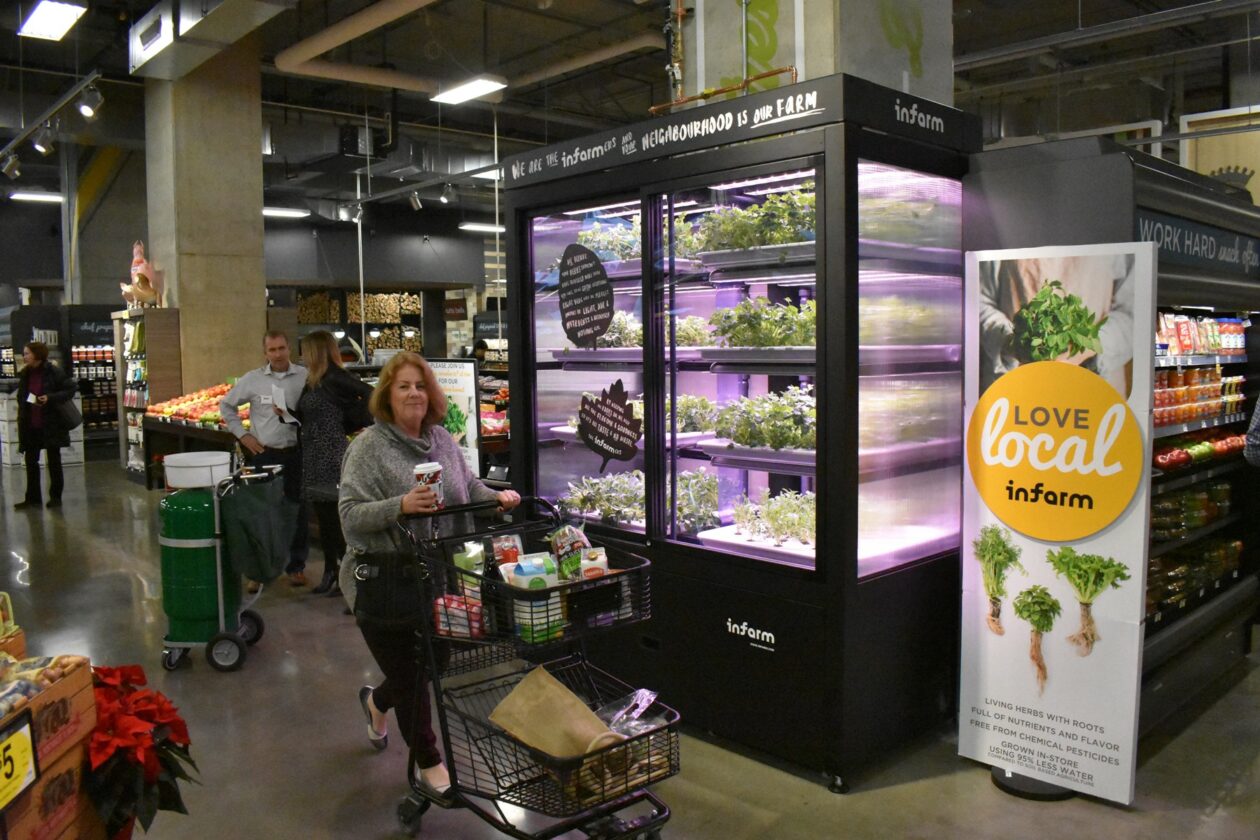 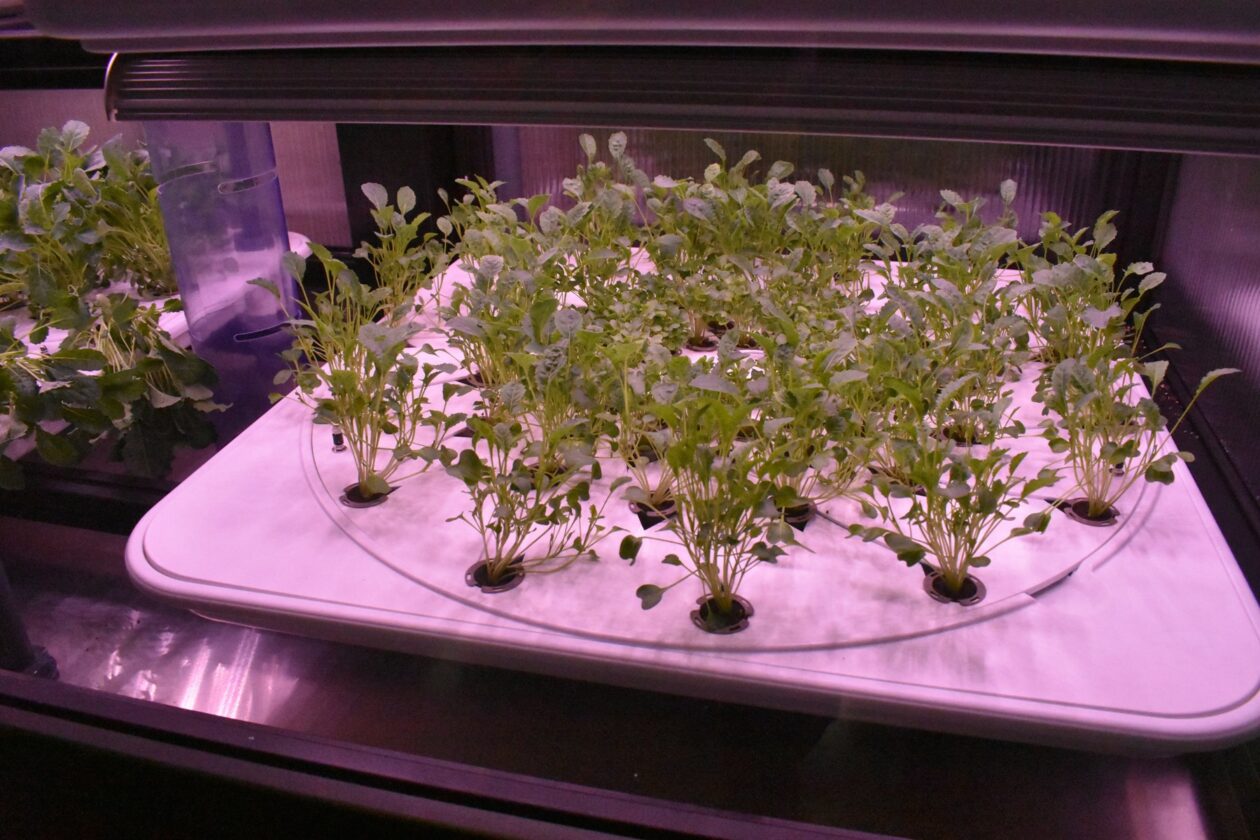 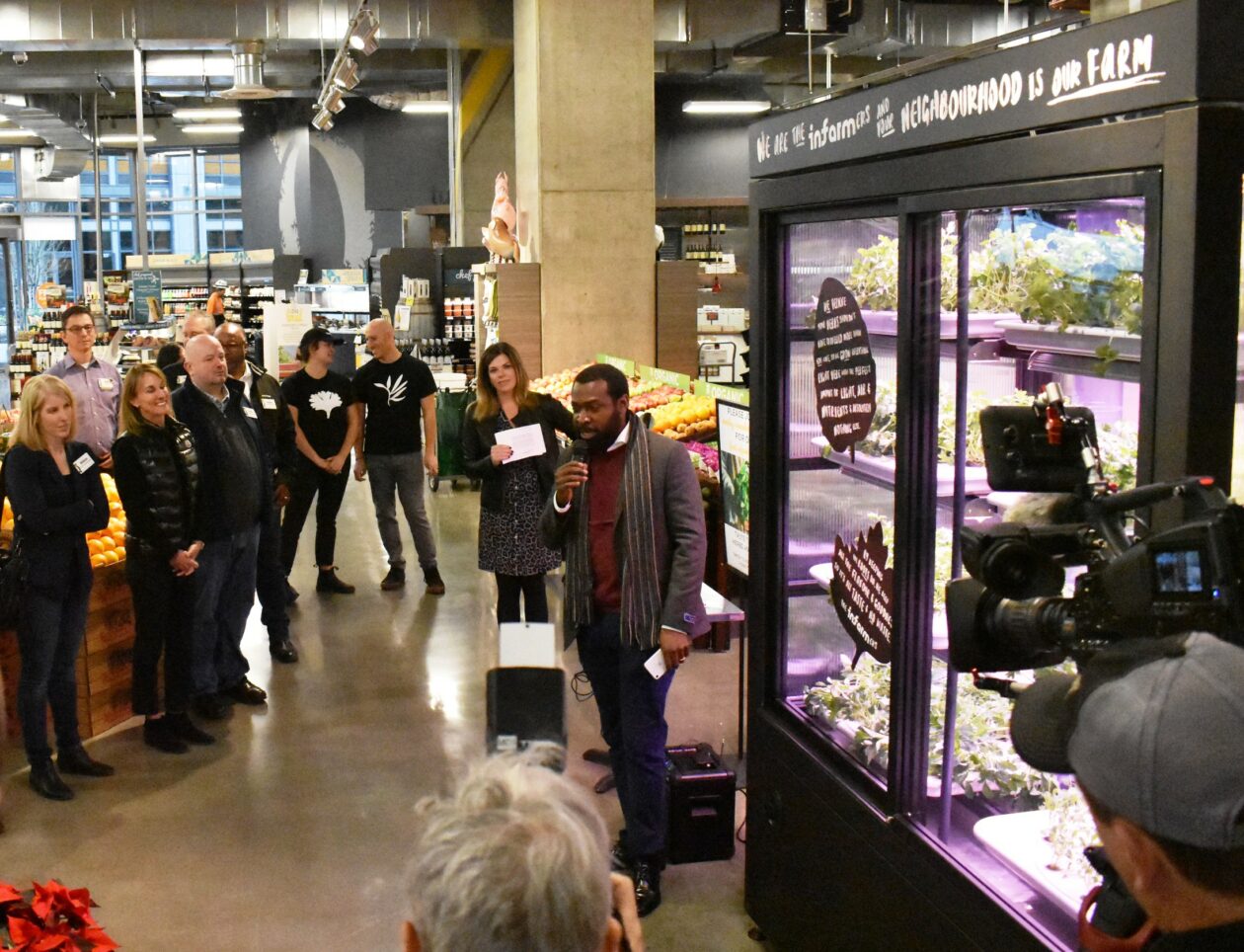 Representatives from Infarm, the City of Kirkland, QFC and Kroger gather for the “first harvest” at a plant-growing kiosk in Kirkland. (GeekWire Photo / Alan Boyle) 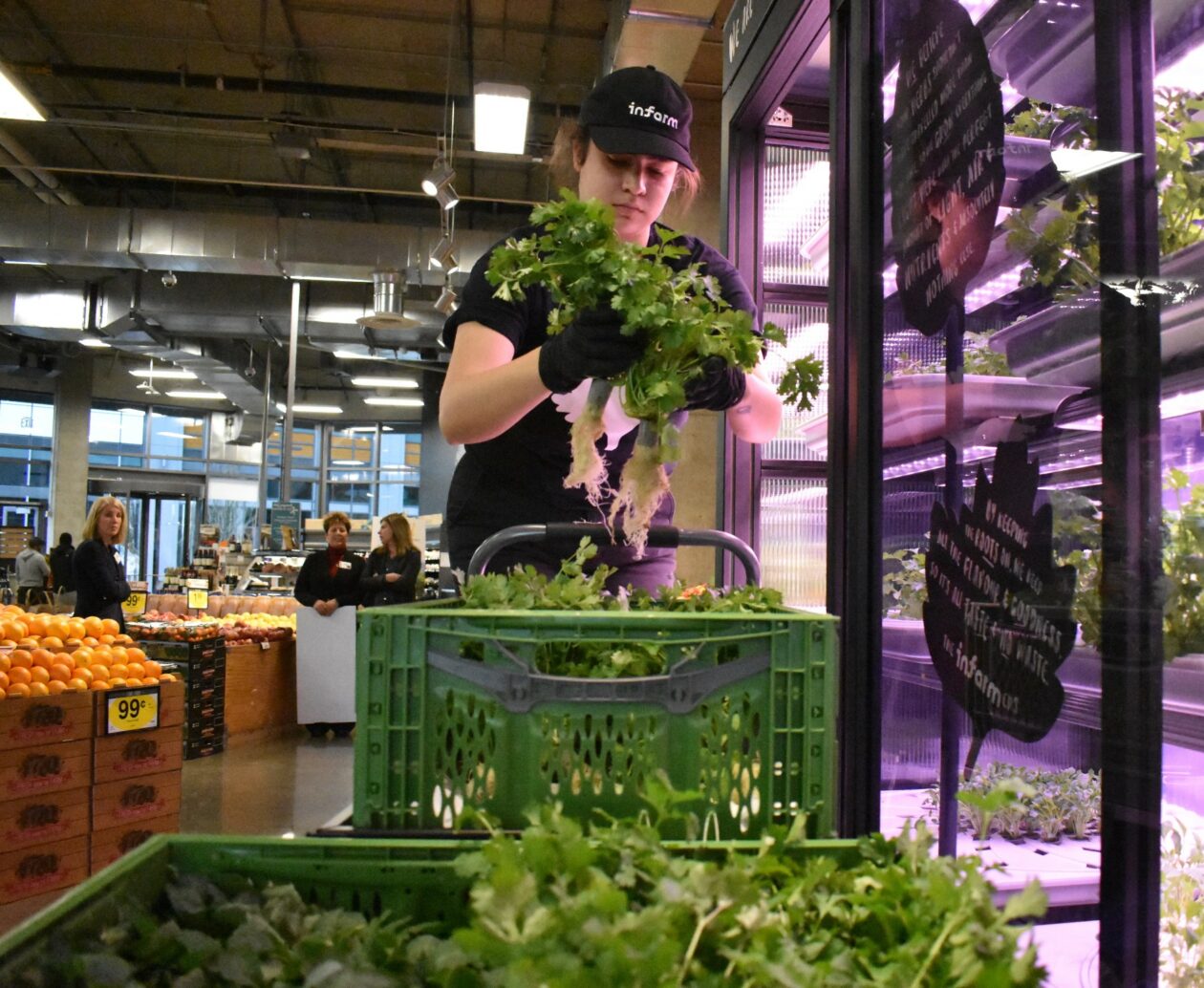 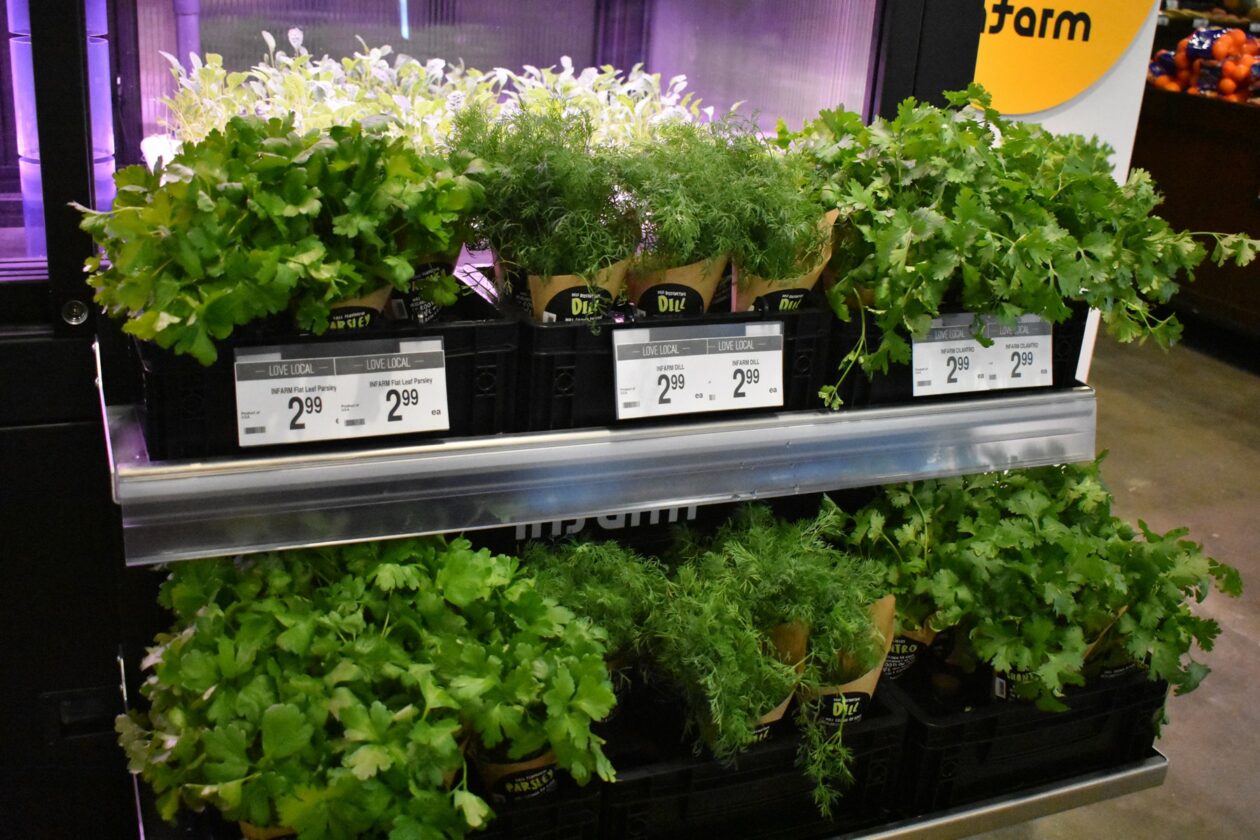 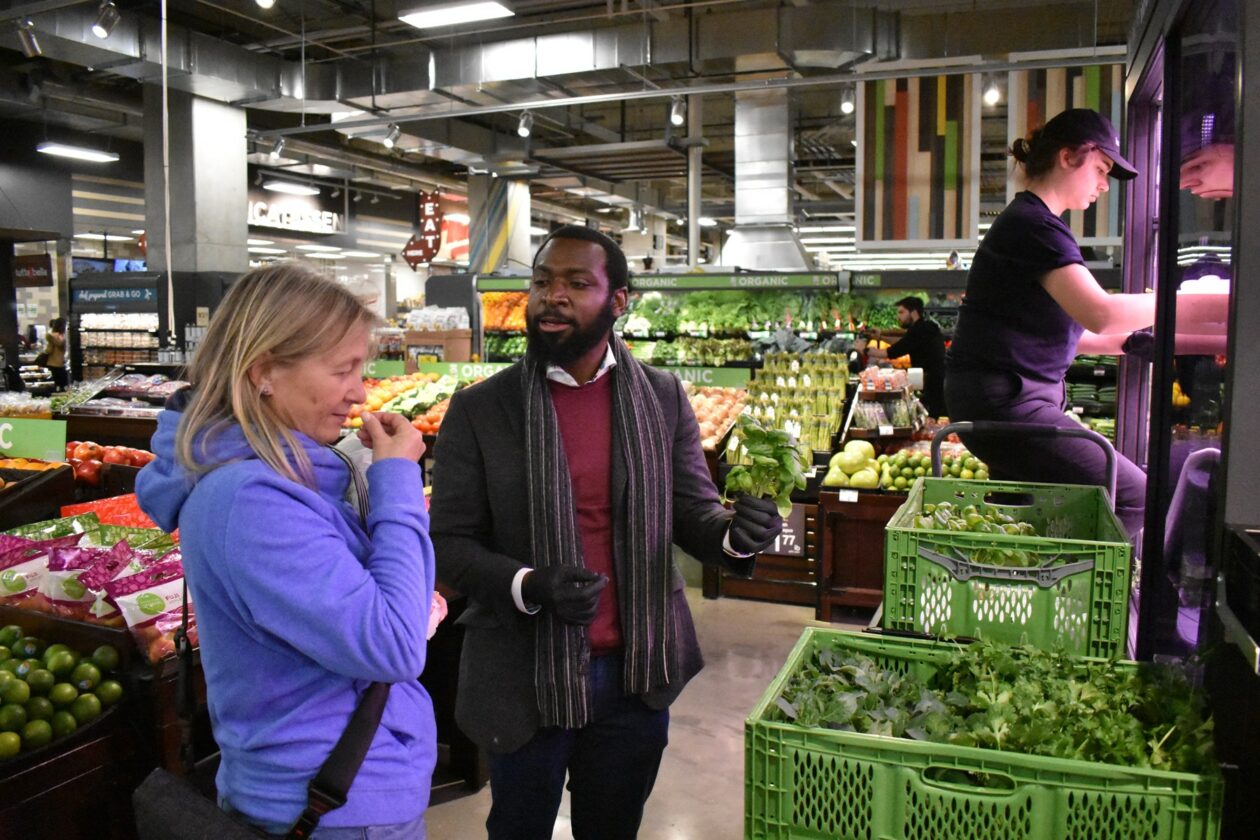 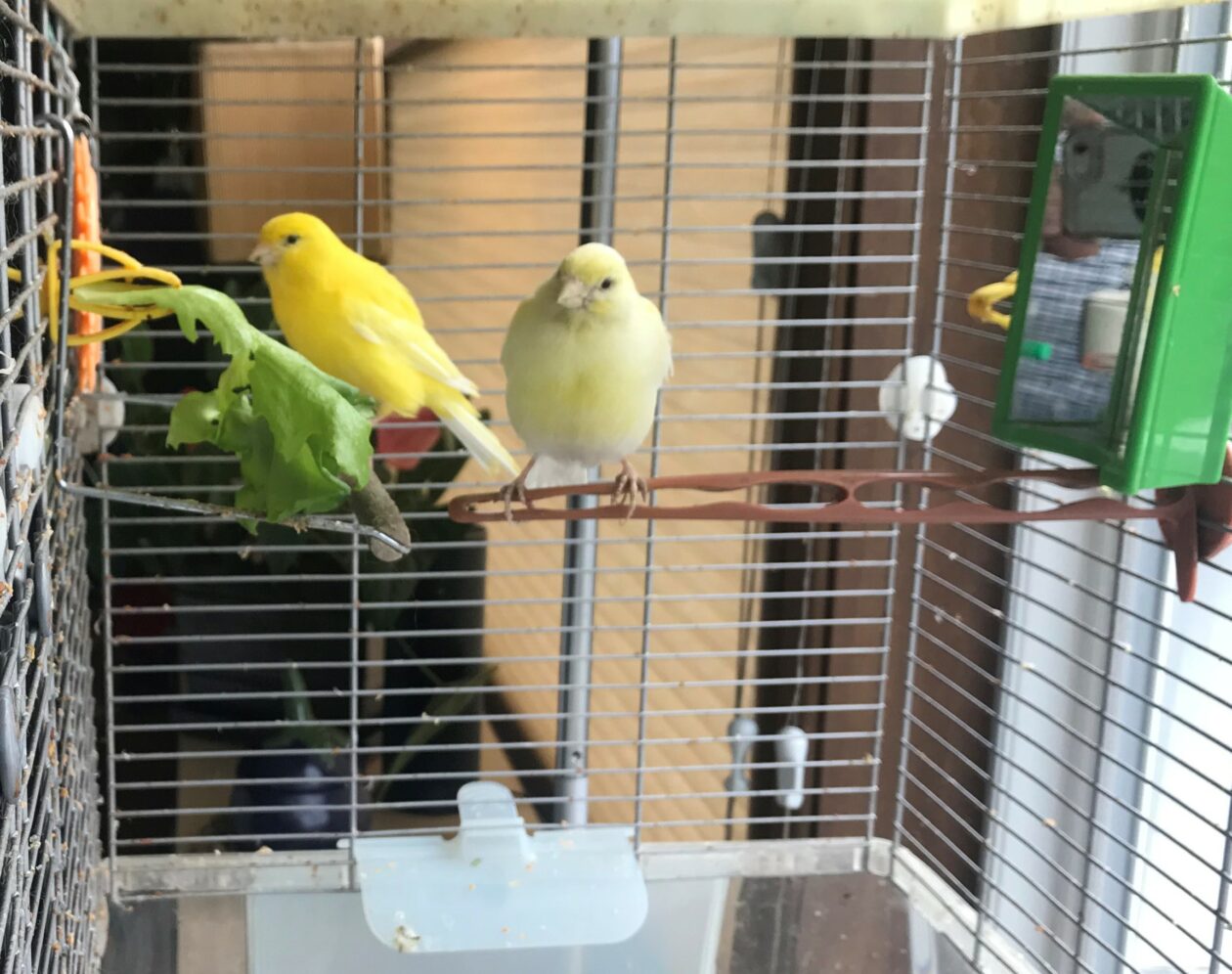 Infarm was founded in Germany back in 2013 by a trio of entrepreneurs, and has since spread out to supermarkets across Europe. Among its partners are retail heavyweights including Amazon Fresh in Germany, Marks & Spencer in Britain, and Metro in France. In June, Infarm announced a $100 million funding round led by London VC Atomico.

The company is one of several ventures aiming to capitalize on vertical farming, with varying degrees of success. One such startup, Plenty, has attracted funding from Amazon CEO Jeff Bezos and other high-profile techies — but announced earlier this month that it was putting its plans to build a 100,000-square-foot indoor farm in the Seattle area on hold.

About a year ago, QFC executive Suzy Monford came across Infarm during a visit to Europe. She sold her colleagues at Kroger, the grocery chain’s parent company, on the idea of forming the first U.S. partnership. Infarm’s cabinets are due to start popping up at about a dozen more QFC stores after the holidays — and could put down roots with Kroger’s other divisions as well.

The value proposition focuses on getting fresh produce — including salad staples such as lettuce and kale as well as basil, cilantro, dill, mint and parsley — to customers who rarely get out of the city or down to the farmer’s market.

“We are hoping to shorten the distance between where food is produced and where it’s consumed,” Evita said. “In 2050, there’ll be 7 billion people living in cities, and we want to do what we can to help feed these people in a sustainable way. What you see here is the beginning.”

He offered me a snippet of the just-harvested cilantro with gloved hands. After rolling the leaf to release its aroma, I chewed the sample — and was reminded of the fresh leaves of clover and lamb’s quarters that I munched on when I was a farmboy in Iowa. It was enough to make me believe Infarm’s claim that conventionally grown greens lose 45% of their nutrients by the time they arrive at the supermarket.

But don’t just take my word for it: Christiane Leibrandt, a German-born transplant to Kirkland, was the first shopper to sample the basil and give a review. “Really delicious,” she said. “I love basil and use it a lot. The flavor is really rich.”

Freshness comes at a premium: Infarm’s lettuce sells for $2.99, compared with the $1.99 price for a head of organic leaf lettuce on the next aisle over. But that $2.99 compares more favorably with the price charged for other brands of living, hydroponically grown butter lettuce.

The acid test came when I brought a head of Infarm’s caravel lettuce home and pulled off a leaf for our canaries. The birds love the lettuce we grow in the back garden, but they’re not so crazy about store-bought stuff.

For what it’s worth, the leaf was pecked down to the stem in a half-hour.