Managing a fast-growing startup is not easy. But the GeekWire Awards finalists for Startup CEO of the Year have figured how to not only lead early stage companies but also inspire others to join them on their mission.

We’ve opened voting in 11 GeekWire Awards categories, and community votes will be factored in with feedback from more than 30 judges. On May 2 we will announce the winners live on stage at the GeekWire Awards — presented by Wave Business — in front of more than 800 geeks at the Museum of Pop Culture in Seattle. Community voting ends April 19. 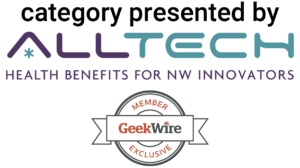 To qualify for this category, eligible CEOs must have 200 employees or fewer. You can see the nominees for the other CEO of the Year category, for big tech companies, here.

Learn more below about what makes the finalists for Startup CEO of the Year special, and vote on all the categories while you’re here. And don’t forget to grab your tickets, as the GeekWire Awards sell out every year.

In her short time as CEO of Jargon, Milkana Brace has demonstrated a crucial skill for any entrepreneur: the ability to adapt.

Brace, a former senior director at Expedia and Groupon, originally helped start Jargon in late 2017 as an on-demand interpretation service. But after joining the Alexa Accelerator in Seattle last year and getting feedback from mentors, the company switched gears and started building a localization product for voice apps.

Jargon made another slight pivot in recent months and is now focusing on developing a voice content management service. The company’s latest iteration helped attract a $1.8 million seed round last month from investors including Amazon’s Alexa Fund.

Here’s a comment from one of our GeekWire Awards judges about Brace:

“Milkana Brace is both brilliant and humble, and this combination, combined with her unwavering commitment to delivering value to her customer, enabled her to lead and execute a massive pivot during the Techstars program that has positioned Jargon for success today. As a multilingual founder, her vision and leadership is helping drive culturally-competent global communication through multi-sense technology.”

Based on her years of work both inside the lab and in the boardroom, Leen Kawas is wholly committed to developing therapies that can help slow and stop the course of neurological diseases.

The foundation of Athira Pharma, previously known as M3 Biotechnology, began while Kawas was earning her Ph.D. in molecular pharmacology at Washington State University nearly a decade ago. The Seattle company, which announced its name change today, uses technology that Kawas developed at WSU and has raised more than $20 million.

Athira is developing its lead therapeutic candidate, NDX-1017, a drug that could halt or reverse the nerve damage that causes Alzheimer’s disease and other illnesses including Parkinson’s and ALS or Lou Gehrig’s Disease. It uses regenerative technology, rebuilding connections between neurons and increasing the mass of the brain and brain health. NDX-1017 is currently in Phase 1 clinical trials, with Phase 2 set to begin later this year.

Kawas serves on multiple science and Alzheimer’s-related boards and holds a doctor of pharmacy degree from the University of Jordan. Here’s a comment from one of our GeekWire Awards judges about Kawas:

“Leen Kawas is a dedicated CEO who takes finding a therapy for neurodegenerative diseases such as Alzheimer’s and Parkinson’s very seriously. She is a champion for patient advocacy, promoting biotech in our region, and creating a work culture full of collaboration and innovation.”

The CEO of Seattle-based virtual reality startup Pixvana likes to “build things that don’t yet have antecedents.” “I’m particularly good at 1.0 stuff: creating the vision, getting other people on board, pivoting aggressively and often… and always driving to outcomes,” Key writes on his LinkedIn bio.

The entrepreneur already had one big startup success. After stints at Lucasfilm, Adobe, and Microsoft, in 2009 he launched buuteeq, a software startup for the hotel industry. The company raised $17 million in capital and grew to 150 employees and 10,000 customers before it was acquired by travel giant Priceline in 2014.

Now Key is back on the startup horse as the leader of Pixvana, which launched in 2015 and has raised $20 million from investors including Vulcan Capital, Raine Ventures, Microsoft Ventures, Cisco Investments, Hearst Ventures, and Madrona Venture Group. The company sells end-to-end cloud-based VR storytelling software and now also develops VR experiences.

Here’s a comment from one of our GeekWire Awards judges about Key:

Whether it’s building an online humor website or scaling an advertising exchange platform, Scott Moore is a proven leader.

Moore is founder and CEO of Ad Lightning, a Seattle startup that helps online publishers and advertising exchanges spot programmatic ads that slow down sites and disrupt engagement.

Ad Lightning spun out of Seattle-based startup studio Pioneer Square Labs in 2017 and has raised nearly $5 million from investors such as Sinclair Digital Ventures, an investment division of Sinclair Broadcast Group; Seattle Angel Fund, Flying Fish Partners; Curious Capital; and The Alliance of Angels. Total funding in the company is $4.8 million. The startup was also part of the inaugural class of Verizon Ventures’ “Media Tech Venture Studio.”

Prior to Ad Lightning and Cheezburger, Moore was general manager of Microsoft’s MSN consumer portal and head of media at Yahoo. Here’s a comment from one of our GeekWire Awards judges about Moore:

“Scott Moore is someone you just want to be around. His good nature, coupled with fierce tenacity, pair tremendously to make him an outstanding CEO. He leads with integrity and fairness, no matter the situation — and he’s seen quite the spectrum over the years.”

Functionally, Armoire is a women’s clothing rental service. But a conversation with Ambika Singh may convince you that her startup is really about girl power (or more precisely, busy professional woman power, but that’s less catchy).

Singh is CEO and co-founder of Armoire, a Seattle startup that uses data-driven curation to change how women buy clothes. Starting at $149 per month, the 3-year-old company ships designer clothes to customers who can swap out the items at any time or purchase them at a discounted rate.

Singh helped launch the company while at MIT’s Delta V accelerator program and has since grown Armoire to more than 30 employees while raising $4.2 million from investors such as Zulily co-founder Darrell Cavens; Foot Locker exec Vijay Talwar; and a number of female backers who decided to invest after first becoming customers.

Here’s a comment from one of our GeekWire Awards judges about Singh:

“Ambika Singh’s entrepreneurial journey is a source of constant inspiration … Most inspiring is that she lives her values, creating the sizeless, endless, closet-of-the-future for women, while hiring a team of primarily women (engineers, designers, stylists and machine learning experts), and exuding the very confidence she inspires in her clientele.”