REPORTING FROM OAKLAND: It was a regular break in the action during the first quarter of Tuesday’s NBA playoff game at Oracle Arena when a familiar voice — at least here in Silicon Valley — echoed through the building.

“Hey Google, turn down the lights.”

Google’s popular voice assistant helped set the mood as the dance team took the floor for a quick performance before the postseason battle resumed.

Such was the scene during Game 1 of the Western Conference Finals as Google, with its massive headquarters located just south of here, spent big dollars on a unique sponsorship with the hometown Golden State Warriors.

The deal is part of a growing convergence of tech and pro sports in the Bay Area — and offered a potential glimpse of what’s to come in Seattle. 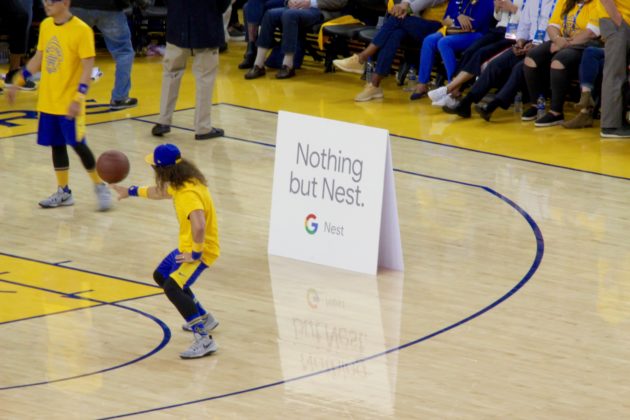 But the most impactful moment came after the game, when all 19,596 fans in attendance walked away with a free Google Home Mini device. At $1 million, it was hailed as “the largest and most valuable giveaway of a Google product at a live sporting event in history.” Fans were able to enter a sweepstakes for free tickets by activating their device at home after the game.

Google has dabbled in sports but this was the first Nest-related sports deal (Nest recently rebranded to Google Nest, the company’s new smart home arm). It was also the first tech giveaway for both Google and the Warriors.

Hey Bay Area, were you at the Warriors game tonight? Check out the moment the entire arena found out they were going home with more than a win …. but also a free Google Home Mini. pic.twitter.com/TzV2Qqjbhe

It’s the latest example of tech and sports feeding off each other, particularly in Silicon Valley, where wealthy companies, executives, and investors have increasingly grown close to the dominant local NBA team over the past decade.

Mike Kitts, vice president of partnerships for the Warriors, said he’s seen activity between tech companies and the team significantly increase since he joined the franchise in 2012.

“We’ve hit a tipping point where both industries are in a position to actually accept each other,” Kitts said, speaking to GeekWire at Oracle Arena before Game 1. “For us, we pride ourselves on being the tip of that spear. From ownership on down, we created a culture and mindset that allows us to partner in a very authentic and meaningful way. That’s what tech companies are looking for.”

Added Kitts: “Our organization takes on the culture and mindset of the Valley.”

Kate Whittington, partner marketing manager at Google, said her company “really supports the Bay Area” and saw the sponsorship as a contextual way to raise awareness about Google Nest and the accompanying smart home devices.

“We’re both really forward-thinking, innovative organizations,” she said. “To be able to come together and really push each other’s limits on what we can do is super exciting.”

Tech runs deep throughout the Warriors far beyond company logos such as Google or Rakuten, the Japanese tech giant that paid $60 million to sponsor the team’s jerseys for three years.

Warriors majority owner Joe Lacob is a longtime venture capitalist with famed Silicon Valley firm Kleiner Perkins. The players are also into it. The region’s tech clout was one reason why star forward Kevin Durant wanted to play for the team. Veteran swingman Andre Iguodala is one of the NBA’s savviest investors, while Curry is also involved. They show up at local tech events and invest in nearby startups such as Lime.

Jonas Jerebko, a power forward who signed with the team last year, is the first active NBA player to own an esports organization.

“Tech is where it’s at,” Jerebko told GeekWire on Tuesday in the locker room. “Esports is a big part of it — it’s always evolving, always new things and new games. The kids love it. It’s very competitive. I like it.”

Players and tech execs are often seen mingling outside the locker room after games.

“The tech companies get access to the Warriors’ glamour, investment money and thoughtful approach to wading into this world,” wrote The Athletic’s Tim Kawakami. “The Warriors players get access to some of the smartest, most creative and aggressive business people in the world.”

The Warriors will move to a brand new billion-dollar Chase Center next season that will boast the latest technology thanks to partners such as Google and Accenture. It will rival Levi’s Stadium, home of the nearby San Francisco 49ers, one of the most high-tech stadiums in the NFL.

Up in the Pacific Northwest, pro sports franchise owners certainly have tech ties. The late Microsoft co-founder Paul Allen owned the Trail Blazers — his sister Jody Allen, who has taken over ownership, was at Game 1 in Oakland on Wednesday — in addition to NFL’s Seattle Seahawks and the Seattle Sounders soccer club. Nintendo held a majority stake in the Seattle Mariners before selling in 2016; current owner John Stanton is a former wireless industry pioneer. Merritt Paulson helped launch HBO’s first subscription video on-demand service before running the Portland Timbers and Portland Thorns.

And though T-Mobile inked a 25-year naming rights deal with the Mariners and Microsoft was once the jersey sponsor for the Sounders, Storm, and Reign teams, there isn’t quite the same level of top-down activity between Seattle’s sports franchises and the local tech scene.

But that could soon change.

Seattle is getting an NHL franchise and a glitzy new high-tech arena in 2021. Tech executives from companies based in the region have been attending private VIP events for potential season ticket holders. Could that team, which is partly owned by Amazon Web Services CEO Andy Jassy, help replicate what’s going on in the Bay Area?

If Amazon wants to get further into sports — the company is investing heavily in sports streaming rights — then the new NHL team would provide an opportunity. The new arena, located blocks from Amazon’s sprawling urban campus, could benefit its interest in live sports and music as a potential test-bed of sorts for new services and products.

“As part of the ownership team, we are hopeful that a lot of companies in Seattle and Washington will be interested in being apart of building the hockey community here,” Jassy told GeekWire last year, adding that he hopes Amazon will be included in that.

Tim Leiweke, the sports and entertainment vet who is leading Seattle’s NHL franchise,  told GeekWire in 2017 that he met with Amazon about potentially integrating something similar to the checkout-less Amazon Go concept at a renovated Key Arena.

“We have an enormous opportunity to shape a new technology experience for our fans and our hockey operations,” Humphrey said in February.

And if and when the NBA ever returns to Seattle — that may be awhile — it could provide another nexus of pro sports and the tech world. Much like how courtside seats at Warriors games are filled with tech luminaries, perhaps local titans such as Satya Nadella or Jeff Bezos will show up on the sidelines (though Nadella would be more likely to show up if Seattle has a pro cricket squad).

A company such as Amazon or Microsoft could try to partner with sports teams outside of the region, but there is something to be said about geographical proximity. I asked Kitts, the Warriors exec, if the team would be open to giving away Amazon Echo devices at a game in the near future. The answer was a quick “no.”

“Not only with Google, but we also have a tremendous partnership with Rakuten,” Kitts said. “We are aligned with both of them. That doesn’t really bode well for Amazon.”