Amazon’s massive Seattle campus is on pace to exceed 13 million square feet over the next few years. But that huge footprint, the forest of office buildings that has transformed Seattle and given it the title of the “crane capital of America,” represents just a small fraction of Amazon’s overall real estate holdings.

In its annual 10-K filing with the U.S. Securities and Exchange Commission last week, Amazon listed its global real estate footprint at the end of 2018 at an astounding 288 million square feet of offices, warehouses, retail stores and data centers. At that size, Amazon could fill every office building in Seattle more than four times over.

The numbers show that Amazon still has plenty of room to grow internationally as more than two-thirds of its footprint is in North America.

Amazon has added the majority of its huge footprint in just the last few years. As noted by The Atlantic, Amazon in 2017 added more square footage — 74 million — than it had in its entire portfolio just five years earlier, in 2012 — 73 million.

From 2016 to 2018, Amazon built out more square footage than it had in its entire prior history, per The Atlantic.

Over that same time period, Amazon has drastically escalated its growth as a company. Amazon’s headcount increased 164 percent from the start of 2016 to the end of 2018 — from an already humongous 245,200 people to 647,500 people. 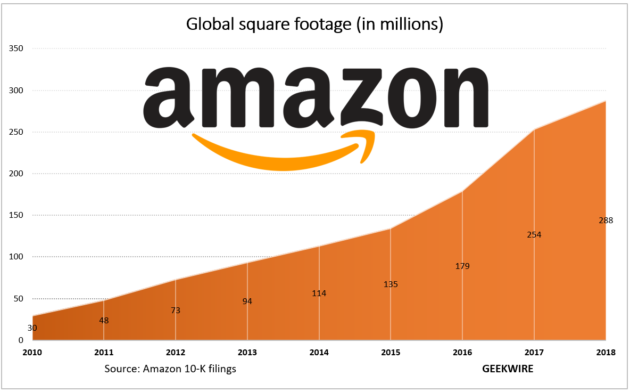 Amazon has come into some serious square footage in recent years, thanks to the blockbuster acquisition of Whole Foods Market. But the company’s physical stores don’t account for the massive spike in building, totaling close to 20 million square feet, less than 10 percent of Amazon’s footprint.

The biggest driver of Amazon’s massive footprint is its ever-expanding fulfillment center network. Amazon doesn’t specifically break out its warehouse presence, grouping it with data centers. But subtracting the square footage attributed to Amazon Web Services leaves approximately 212 million square feet for warehouses and “other,” or roughly 75 percent of Amazon’s overall footprint.

As Amazon’s distribution network has grown, so too has its shipping costs. Amazon spent $27.7 billion on shipping in 2018, an increase of $6 billion or roughly 27.6 percent over the prior year, according to GeekWire research. Amazon spent more on shipping alone last year than Starbucks, another Seattle mainstay, reported in revenue for all of 2018.

Amazon’s growing warehouse footprint and rising shipping costs reflect its push to get products to customers at a faster and faster clip, along with the increasing popularity of Amazon Prime and its core benefit of free two-day shipping. Last April, Amazon disclosed that it had 100 million Prime subscribers worldwide, revealing its membership base for the first time.

On a call with investors, Amazon CFO Brian Olsavsky said the company grew its distribution and shipping square footage by roughly 30 percent in 2016 and 2017. That growth slowed in 2018, but it could pick up again this year.

“So in a lot of ways, 2018 was about banking the efficiencies of investments in people, warehouses, infrastructure that we had put in place in 2016 and ’17,” Olsavsky said. “So while we’ll continue to concurrently drive growth and customer offering and Prime benefits, we certainly do take costs seriously and we will continue to work on operational efficiencies. I would expect these investments to increase relative to 2018.”