Google is still king of search ad revenue but Amazon is coming for the throne.

That’s according to a new analysis by eMarketer, which predicts Amazon’s share of search ad revenue will grow over the next two years as Google’s drops.

eMarketer expects the overall market for search advertising in the U.S. to grow by nearly 18 percent this year to $55.17 billion. Google will have a 73 percent market share by year’s end, according to the analysis. By 2021, eMarketer predicts that Google’s share will drop to 70.5 percent of the market. 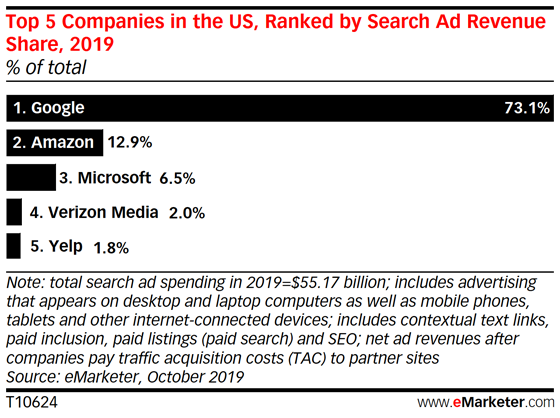 At an estimated 12.9 percent, Amazon’s market share for 2019 will be much smaller than Google’s. Amazon’s ad business is growing at a faster rate, however, according to eMarketer. The analysts expect Amazon’s search business to grow 30 percent over last year. By 2021, eMarketer predicts Amazon will have 15.9 percent of the search advertising market.

“Polling suggests that most product searches now begin on Amazon, causing the No. 2 search player to grow rapidly and steal share from its larger rival (though it is much smaller in comparison),” eMarketer said in the report.

Without much fanfare, Amazon has built a multi-billion dollar advertising business. Companies can purchase ads on Amazon properties to promote their products. Amazon has been beefing up its ad offerings, which can flag items just as a customer is about to buy a competing product. While Google surfaces ads in search results, Amazon shows them on its e-commerce platform. Amazon can leverage the data it has on purchasing habits to create a sophisticated advertising product.

Amazon’s ad business has attracted massive increases in spending because advertisers can reach consumers during product queries, a time when they’re ready to buy.

“Amazon’s ad business has attracted massive increases in spending because advertisers can reach consumers during product queries, a time when they’re ready to buy,” said eMarketer principal analyst Nicole Perrin in a statement. “Amazon has also rolled out better measurement and targeting tools, making it even more attractive for advertisers.”

Amazon hosted an invite-only advertising conference in Seattle earlier this month to educate companies on how to market their products on the e-commerce platform.

Many startups have emerged around helping marketers navigate Amazon’s advertising platform, including several in the Seattle region such as InsightLeap, Downstream, Gradient, and Stackline.

Amazon doesn’t break out advertising individually in its financial results. Instead, advertising is reported under a larger umbrella of “other.” That group brought in more than $10 billion in revenue in 2018 and saw a 37 percent annual jump in revenue in the most recent quarter.

Some observers believe Amazon’s advertising prospects will someday overtake Amazon Web Services as the company’s main profit engine. Piper Jaffray predicted more than a year ago that it could happen as soon as 2021.