Amazon is on track to displace Microsoft in U.S. advertising revenues this year, joining Google and Facebook as one of the top three digital ad publishers.

That’s the conclusion of the latest forecast from eMarketer. The marketing research firm now expects Amazon will generate $4.61 billion in U.S. ad revenues in 2018, up from eMarketer’s March forecast of $2.89 billion. That would give Amazon 4.15 percent of the ad market, slightly edging out the combination of Microsoft and LinkedIn, which would have 4.05 percent. 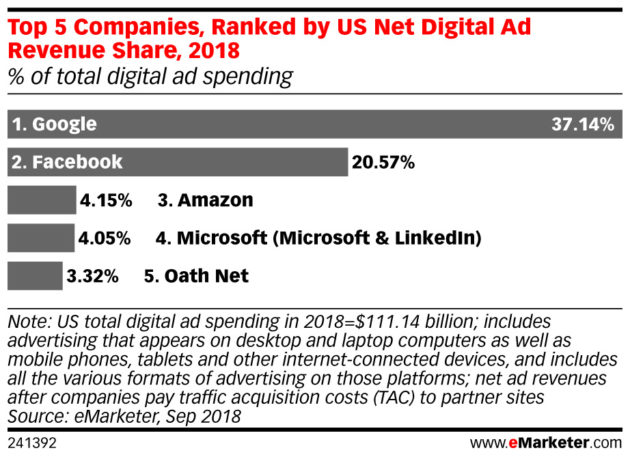 While the forecast puts Amazon in the top three, it’s a distant third. The report estimates Google’s ad revenue share for the year at 37.14 percent and Facebook’s at 20.57 percent. The fifth rank goes to Oath Net, at 3.32 percent.

EMarketer credits strong organic growth in Amazon’s ad revenues, along with accounting changes that now classify some ad services as revenues. Earlier, eMarketer said they had been classified as cost of sales.

“Its strong handle on consumer purchase behavior sets it apart from Google and Facebook in the digital ad market, which has made the company an attractive option for advertisers,” said Monica Peart, senior director of forecasting in a commentary that accompanied the new report.

Another likely reason for the Seattle-based company’s jump: more consumers start product searches on Amazon instead of Google. “That increased search traffic gives third-party sellers a reason to increase bids for keywords on Amazon,” Peart said. 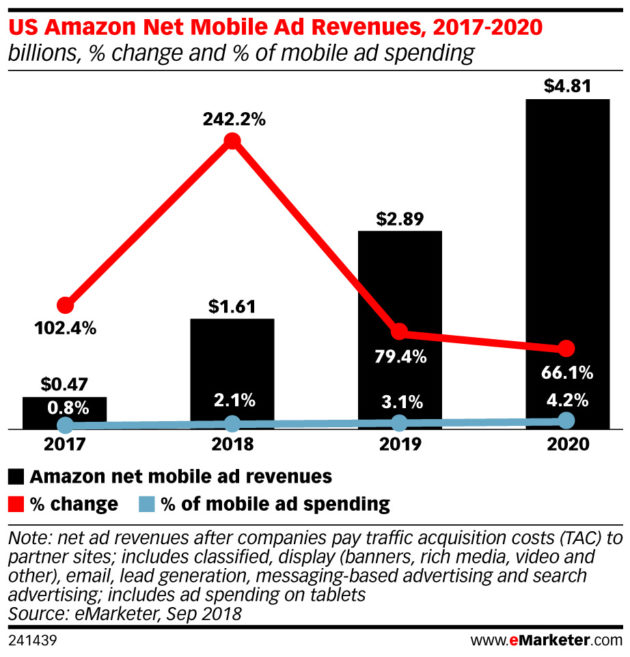 When it comes to mobile, eMarketer has also increased its Amazon projections. It now expects a 242 percent hike over 2017 in Amazon’s mobile ad revenues, reaching $1.61 billion.

Amazon’s overall ad revenue increase isn’t likely to level off soon. EMarketer forecasts increases of more than 50 percent per year through at least 2020, with a 7 percent share of all US digital ad revenue by then.

In July, Amazon Chief Financial Officer Brian Olsavsky called out the growth of advertising as a driver of the company’s “strong” second quarter. “It’s now a multibillion-dollar business for us,” Olsavsky said on a call with analysts. “We’re seeing strong adoption across a number of fronts.”

One of Amazon’s main competitive advantages in ad sales is its data on customer purchasing habits, which appeals to vendors, authors, and other advertisers. “We think we are uniquely positioned to show them the direct benefit of their advertising,” Olsavsky said.