A record number of Amazon-branded trucks are driving up and down freeways across the U.S. this holiday season, the latest sign of the major expansion of the tech giant’s delivery operation.

Responding to an inquiry from GeekWire this week, Amazon said its fleet of tractor-trailers now numbers 20,000, double the amount the company had around this time last year. The expansion comes as Amazon embraces one-day delivery as its new shipping standard for Prime.

GeekWire reporters spotted numerous Prime-branded trailers traveling on Interstate 5 this past weekend. Here’s a photo from Dave Clark, Amazon’s senior vice president of worldwide operations, who tweeted about the trailers on Sunday.

Seeing these out on the road just never gets old. Huge thanks to everyone getting those Black Friday shipments out for delivery and getting ready for a massive Cyber Monday tomorrow! pic.twitter.com/z3d2K1ofXD

The tech giant will invest $1.5 billion in the one-day delivery initiative alone during the holiday quarter, likely pushing total shipping costs for the quarter above $10 billion. The biggest component of the increased costs is transportation, including the expansion of its network of trucks and cargo jets to ship items faster. Amazon offers one-day delivery on more than 10 million items.

Business Insider recently spotted a fleet of Amazon-branded tractors, the vehicles that pull the trailers, an indication that Amazon may bring more of the trucking operation in-house. Amazon has traditionally contracted with third-party drivers and trucking companies, but Business Insider indicates that the tech giant may begin employing its own drivers.

These moves point to an effort to take control of the shipping process to ensure packages arrive at people’s homes in line with Amazon’s increasingly tight deadlines. Observers have long speculated that Amazon will someday cut out large delivery partners including FedEx, as well as UPS and USPS, as those carriers also become competitors. However, Amazon executives have consistently insisted the company will rely on partners and its own operations to continue speeding up delivery.

“We’re focused on making this holiday season more convenient than ever for our customers, especially given how short this holiday shopping season will be,” said Jeff Wilke, Amazon’s CEO of Worldwide Consumer, in a news release. “We are thrilled that customers continue to come to Amazon in record numbers to discover what they need and want for the holidays.” 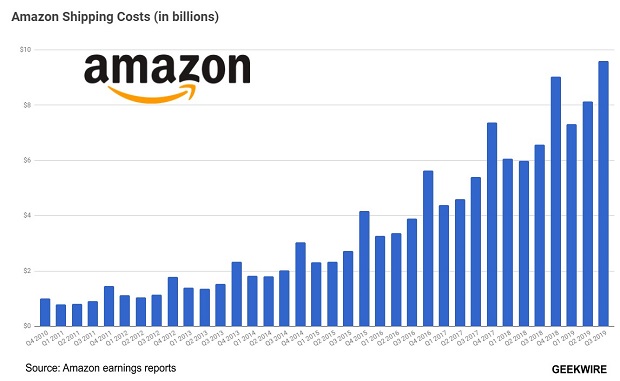 It’s not just Amazon seeing a boost this year. Online shopping on Cyber Monday hit a record $9.4 billion, per Adobe’s analytics arm, a 19 percent bump over last year. This comes on the heels of consumers spending a combined $19 billion during the four-day period from Thanksgiving through the weekend.

Since Nov. 1, consumers have spent more than $81.5 billion on holiday shopping online, up 14 percent over last year’s pace. For the full year, Adobe expects holiday spending to reach $143.8 billion, up from $126 billion last year.

Physical retailers like Target and Walmart are pushing back against Amazon, finding new ways to take advantage of their huge network of stores and blend that with online shopping. Adobe reports that spending on orders made online but picked up in stores this holiday season is up 41 percent year-over-year.

The bulk of increased revenue from online shopping so far this holiday season is going to retailers with more than $1 billion in annual sales — Amazon and its larger rivals. Adobe reports that the biggest retailers have seen a 71 percent bump in online sales during the holiday season, versus a 32 jump for smaller businesses with less than $50 million in annual sales.

Amazon has spent recent weeks bracing for a busy holiday season, doubling the number of seasonal hires up to 200,000. It is also experimenting with using temporary warehouse space near its fulfillment centers to give sellers room to stage their inventory and quickly replenish items that are selling fast.