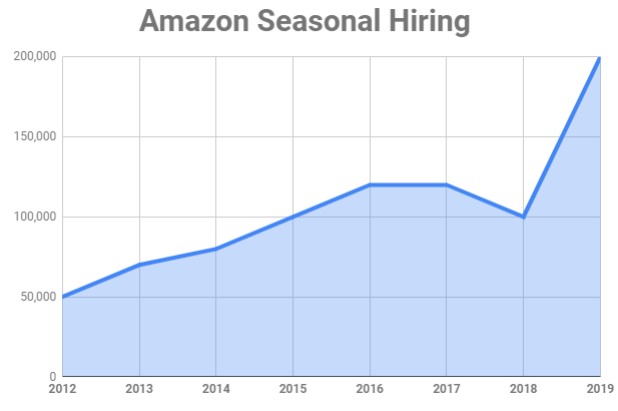 Amazon plans to hire 200,000 seasonal workers this year, twice as many as last year, suggesting that it expects a strong holiday shopping season.

Much of the hiring will take place in fulfillment centers, but the increase also reflects the steady expansion of Amazon’s business into other areas that require seasonal workers.

Amazon last year started hiring delivery drivers as seasonal workers. Its jobs site also shows seasonal openings in its growing number of brick-and-mortar stores. The company’s seasonal hiring is up four-fold since 2012, when it had 50,000 seasonal openings.

News of the seasonal hiring plans comes after Reveal, a project of the Center for Investigative Reporting, reported that serious injuries are much higher at Amazon facilities than national averages. Amazon says its injury numbers are higher because it keeps better records to protect worker safety.

The company employed more than 750,000 people worldwide as of the end of the third quarter, not counting seasonal workers, up more than 96,000 in three months.

Amazon’s seasonal hiring plans were reported by the Associated Press and Bloomberg News, and confirmed by an Amazon spokesperson. The company noted that it has made 19,000 promotions of workers in its operations to manager or supervisor roles this year.

Adobe Analytics says it expects online holiday shopping in the U.S. to surpass $143 billion this year, up more than 14 percent, driven largely by mobile shopping.

Post updated on Thursday morning with additional details from Amazon and Adobe.