Amazon is spending massively to increase capacity for its new one-day delivery initiative — and it’s cutting into the company’s profits.

The company revealed Thursday that it will invest nearly $1.5 billion in the fourth quarter alone for its one-day shipping initiative, which is replacing the traditional 2-day core Amazon Prime membership benefit. That’s nearly double what Amazon spent in the second quarter, when it announced the expansion.

Amazon reported third quarter earnings Thursday; its profits missed analyst expectations for the second straight quarter, with earnings per share coming in at $4.23, down from $5.75 last year.

Amazon’s overall shipping costs have ballooned in recent years as the company aims to speed up delivery, both with products purchased on Amazon.com and via Prime Now, such as Whole Foods orders. During Q3, Amazon spent a whopping $9.6 billion globally on shipping, up 46 percent year-over-year, and $567 million more than what the company spent in the 2018 holiday quarter.

So the big take-away from Amazon earnings today is that delivering things to you in one day instead of two is… pic.twitter.com/xyqt0UShKI

It’s a safe bet that shipping costs will eclipse $10 billion this holiday quarter, adding to what could be more than $35 billion spent on shipping over 2019. The company is also going on a hiring spree — it added nearly 100,000 people last quarter — in large part to support the one-day program.

The increased expenses may be spooking some investors. Amazon shares were down nearly 8 percent following the earnings report. 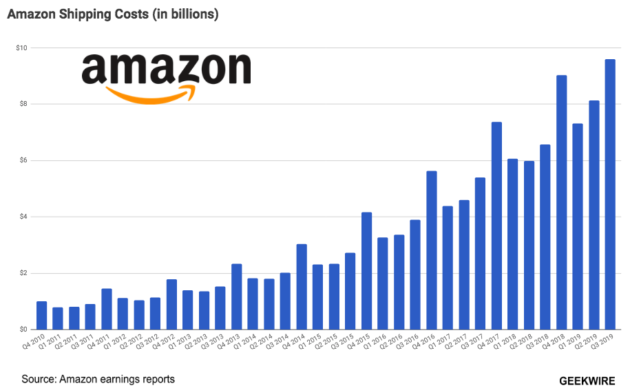 “We are still learning on the one-day costs as we go, about what the long-term cost structure will be,” he said.

Olsavsky said the biggest expense for the one-day initiative is transportation costs. But the company is also spending more to increase both product selection and labor capacity at its fulfilment centers. In addition, there is forgone revenue from previously charging customers fees for same-day or one-day shipping — now that benefit is increasingly becoming free for Prime members on millions of items.

“It’s a drastic change to the whole network topology,” Olsavsky said Thursday. “We’re glad to do it and we’re working through it. We’ve been down this road before in a number of different incarnations in Amazon’s history.”

Amazon doesn’t seem too worried about sacrificing profits and investing heavily now for something it hopes will drive more revenue down the line — a strategy embedded in Amazon’s DNA since it launched more than two decades ago. Amazon for years funneled revenue back into the company, rarely getting in the green, until a recent run of record profits.

In his 1997 shareholder letter, Amazon founder and CEO Jeff Bezos noted that “it’s all about the long term.” Bezos echoed that sentiment today.

“Customers love the transition of Prime from two days to one day — they’ve already ordered billions of items with free one-day delivery this year,” Bezos said in a statement. “It’s a big investment, and it’s the right long-term decision for customers. And although it’s counterintuitive, the fastest delivery speeds generate the least carbon emissions because these products ship from fulfillment centers very close to the customer — it simply becomes impractical to use air or long ground routes.”

Olsavsky added that they’ve seen Prime members increase their orders and spend more already. “They must also see it as a real help to them in their daily lives,” he said of the one-day delivery initiative.

Online sales grew 22 percent to $35 billion in the third quarter — double the growth rate in the year-ago quarter.

Some analysts believe the investment will be a boon to Amazon’s bottom line. Based on increased Prime adoption and increased spend per Prime member household from the one-day offering, RBC Capital Markets analyst Mark Mahaney said in a research note last month that Amazon can generate up to an additional $24 billion in total annual revenue. That’s an increase of about 10 percent, based on the company’s 2018 results.

Charlie O’Shea, an Amazon analyst with Moody’s, added that “we continue with our view that Amazon’s robust liquidity, with over $42 billion in cash and short-term investments, as well as AWS’ steady $2.3+ billion in operating income per quarter, provides the company with significant runway to continue with its myriad, necessary investments.”

Amazon said it had more than 100 million Prime members in April 2018; it has not provided an updated number since then. In addition to fast free shipping, members also get benefits including cloud storage, streaming movies and TV shows, discounts at Whole Foods, and other perks.

Amazon is currently rolling out one-day shipping first in North America and then internationally. The company said in June that free one-day shipping was available to Prime members on more than 10 million products, with no minimum purchase amount.

We’ve been down this road before in a number of different incarnations in Amazon’s history.

Amazon has been expanding its own shipping operations — buying its own airplanes and trailers, for example — to help meet delivery demand from customers. Rumors have persisted that Amazon will someday cut out large delivery partners including FedEx, as well as UPS and USPS, as those carriers also become competitors. In August FedEx said it was ending a ground shipping deal with Amazon.

But Olsavsky reiterated Thursday that “in the long run we’re going to have a combination both of our own capacity, fueled by third party carriers.”

The “last mile” of delivery — getting packages from the closest fulfillment center to a customer’s home — can be particularly costly. To help meet demand, Amazon last year created its own small business program that lets anyone run their own package delivery fleet. The company also uses Amazon Flex, its Uber-like program for deliveries, and smaller third party partners for next-day orders, which was the focus of a BuzzFeed investigation last month.

Amazon’s push for faster shipping has reshaped the retail industry, with many competitors such as Target and Walmart now offering their own free two-day delivery options. Walmart in May unveiled one-day delivery on more than 200,000 items with a minimum order threshold of $35.

But Amazon has an advantage over those competitors, in that it can leverage growing profits from other arms of the business — cloud computing, advertising, etc. — to allow its e-commerce operations to run on thin profit margins.

Just as Amazon forced competitors to offer their own free 2-day shipping promise, RBC thinks history will repeat itself with one-day shipping. The firm in September predicted that “once Amazon builds an even greater loyal user base with free one-day delivery, the industry may have to follow, again.”

That’s in line with what Patrick Moorhead, principal analyst at Moor Insights and Strategy, told GeekWire.

“Amazon is waging a war of attrition to wear out the competition,” Moorhead said. “It’s setting the bar so high knowing competitors will follow and Amazon knows it can do it at lower costs sometime in the future. One day shipping also puts it more into competition with traditional brick and mortar stores. I think time will show it’s worth it.”