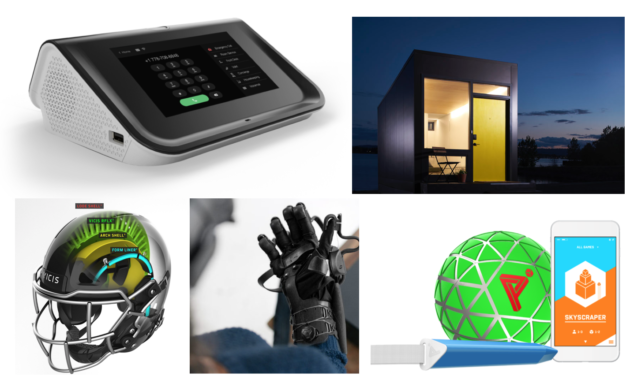 There’s something cool about getting to touch, feel, and use a high-tech hardware product, perhaps more so today than in the years past given how software is eating the world. 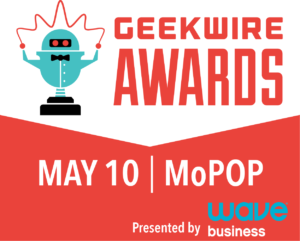 Each of the five finalists in this year’s Hardware/Gadget of the Year category at the GeekWire Awards is unique in their own way, from protecting your head to providing a place to live.

We are in the process of unveiling finalists in 13 GeekWire Awards categories. You can visit the event site to vote in 10 other categories we’ve already announced, including Young Entrepreneur of the Year; Next Tech Titan; Hire of the Year and more.

Winners will be revealed at the GeekWire Awards — presented by Wave Business — on May 10th at the Museum of Pop Culture in Seattle. GeekWire readers nominated companies, people and organizations for the GeekWire Awards earlier this year, with finalists selected by a panel of judges from those community nominations.

Last year’s winner in this category was Moment, the Seattle-based smartphone lens and case maker. Other past winners have included The Microsoft Surface Book, Meld, and Poppy.

Read on to learn more about this year’s finalists and vote below. Be sure to grab tickets for the big Awards show — head here to get yours before we sell out.

Blokable is a Seattle startup founded by a former Amazon manager that aims to cut costs for builders and residents alike through the construction of tech-powered manufactured housing. The company’s modular units are pre-fabricated in a warehouse and trucked to a construction site, where they are craned onto the foundation, connected to utilities, and stacked several stories high. Blokable says it can reduce design time by as much as 70 percent and cut building time in half. “Our mission is to make housing accessible and affordable for everyone, and we think to do that you need to make fundamental change in the process of how we build it,” said co-CEO Aaron Holm. Its investors include Paul Allen’s Vulcan Capital; Jason Calacanis; Borealis Ventures; Urban Us; and Kapor Capital.

Play Impossible is using technology to get people moving while having fun. The Seattle startup sells a smart, connected inflatable ball which links to a smartphone app and lets users play different physical games. The small rubber ball looks completely normal from the outside but has a bevy of electronics inside — accelerator, barometer, microcontroller, ultracapacitor, etc. — and sends real-time data via Bluetooth to the accompanying app. “Our common goal is to transform ordinary play and sporting goods by giving them a brain to introduce a connected generation to the joy of physical play in a digital way,” said CEO Brian Monnin. Investors include Two Sigma Ventures; Ben Franklin Technology Partners; and WestRiver Group, the firm led by Topgolf Entertainment Group Co-Chairman Erik Anderson.

Roxy is a Seattle startup that sells a customizable voice assistant and touchscreen smart speaker for the hotel industry. Its product lets hotel guests do voice calls, order room service, ask for more towels, and other hotel tasks. Roxy works with hotels like Willows Lodge in Woodinville, Wash. and Adante Hotel in San Francisco to add custom commands that are easier for guests and build what the company says are more comprehensive capabilities than other speech-enabled assistants. In November, the five-person company raised a $2.2 million seed round that included investors from the hotel industry, a New York startup studio, a Chinese company, and Cooper Manning, the brother of famed NFL quarterbacks Peyton and Eli Manning. The company is led by Cam Urban, the co-founder of Jellyfish Art and a former program manager with Microsoft Azure; Peng “Michael” Shao, a former leader on the cloud speech team at Amazon; and Le “Grace” Huang, a former web developer at Amazon who worked on projects like Amazon Coins and the Kindle Device Store.

Vicis is on a mission to help make sports safer. The Seattle startup created a football helmet that features a unique outer shell material and flexible interior columns designed to mitigate the forces thought to cause concussions. Players from 18 NFL teams and hundreds of college athletes wore the helmet last season. The ZERO1 helmet was one of Time Magazine’s 25 Best Inventions of 2017 and placed first in the NFL’s recent helmet safety test. Vicis originally spun out of the University of Washington in 2014. The 85-person company has raised $50 million to date from investors like Seahawks quarterback Russell Wilson; prominent spine and neurological surgeons; Cincinnati Reds minority owner Harry Fath; angelMD; W Fund; Alliance of Angels; and Trilogy Equity Partners.

Make sure to get tickets to the GeekWire Awards here.