It wasn’t the most social happy hour, at least not for those of us back in the real world. But as we took turns trying out the Facebook’s new Oculus Go at our Friday afternoon get-together, a consensus emerged among members of the GeekWire team: Finally, this is a virtual reality experience that many of us would actually use.

We used two Oculus Go headsets: one a 32GB device and another 64GB. Afterward, I asked everyone for their impressions, and also polled my family after a few days of using one of the headsets at our house. 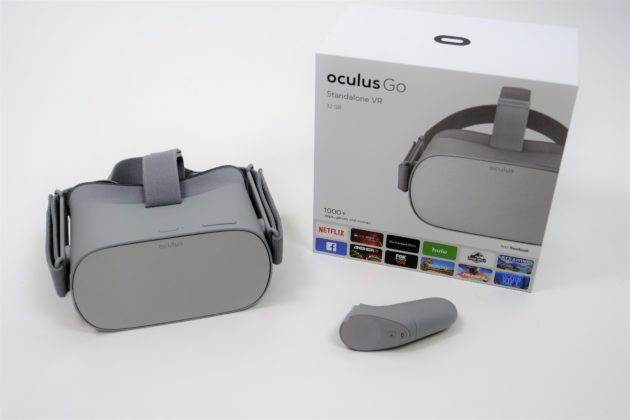 No, it wasn’t a big sample size, but the group did included plenty of VR skeptics, including some who had been turned off and literally nauseated by VR in the past.

Here are the biggest pros of the Oculus Go, based on our collective observations.

And here are the biggest downsides that emerged from our experience.

Even with those downsides, what stood out to me was the immediate enthusiasm from everyone I handed one of the headsets.

Over the years, we’ve tried all sorts of VR headsets in the office, at home and at events, including Oculus Rift and HTC Vive, the Gear VR, PlayStation VR, and Google Cardboard smartphone VR headsets. This is the first time I can recall people just picking it up and immediately understanding how to use it. There’s also a difference when it’s a self-contained device.

With the launch this week of the Oculus Go and the competing $399 Lenovo Mirage Solo, this really does feel like the moment when virtual reality becomes mainstream.

“My first thought was “wow, this could be addictive,” said Stefania Hajnosz, GeekWire’s advertising and membership coordinator. “I didn’t expect an animated world to feel so real. Looking around and moving with the cartoon scenery tricked my mind more than I expected.”

GeekWire reporter Taylor Soper and I connected our Facebook accounts to the devices and tried out Oculus Rooms, which has been updated for the Oculus Go launch. We were able to share Facebook pictures, play games and view content together. We happened to be in the same physical room, but it’s easy to see how friends, family members and others in different locations could use this to hang out, almost like real life. It’s too bad they have to use avatars, but the audio quality was impressive — in many ways more reliable than a Skype call.

“This feels like a big step forward for virtual reality,” Taylor said. “My first Oculus Go experience just felt easy compared to my past VR tests — no smartphone or powerful PC needed; simple set-up; improved controls; lots of apps to pick from; solid hardware; etc. The social aspect also stood out. It was cool being able to talk to my colleague while playing checkers or cracking up at a slideshow of old Facebook photos. One critique is the video quality, which is still quite pixelated. But otherwise I’m more intrigued than ever about the future of VR/AR.”

Nat Levy, another GeekWire reporter with quite a bit of hands-on VR experience, was also impressed — with a few caveats.

“I’ve tried a few different headsets over the years and this one obviously stands out because there are no cords to trip over,” he said afterward. “The app store was a little hard to navigate and it took awhile for apps to install. I appreciated the lightness and fit of the headset. Usually I have a headache after a few minutes wearing one, but that didn’t happen in my initial Oculus Go experience.”

At home, my 7-year-old quickly found the roller-coaster experiences and Netflix app, and she already has declared the latter’s virtual living room superior to our real one. Epic Roller Coasters and the Hidden Fortunes hidden object game are two of our favorites so far. And I have to admit, watching WrestleMania in VR was pretty epic.

Bottom line, we’re optimistic, and looking forward to continuing to use the Oculus Go and other devices in this brave new world of untethered VR. If you’re thinking about getting one, it seems worth the price to us.