Virtual reality has officially arrived, if the convention floor at PAX West is any indication.

VR experiences are seemingly around every corner at the gaming extravaganza, which began today in Seattle. Game developers, chip makers and console giants show new VR titles and try to win the hearts of the tens of thousands of game fans flooding into the event.

Sony PlayStation, Intel and Nvidia are among the companies demonstrating their latest virtual reality technologies at on the main convention floor. A few blocks away, headset makers HTC and Oculus are catering to gamers at a special “VR Village” at the nearby Westin Hotel. 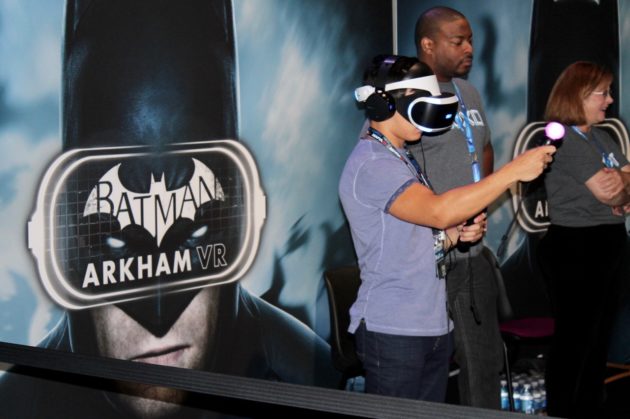 Before the hordes were allowed in, GeekWire got a chance to check out some of the many virtual reality exhibits. While didn’t hit them all, we got a good taste for what is out there.

PlayStation’s VR system, set to be released Oct. 13, was by far the most popular exhibit in the media preview hour. We got a chance to play Rez Infinite, an update of the 2001 music-based rail shooter made originally for Dreamcast and PlayStation 2.

The game required us to shoot down opponents by looking at them to aim and then use a traditional PlayStation controller to fire. The game attacks all senses, with booming music that switches between a variety of genres dictating the rhythm of the game. Rez definitely functions in 360 degrees and the visuals remained crisp even as we whipped our heads around to look for enemies. We managed to take out the big boss, not get sick, and it felt like we just came out of an enjoyable DJ show at the end. 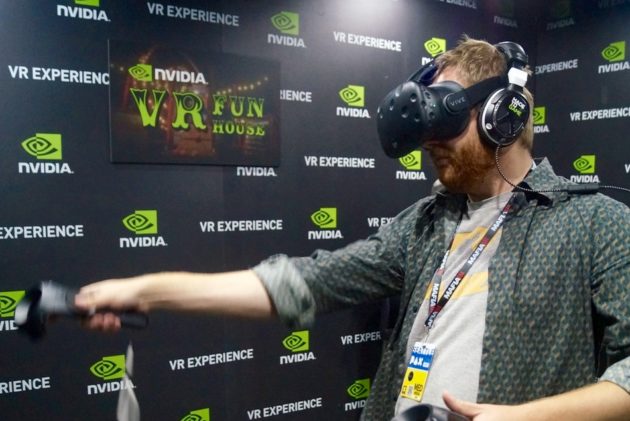 Next up it was off to Nvidia’s VR booth, where we got a look at its VR Funhouse game, which runs on the HTC Vive headset and is currently available on Steam. Using two controllers, we a chance to play a variety of carnival games like whack-a-mole and shooting liquid into a clown’s mouth, though it was more of a green goo, and it happened in a zero-gravity environment.

There were also experiences you definitely can’t get at the fair. Several games give players a pair of guns, and by far the most exciting experience was skeet shooting plates that shot out of a cannon. We also got the chance to chuck baseballs, hammers and soccer balls at fine china, punch maniacal candy corn-like creatures and slice as many colorful balloons as possible with a pair of swords. Not only did we get to handle excess weaponry, It was a nice arm workout too. 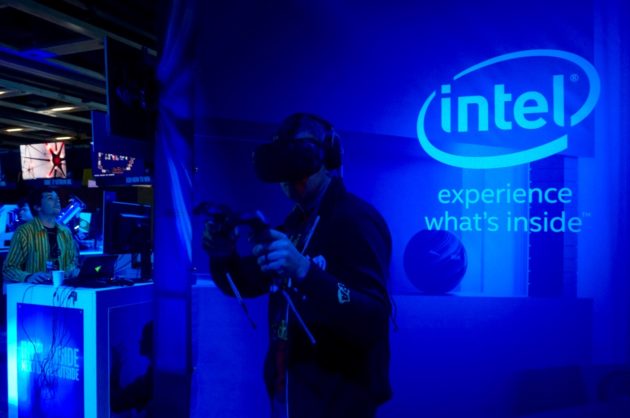 At the Intel booth, the chipmaker used an HTC Vive to show off the power of its Core i7 processors, running the multiplayer sci-fi shooting game Raw Data from Survios Studios at 90 frames per second — making the action extremely realistic and engaging, even if the gamer’s mobility was limited by the tethered headset.

Also during the event, Oculus and Harmonix are showing Rock Band VR to media. About the only thing missing was a Microsoft HoloLens. The company’s mixed reality headset was a no-show at the Xbox booth, but we’ll keep an eye out for it elsewhere at PAX this weekend.