MOJAVE, Calif. — Virgin Galactic’s SpaceShipTwo rocket plane, dubbed VSS Unity, has become the first privately funded vehicle in 14 years to carry people to the edge of space — depending on how you define space.

Over the course of almost an hour, SpaceShipTwo and its White Knight Two mothership rose to a launch altitude of about 43,000 feet. Just before 8 a.m.. PT, the rocket plane was dropped from White Knight Two’s underbelly and lit up its own hybrid rocket motor.

The rocket blasted for 60 seconds, sending Unity upward at supersonic speeds as high as Mach 2.9 and powering test pilots Mark “Forger” Stucky and Rick “CJ” Sturckow to a height of 271,268 feet. That translates to 51.4 miles, or 82.6 kilometers.

The internationally accepted boundary of space is currently 100 kilometers, or 62 miles, although that could soon change. Virgin Galactic favors a boundary of 50 miles, or 80 kilometers, which is the height at which military pilots get their astronaut wings. That’s also the height that’s written into the company’s contracts with customers for future spaceflights.

Thus, today’s flight was a cause for celebration for Virgin Galactic and its sister company, The Spaceship Company, which is building more SpaceShipTwos.

“Welcome to space, Unity!” Enrico Palermo, president of The Spaceship Company, told the crowd watching the flight as SpaceShipTwo passed the 50-mile point.

After Unity glided back down to its landing, Branson made a declaration that he said he had been waiting to make for nearly two decades: “Ladies and gentlemen, boys and girls, space is … Virgin territory!”

“To actually get out there and have that motor shut down, and go, ‘Huh, we’re going to space,’ and see the dark sky … it’s great,” he said.

Sturckow, a former space shuttle astronaut, was also impressed. “It was a great flight, and I can’t wait to do it again,” he said.

Lovely shot of takeoff! WhiteKnightTwo and SpaceShipTwo take to the skies pic.twitter.com/JFcSDVB9jR

The Federal Aviation Administration said both test pilots will get their astronaut wings in a ceremony early next year. Assuming that 50 miles up qualifies as space, today’s flight marked the first time since the space shuttle fleet’s retirement in 2011 that U.S. astronauts flew on a U.S.-made spacecraft launched from U.S. soil

If Unity’s flight crews demonstrate that they can blast past the 50-mile mark repeatedly, reliably and safely in Mojave, that’s sure to open the way for commercial suborbital tours to begin at Spaceport America in New Mexico next year. Virgin Galactic’s team began reviewing data from the test flight almost immediately after landing.

“Ideally, we’d want to do three more flights before we go to New Mexico,” Branson said. “It just depends on the data.”

Branson said he intends to be the first commercial passenger, but more than 600 other “Future Astronauts” have signed up at a price of as much as $250,000 a seat.

Branson said the price would soon go up, but he declined to say by how much. He said he expected the price to come down again once Virgin Galactic gets well into commercial operations.

“Space is not cheap, and I’ve personally invested about a billion dollars in this project,” he told reporters. “Having our first money coming back is a good feeling.” 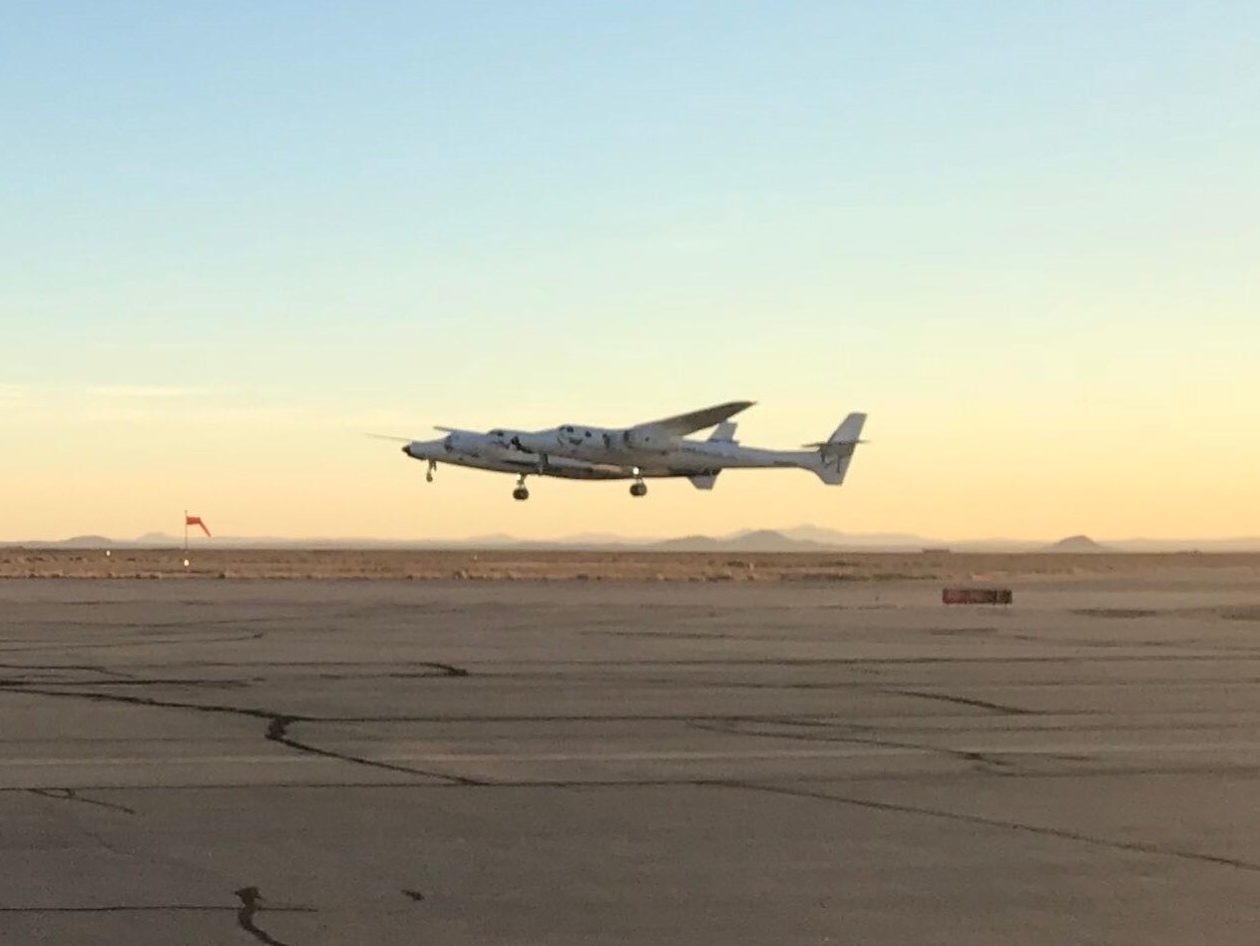 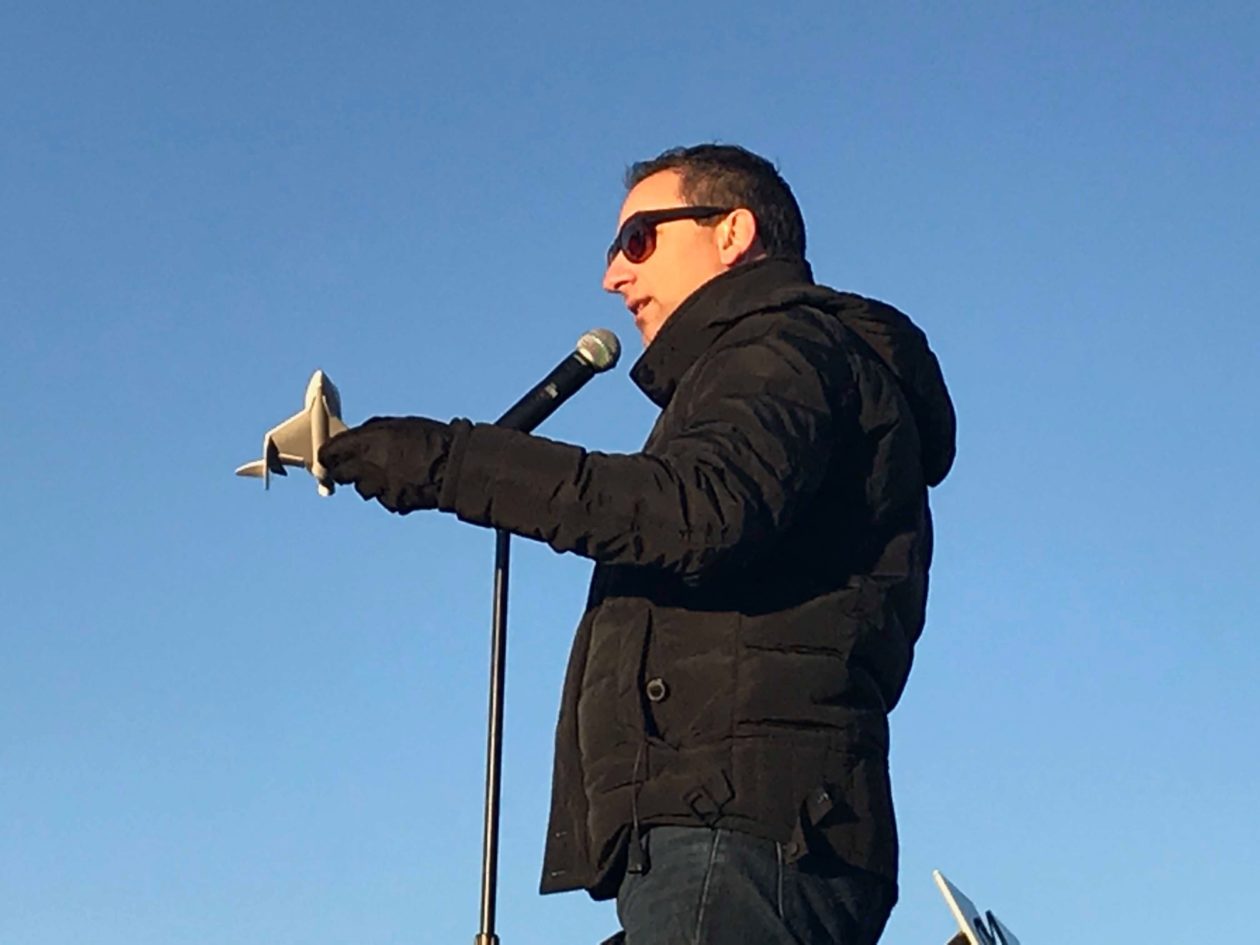 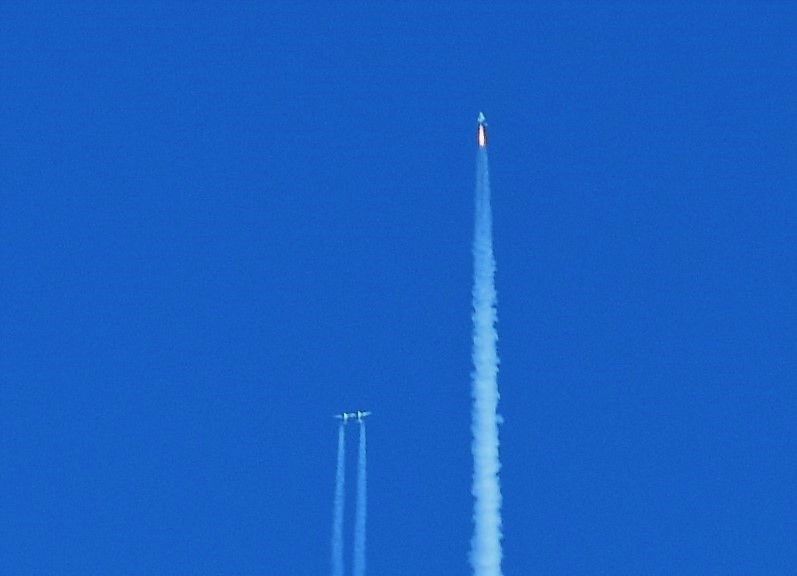 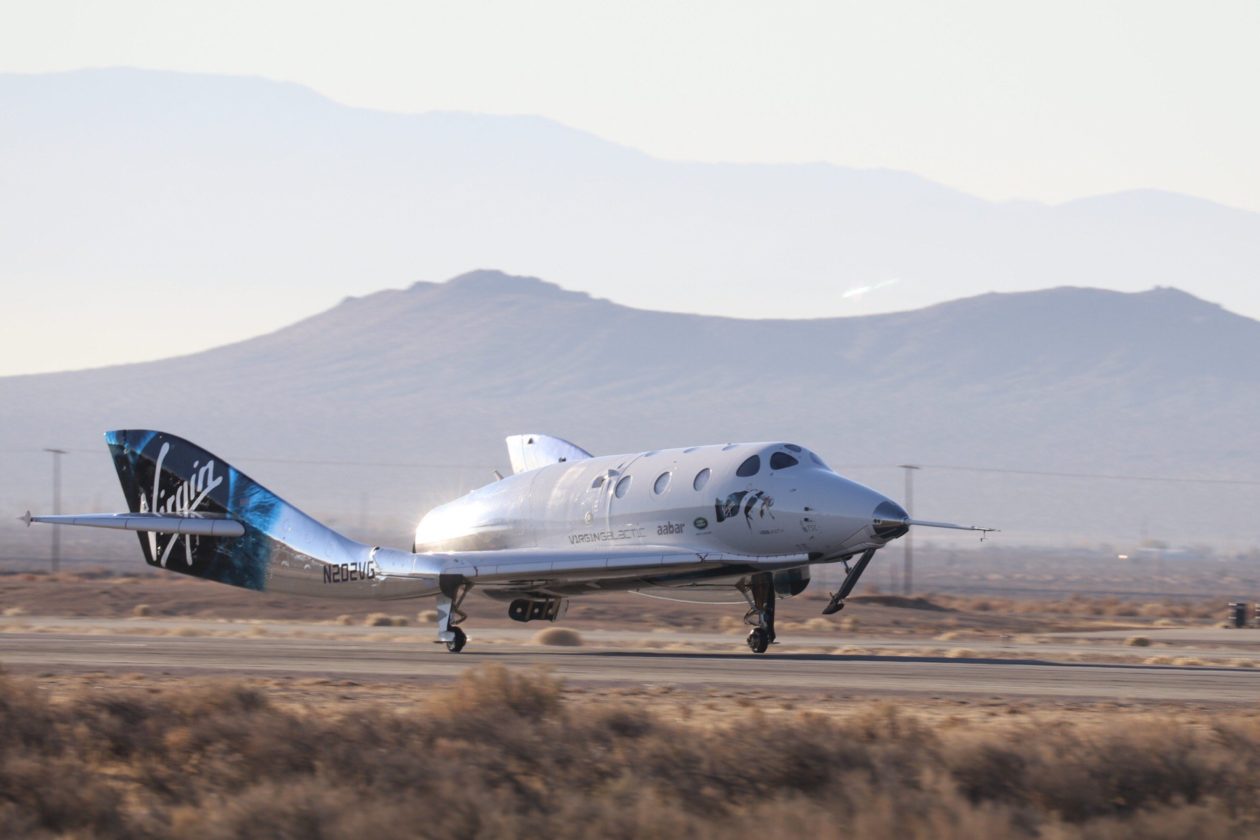 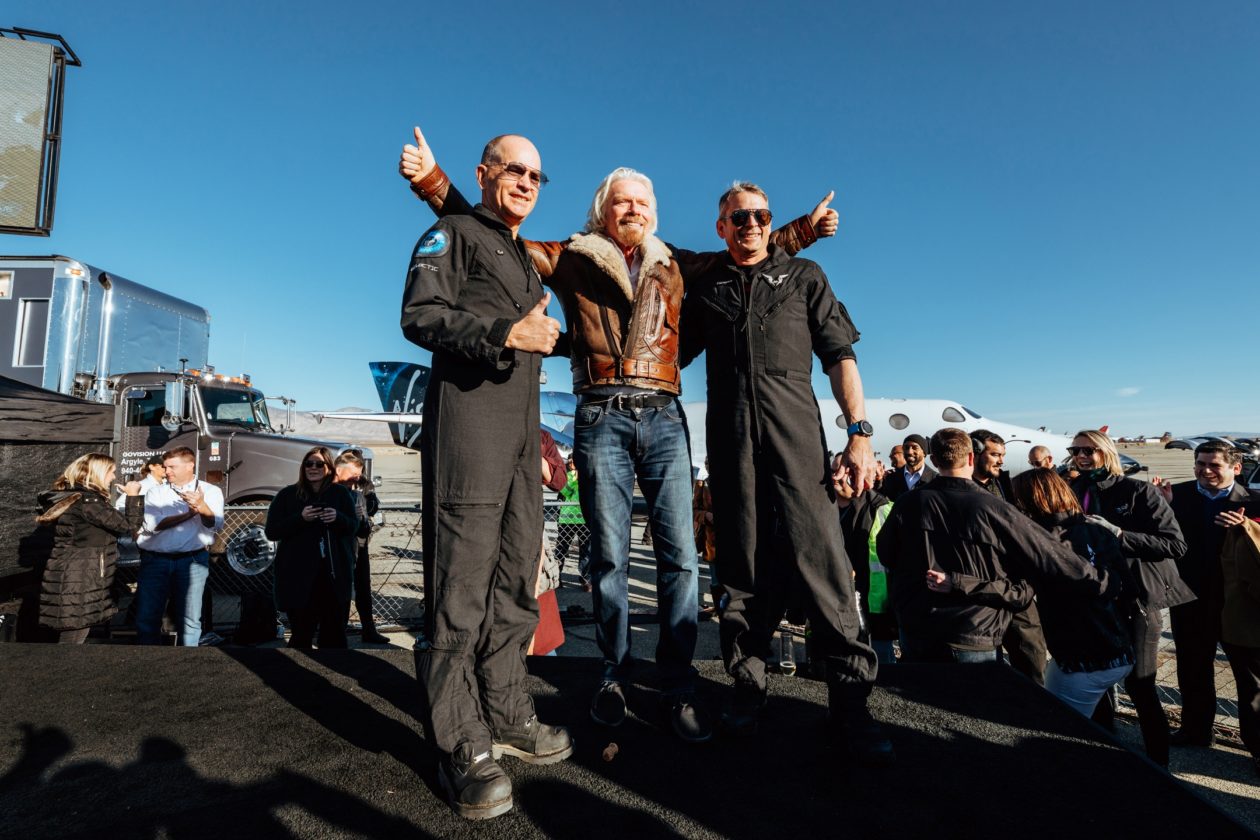 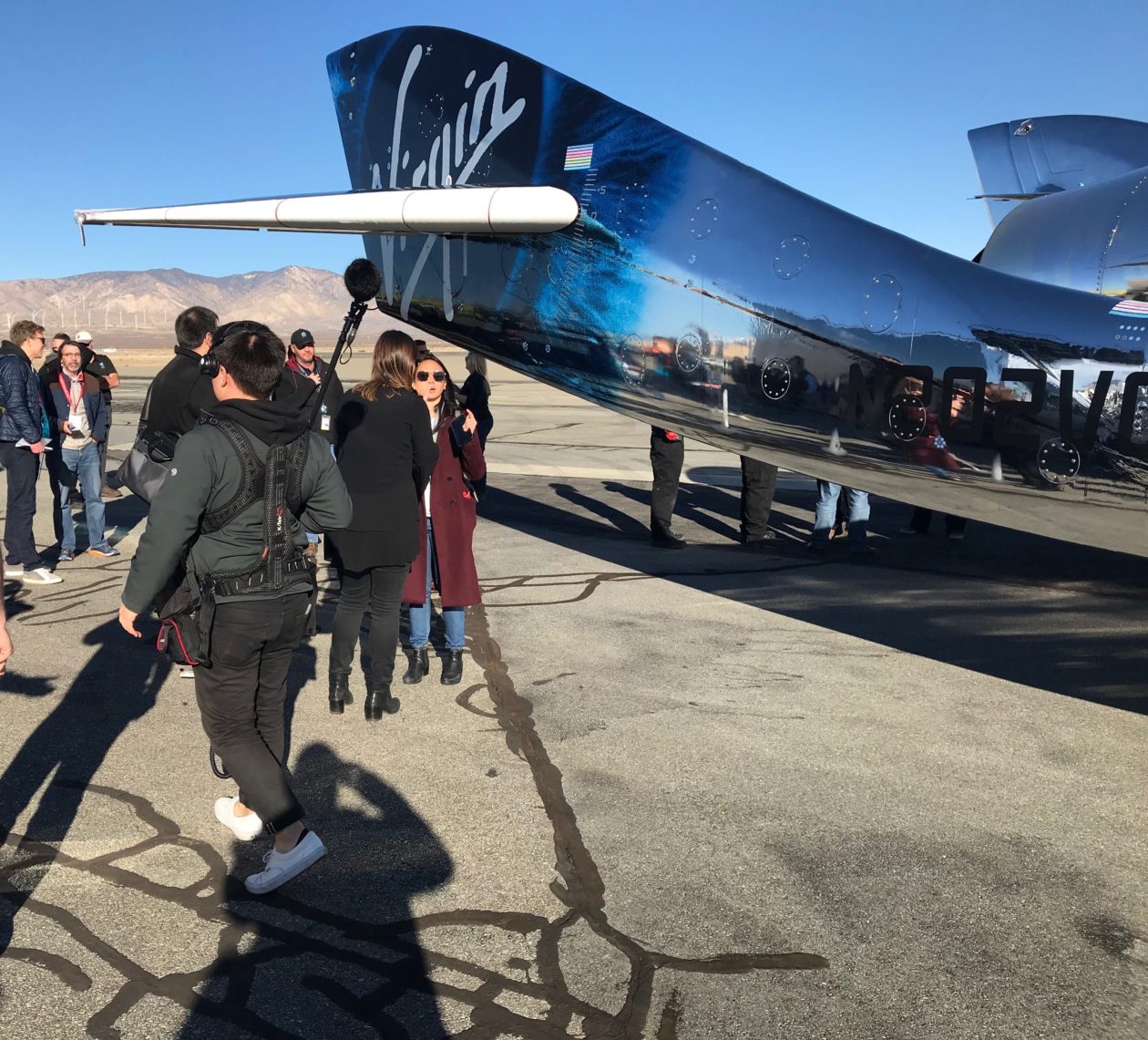 Well-wishers gather around the tail of VSS Unity after its landing. (GeekWire Photo / Alan Boyle) 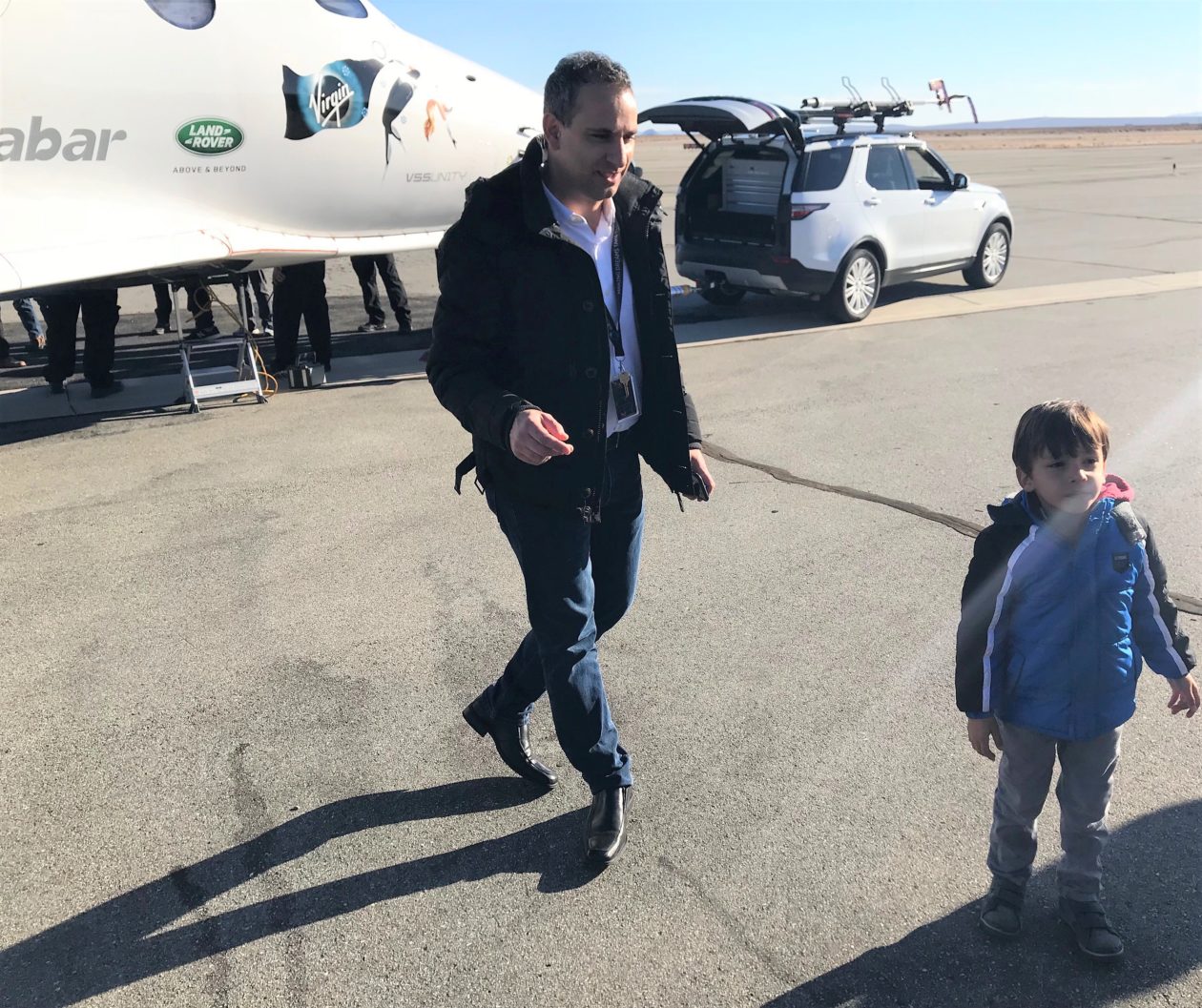 Enrico Palermo, president of The Spaceship Company, chases after his son Alessandro on the runway at California’s Mojave Air and Space Port. (GeekWire Photo / Alan Boyle)

Including investments from other backers, the total for Virgin Galactic, The Spaceship Company and Virgin Orbit amounts to around $1.3 billion, he said. About $250 million more will be required to complete the development and test program, “and then the cash will start coming in quite quickly,” Branson said.

The atmosphere in Mojave is much as it was 14 years ago — when the SpaceShipOne rocket plane, funded by Microsoft co-founder Paul Allen — rose past the 100-kilometer mark three times, winning the $10 million Ansari X Prize and blazing the trail for SpaceShipTwo. Dozens of VIPs and journalists were here to witness today’s test flight, just as they were in October 2004.

Among those in the spotlight back then was Branson, who was so impressed with SpaceShipOne that he licensed the technology from Allen and his partners at Mojave-based Scaled Composites.

Today Branson paid tribute to Allen, who died in October at the age of 65 due to non-Hodgkin’s lymphoma. “Paul was an extraordinary man, and it’s very sad that he was not here,” Branson said.

Much has happened since then, and not all of it good: Three of the workers on the SpaceShipTwo project were killed in 2007 when a nitrous oxide tank blew up. And one of Scaled’s test pilots was killed in 2014 when the first SpaceShipTwo plane, known as VSS Enterprise, broke apart in midflight due to a cascade of errors.

“I found myself questioning seriously for the first time, whether in fact it was right to be backing the development of something that could result in such tragic circumstances,” Branson said at the time

It’s taken four long, tough years for Virgin Galactic to finish work on its second SpaceShipTwo and bring the flight test program its spaceworthy climax. And no one’s happier about that than Branson.

“This is the milestone we’ve been aiming for, for 14 years,” he said. “It was just a really, really upbeat, joyous day.”

Update for noon PT Dec. 13: Virgin Galactic tweeted out some amazing views from VSS Unity’s flight. Here’s how things looked from the cockpit, with the curving Earth visible through the front windows:

This video, captured by a camera on one of Unity’s wings, documents the gliding plane’s “victory roll”:

And here’s a picture looking back over VSS Unity’s shiny butt:

Our SpaceShipTwo traveling among the moon and stars ? ? ? pic.twitter.com/fDKdguHWoW