Seattle entrepreneur Rand Fishkin thinks it’s “so darn frustrating” that brands still use the number of followers an account has to determine which social media influencers will most effectively spread their message. He calls follower counts “a crap metric” in a blog post announcing a new tool to measure the influence of Twitter accounts.

Fishkin came to that realization by comparing his Twitter account to that of his wife’s. Seventeen years ago, Fishkin founded the Seattle marketing startup Moz. Over the years, as an evangelist for digital marketing, he’s amassed more than 400,000 followers on Twitter. His wife, Geraldine DeRuiter maintains @theeverywhereist, a Twitter account tied to her book and blog. She has more than 72,000 followers.

“From those numbers, you might assume that an average tweet sent from @randfish reaches ~5.17X as many people as a tweet sent from @everywhereist,” Fishkin writes. “That assumption is dead wrong.” 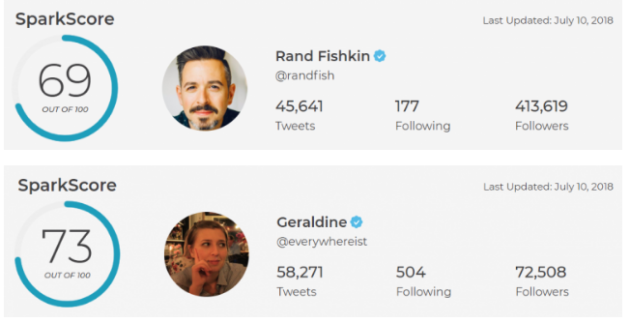 SparkScore is free “because our goal with it isn’t to make money directly, but rather to hopefully build some credibility,” Fishkin writes. SparkToro is still building out its paid product, which Fishkin says is 9-12 months from completion.

SparkToro isn’t the only one questioning the value of follower counts. Today Twitter is removing tens of millions of fake accounts to crack down on the practice of purchasing followers. Twitter users can expect their follower counts to decline as a result, particularly if they have purchased followers to inflate their influence.

Fishkin told GeekWire that he thinks the decision to remove those accounts is “a great thing.”

“I think it will make the network both more valuable and improve the signal [to] noise ratio,” he said.

Fishkin and his co-founder Casey Henry launched SparkToro in February after Fishkin departed from Moz. The startup has raised $1.3 million from 35 individual angels, avoiding a traditional venture financing round. Despite the cash infusion, SparkToro doesn’t plan to hire any employees or move into an office space in the next few months, choosing instead to keep costs low.

SparkScore is available for free to all Twitter users now. Fishkin is asking people to try it out and share what they learn from the experience.