TAYLOR’S TAKE ON THE WEEK IN SPORTS TECH: It’s shaping up to be an epic Masters in Augusta this weekend. 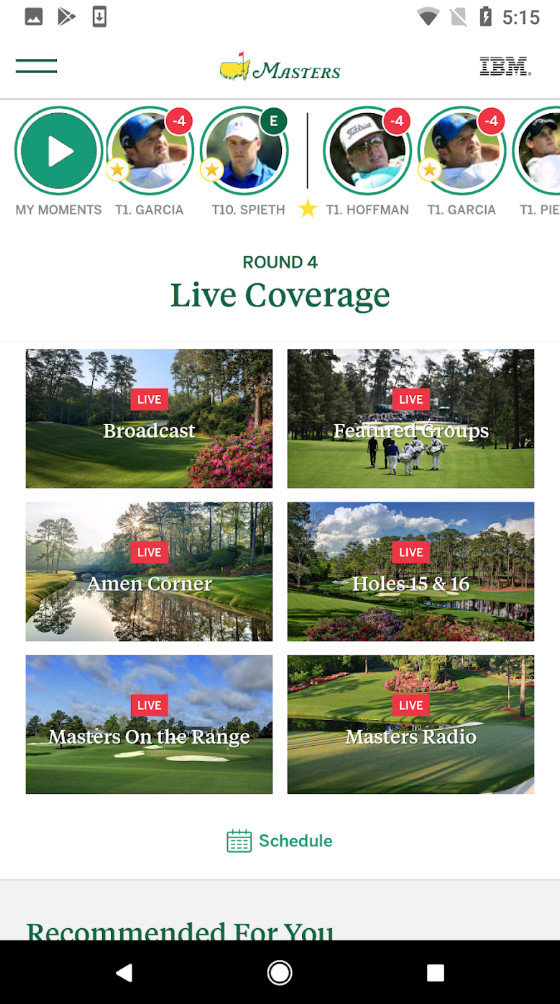 The annual pro golf major tournament is off to an exciting start, with 2015 champ Jordan Spieth jumping out to a first round lead after shooting a 6-under 66 on Thursday.

Patrick Reed, Rory McIlroy, Phil Mickelson, Rickie Fowler, and other stars are atop the leaderboard as well. All eyes are also on Tiger Woods, who shot a 1-over 73, as the legend miraculously finds himself back in the mix among golf’s elite again.

IBM powers the digital experience for The Masters, from Masters.com to the mobile apps for iOS and Android. New this year is “My Moments,” a personalized highlight reel that uses IBM’s Watson AI technology to serve up video based on your favorite players and the last time you’ve checked in on the tournament. It’s the first time IBM is using Watson at a major sporting event to deliver content to individual users through an app.

IBM also uses Watson to speed up the highlight reel production process. Watson’s computer vision algorithms identify what’s going on in videos — detecting loud crowd cheering or a player pumping his fist, for example — to automatically create highlight segments. This is particularly useful for a production staff at a live golf tournament, when there are 90 golfers playing around the course at the same time with multiple camera feeds capturing the action.

Also new this year at The Masters: shot-tracer technology. The TV broadcast will show the cool feature, which tracks ball flight, on hole No. 9, 10, 13, 15, and 18.

Thanks for tuning in, everyone!  — Taylor Soper