Stealing a sneak peek at the University of Washington’s new Burke Museum of Natural History and Culture is like looking at the mastodon skeleton in the old Burke Museum: It’s not fleshed out, but it gives you an idea how impressive the real thing can be.

The exterior construction part of the $99 million project is essentially complete, and the next phase — creating the exhibits and workspaces, and transferring an estimated 16 million objects from the Old Burke to the New Burke — will begin within just a few weeks.

To mark the transition (and kick off a fundraising campaign), the Burke’s staff gave journalists as well as museum members and donors a first look at the new building, plus a behind-the-scenes look at the collections in the 56-year-old building that currently serves as the museum’s home.

Julie Stein, executive director of the Burke Museum, said it’ll take until the end of the year to move everything out of the old building. She admitted to having mixed feelings about the move.

“Frankly, I hate that building, but as the time gets nearer, I’m getting more sentimental,” she said.

Stein promised there’d be a “massive party” at the Old Burke on New Year’s Eve.

“Now, a ‘massive party’ is a natural history museum massive party — so, you know, hopefully it’ll be a little bit of a party,” she said. “But it will be the last time the public can be in that building.”

Demolishing the emptied Old Burke and creating a courtyard and parking area will take months longer. The entire project is scheduled to be finished by the end of 2019.

As designed by Tom Kundig of the Olson Kundig architectural firm, the New Burke has two main entryways. The southeast corner’s upper entrance faces the UW campus, and the southwest corner’s lower entrance looks out onto 15th Avenue.

Thanks to a light-rail station that’s being built just a couple of blocks away, the lower entrance hall is likely to get more traffic. That’s where the mastodon, a whale skeleton and a bronze statue paying tribute to Coast Salish weavers are destined to be placed.

Visitors can climb a staircase (or take the elevator) to the upper lobby and a nearby gallery where they’ll be able to watch the Burke’s experts preserving specimens for future display. “We want visitors to see all of the places we work,” Stein said.

Another staircase soars upward several floors from the lobby, aiming toward a skylight in the roof. 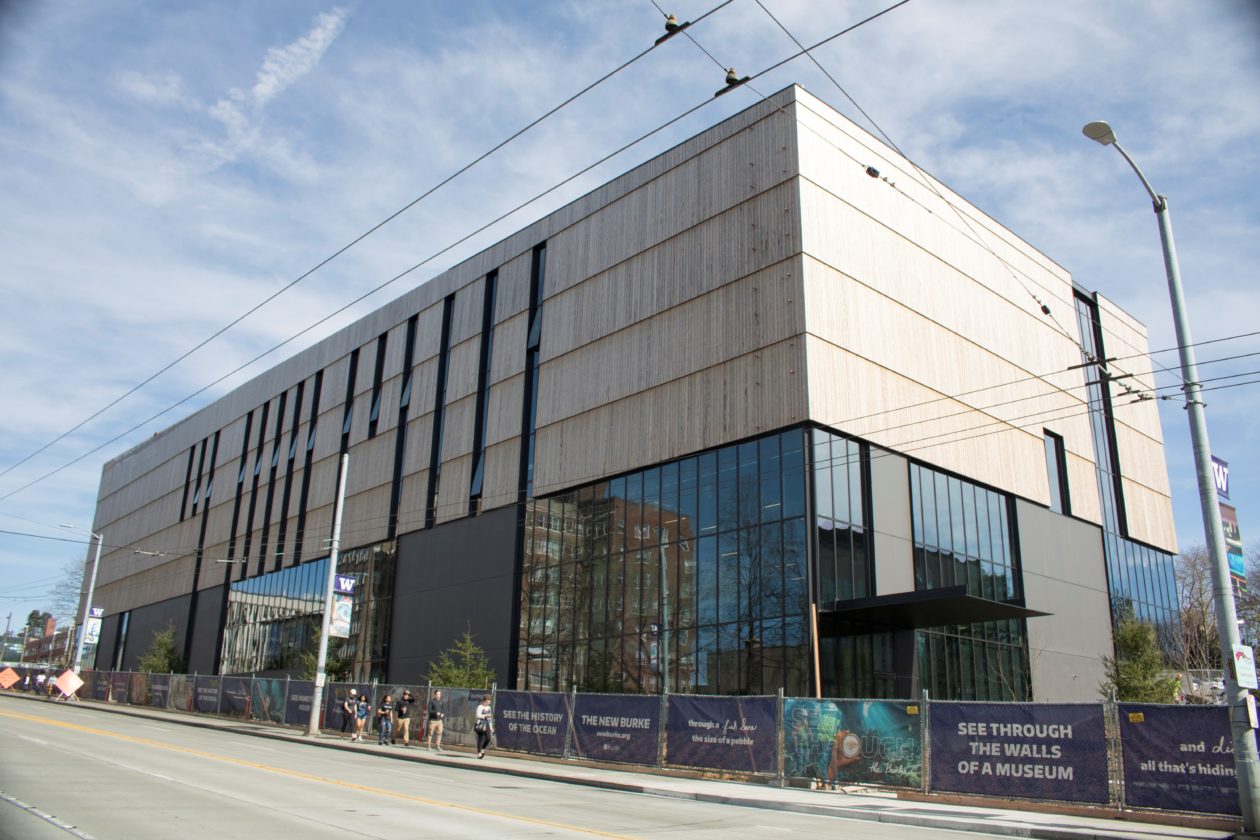 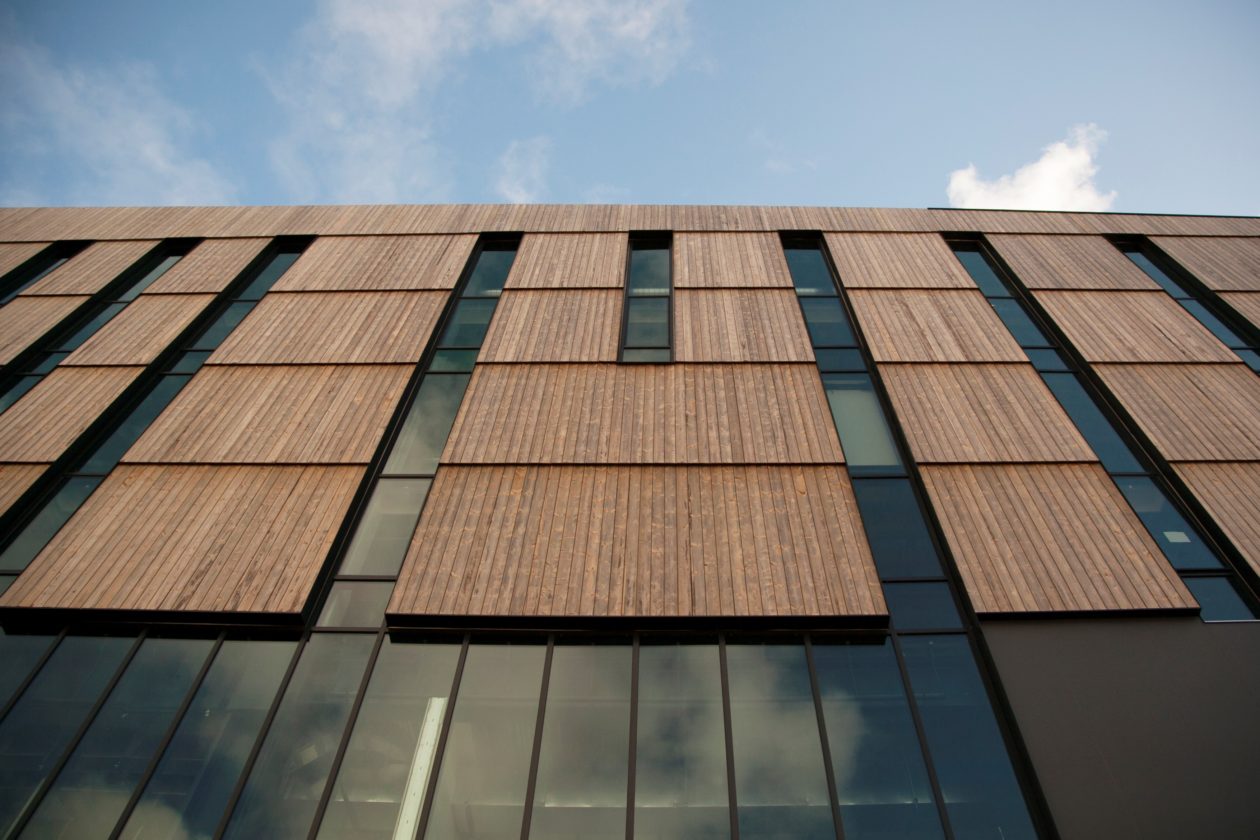 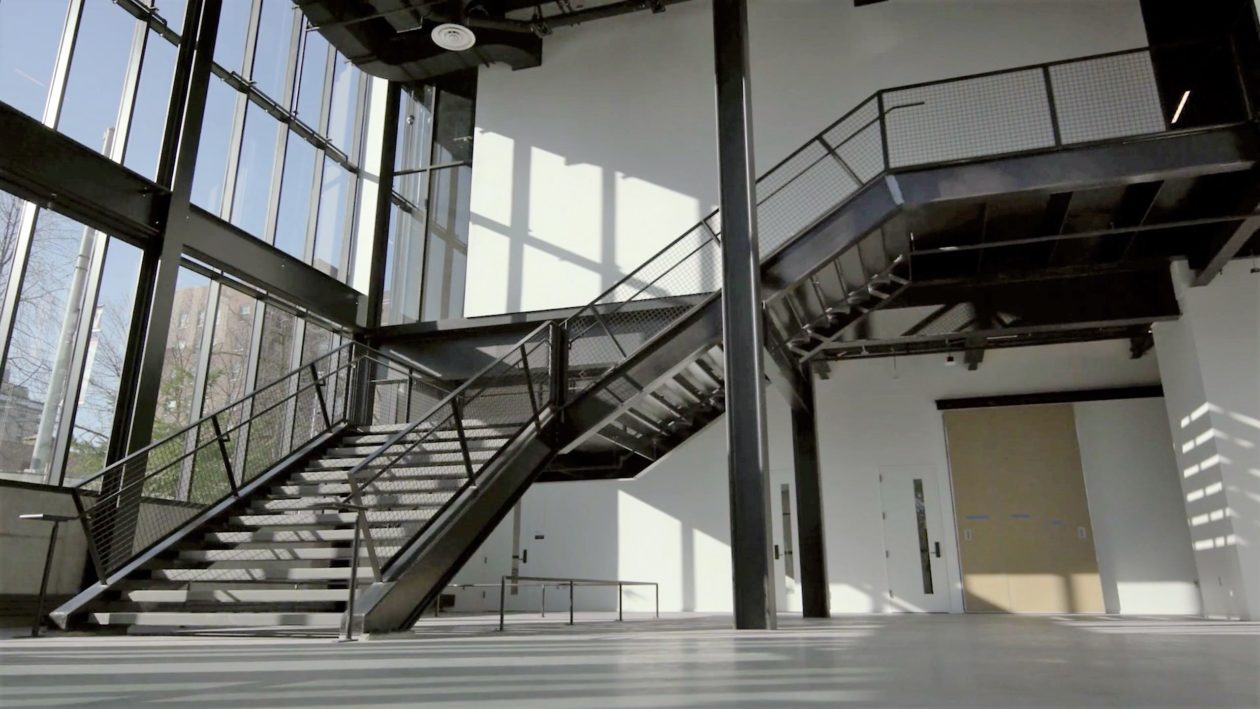 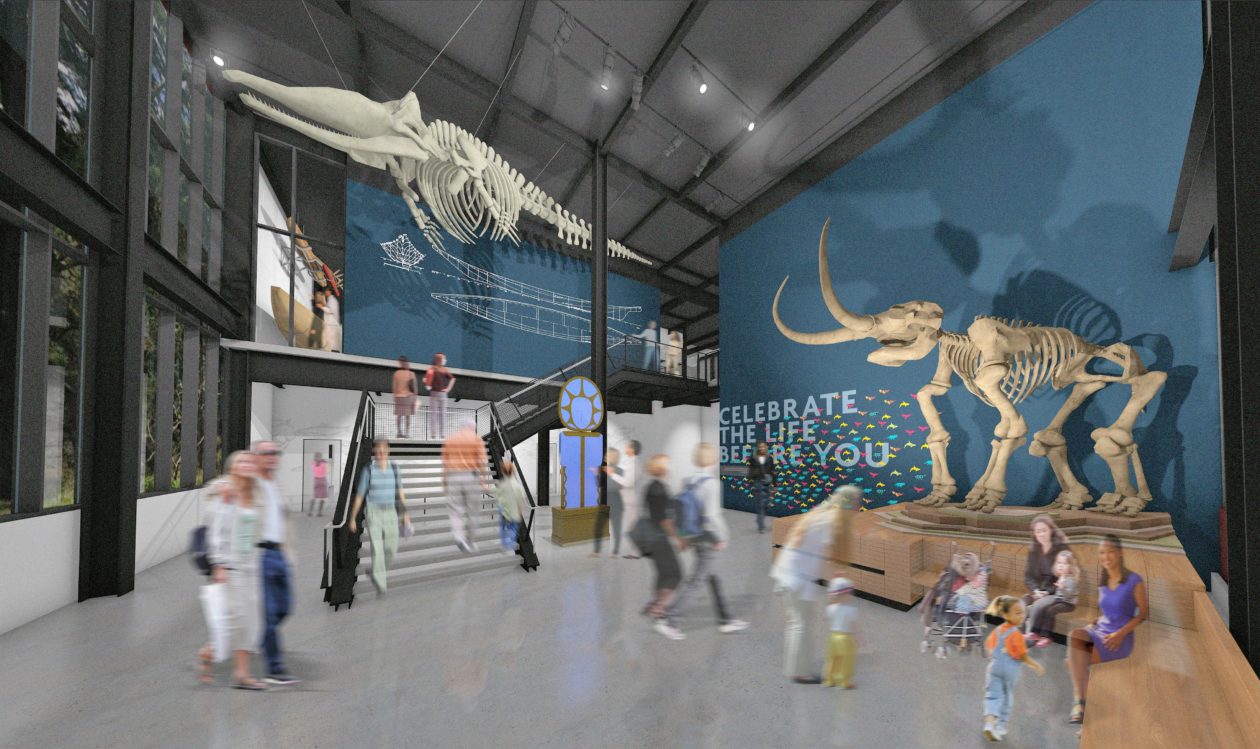 When the New Burke opens, it will feature a mastodon skeleton, a whale skeleton and a sculpture paying tribute to Coast Salish culture. (Evidence Design) 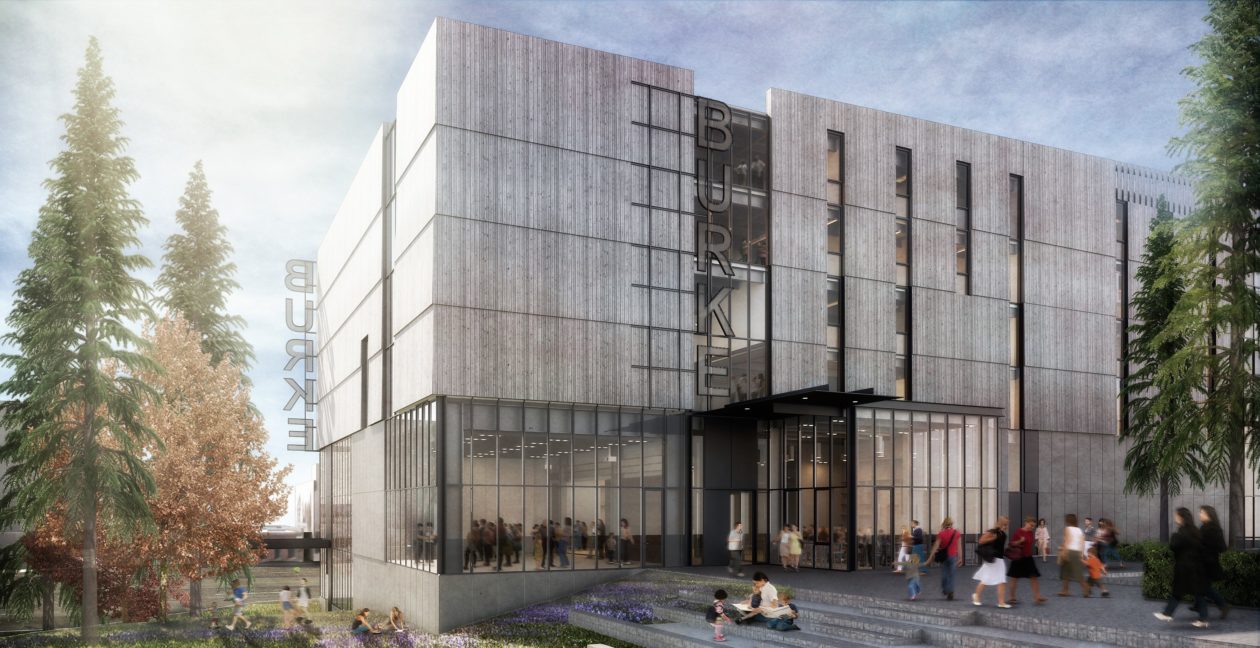 The New Burke’s courtyard and upper lobby entryway are on the campus-facing side of the building. (Olson Kundig Illustration) 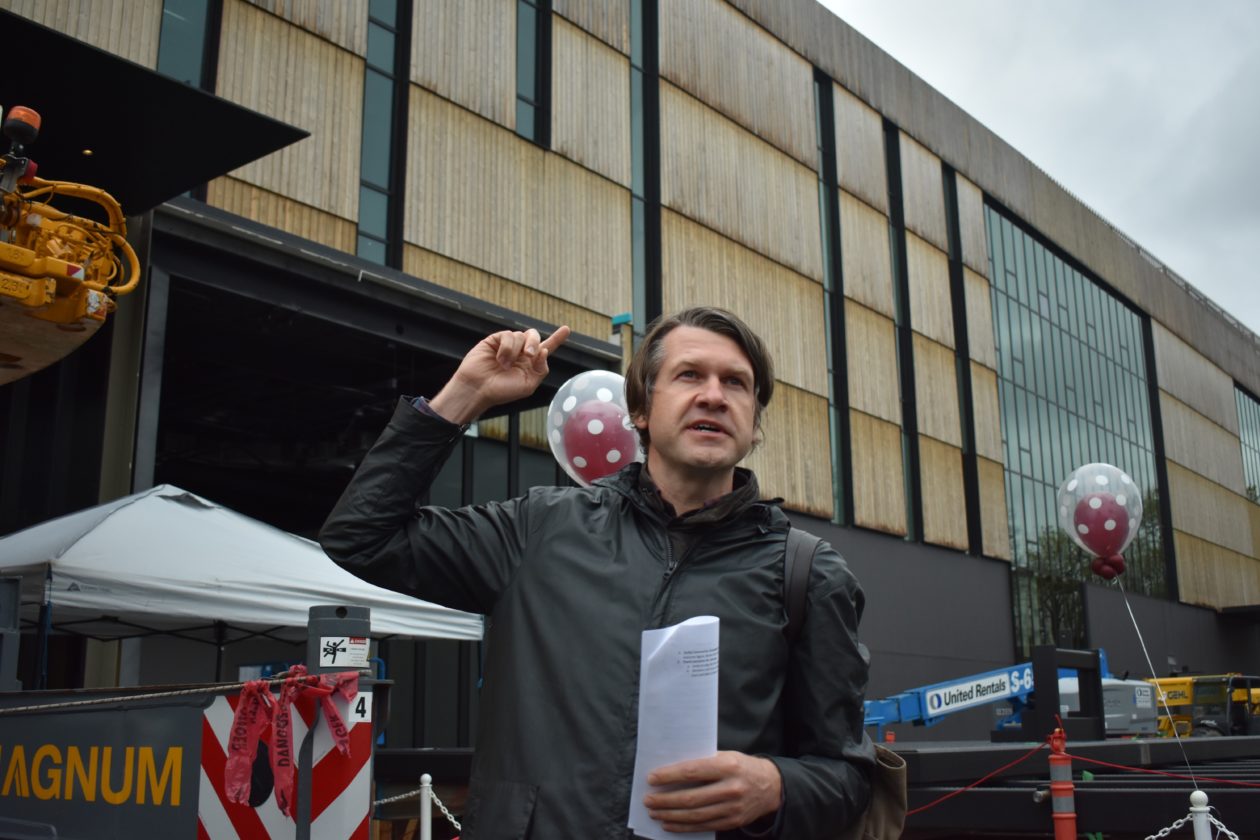 Project architect Edward Lalonde, a principal at Olson Kundig, points out that the slope of the New Burke’s roof reflects a 20-foot grade change from one end of the building to the other. (GeekWire Photo / Alan Boyle) 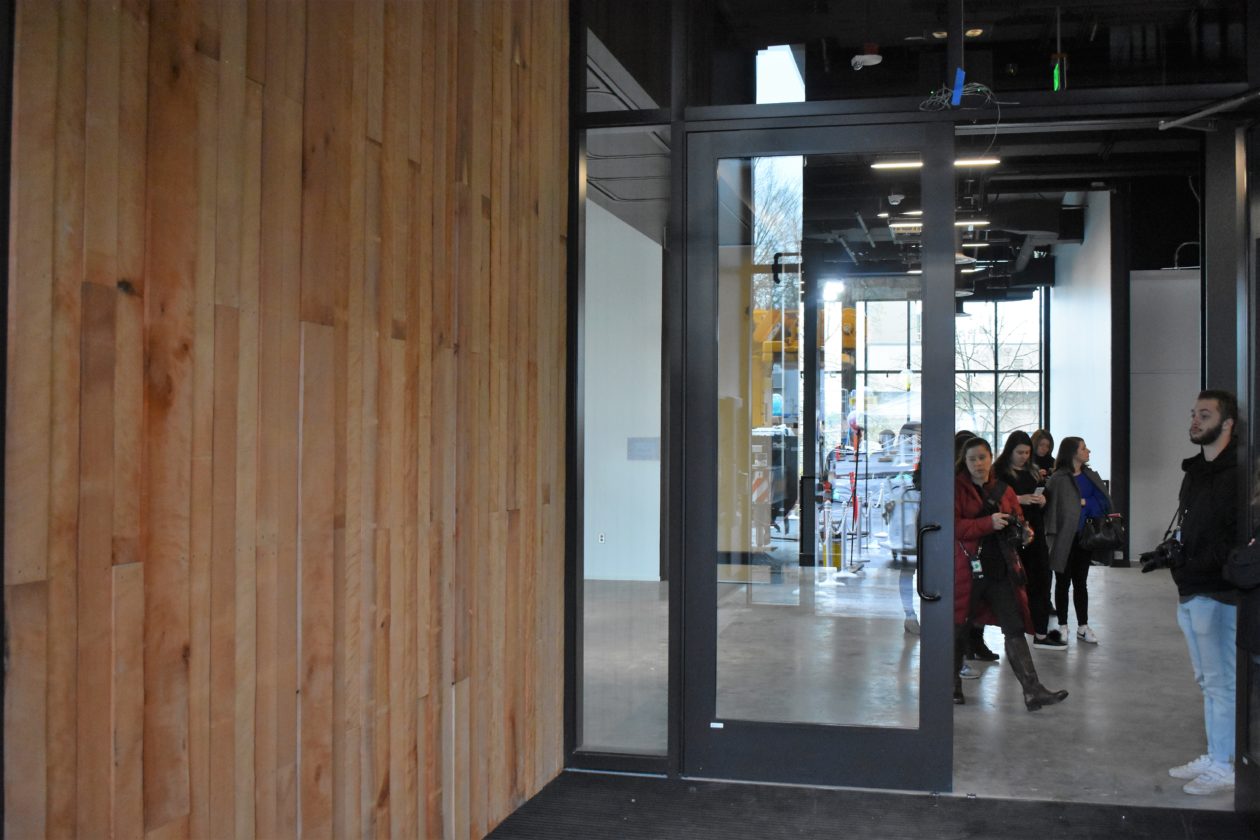 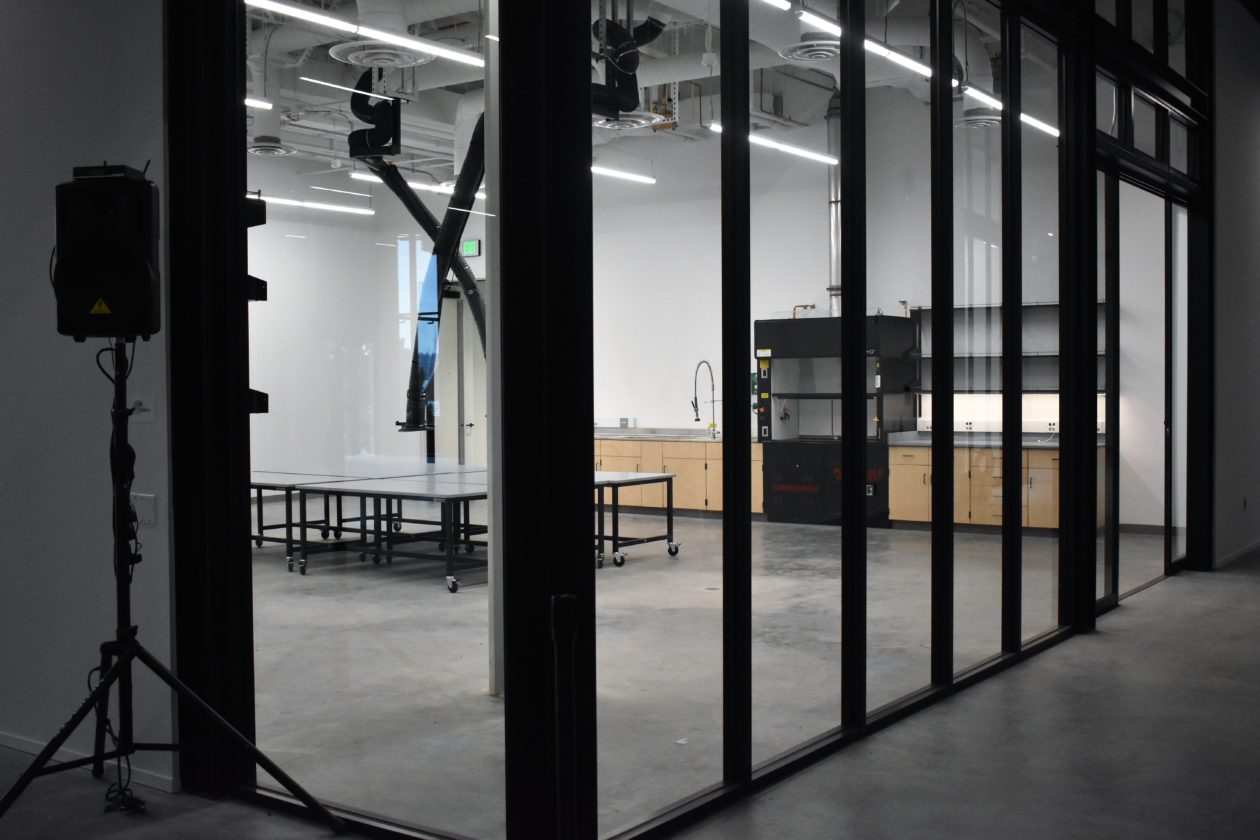 Near the upper lobby, there’s a glassed-in workroom where experts will prepare specimens while museumgoers watch. (GeekWire Photo / Alan Boyle) 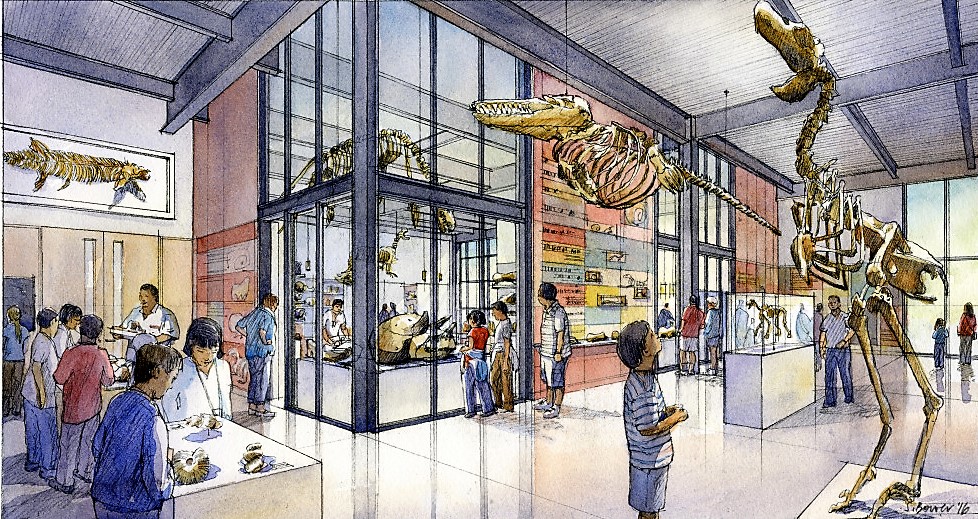 The see-through lab space will be a focus of attention when the New Burke opens. (Olson Kundig Architectural Illustration / Stephanie Bower) 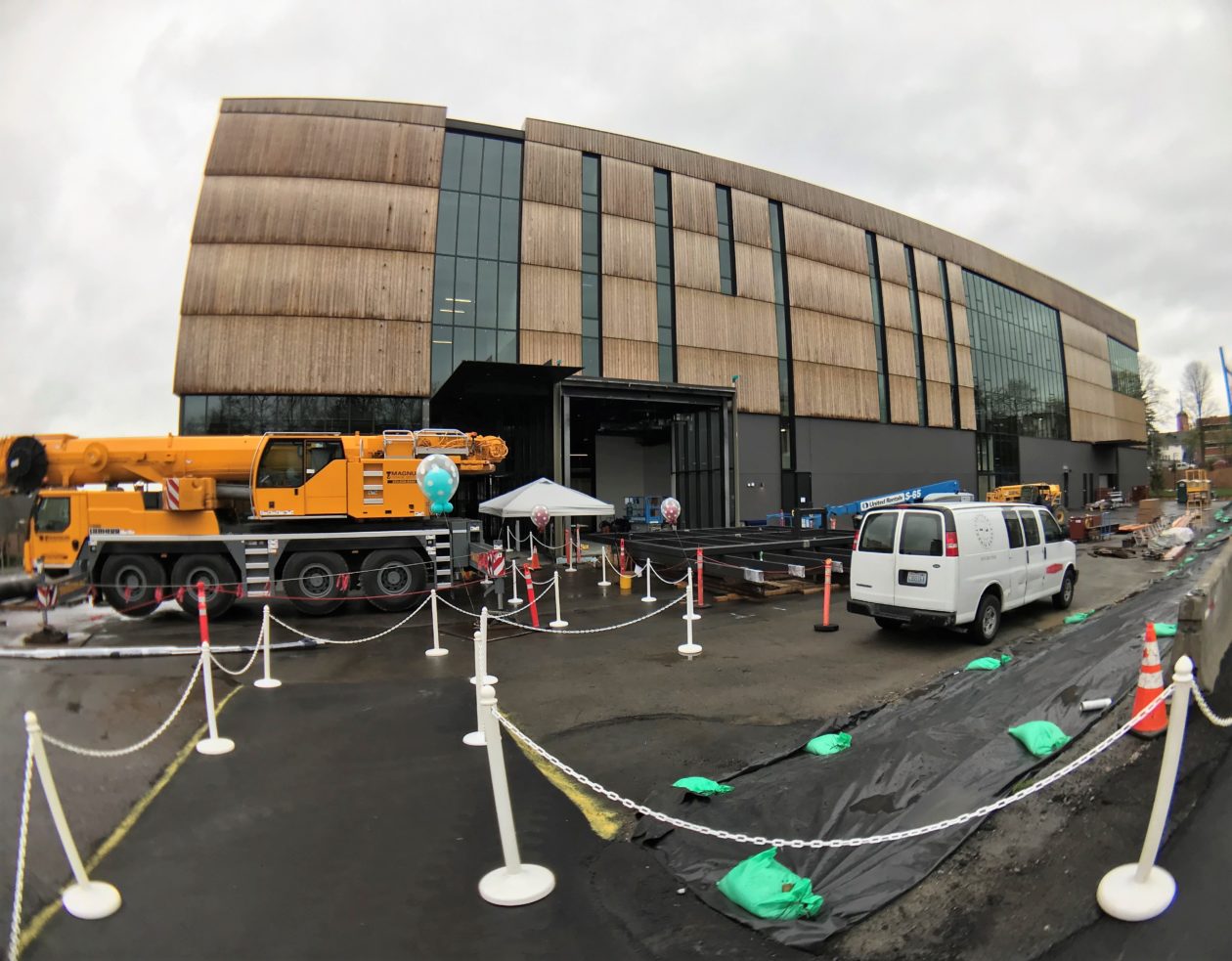 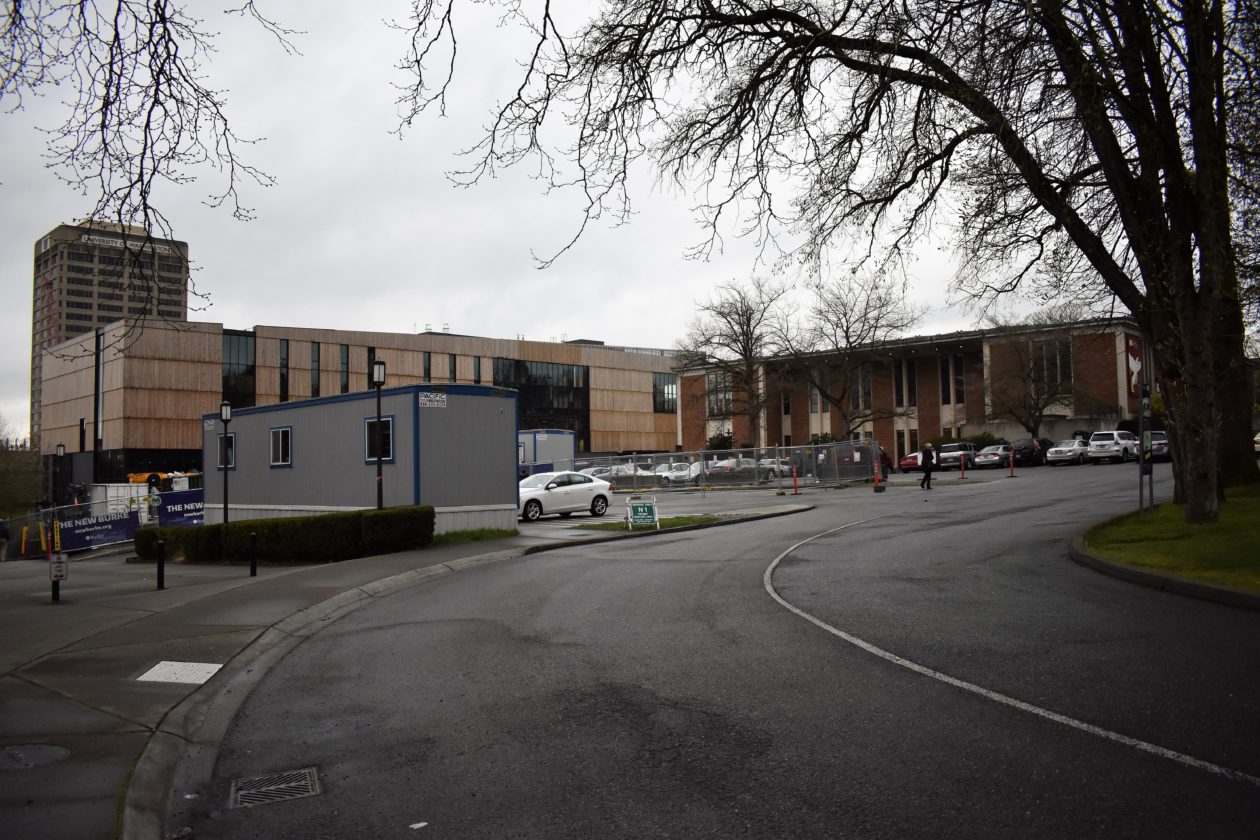 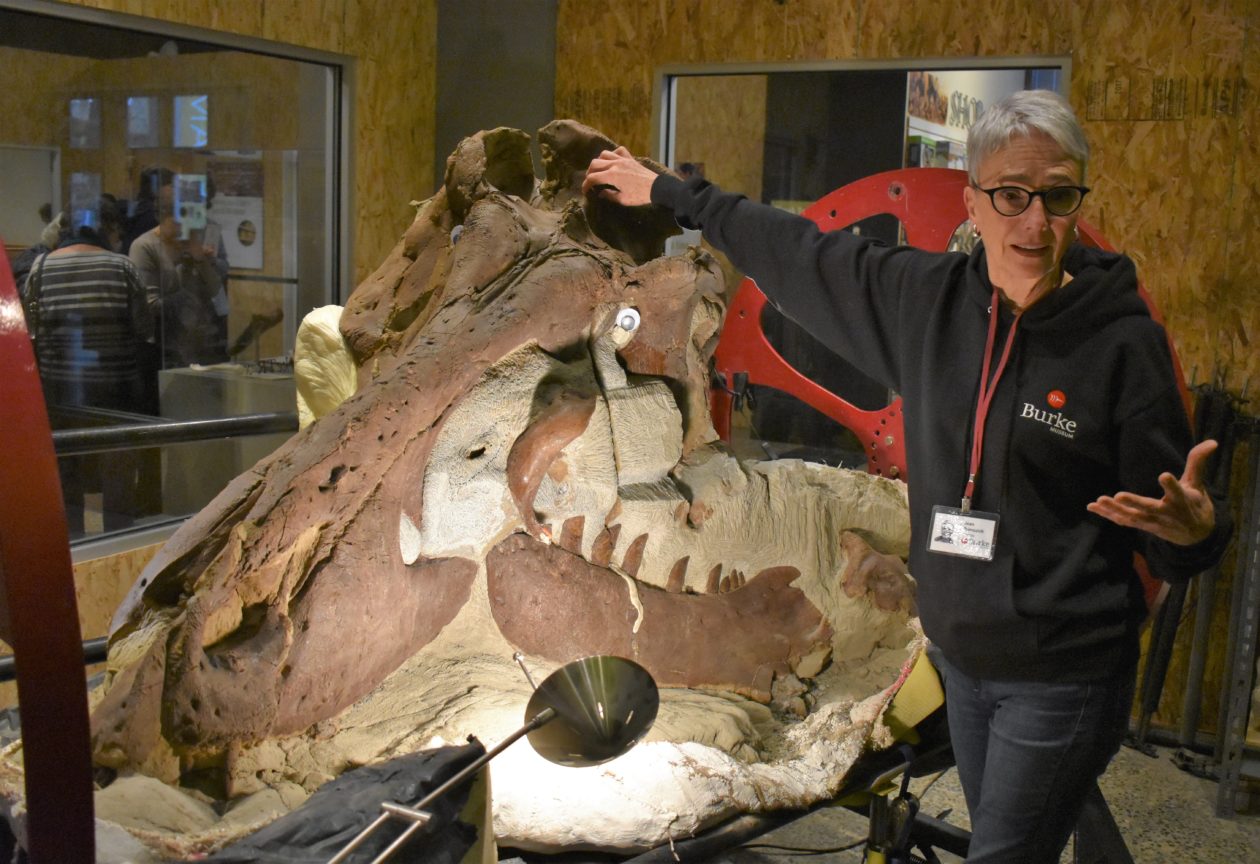 At the Old Burke, museum volunteer Jean Primozich shows off a Tyrannosaurus rex skull that’s being prepared for display. The googly eyes were added to help viewers get their bearings. (GeekWire Photo / Alan Boyle) 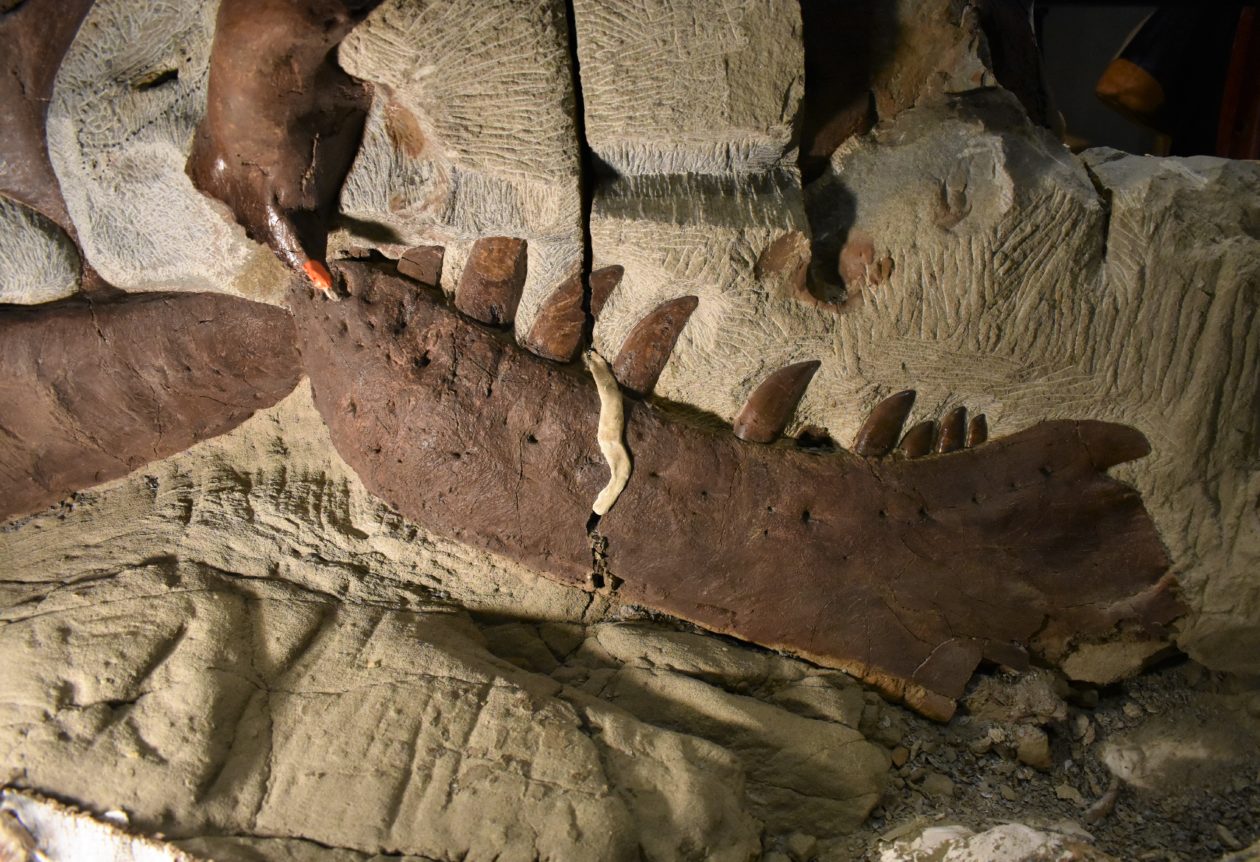 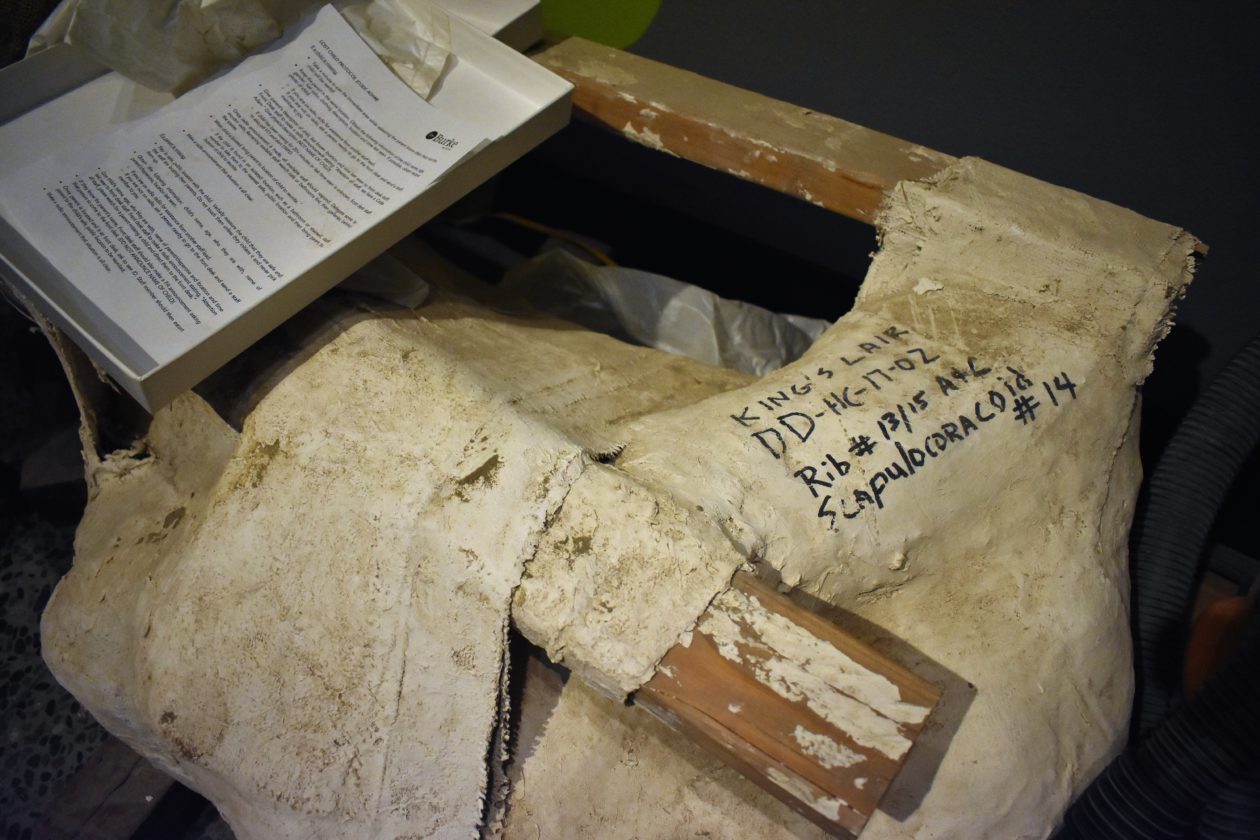 Dinosaur bones are wrapped in plaster to protect them before preparation. (GeekWire Photo / Alan Boyle) 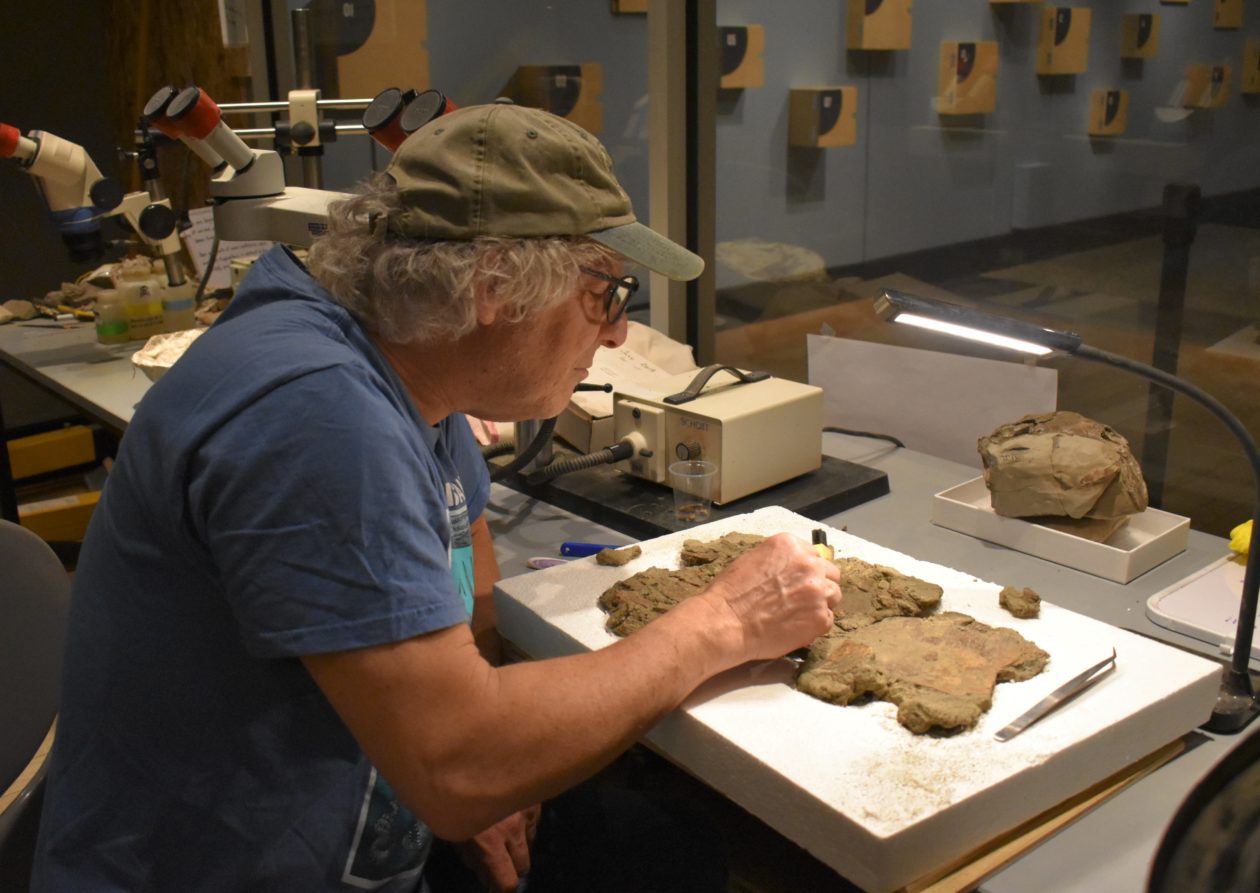 Fossil preparator Larry Friedman uses tools and brushes to remove bits of sand and rock from a flat layer of bones that were found near the T. rex. (GeekWire Photo / Alan Boyle) 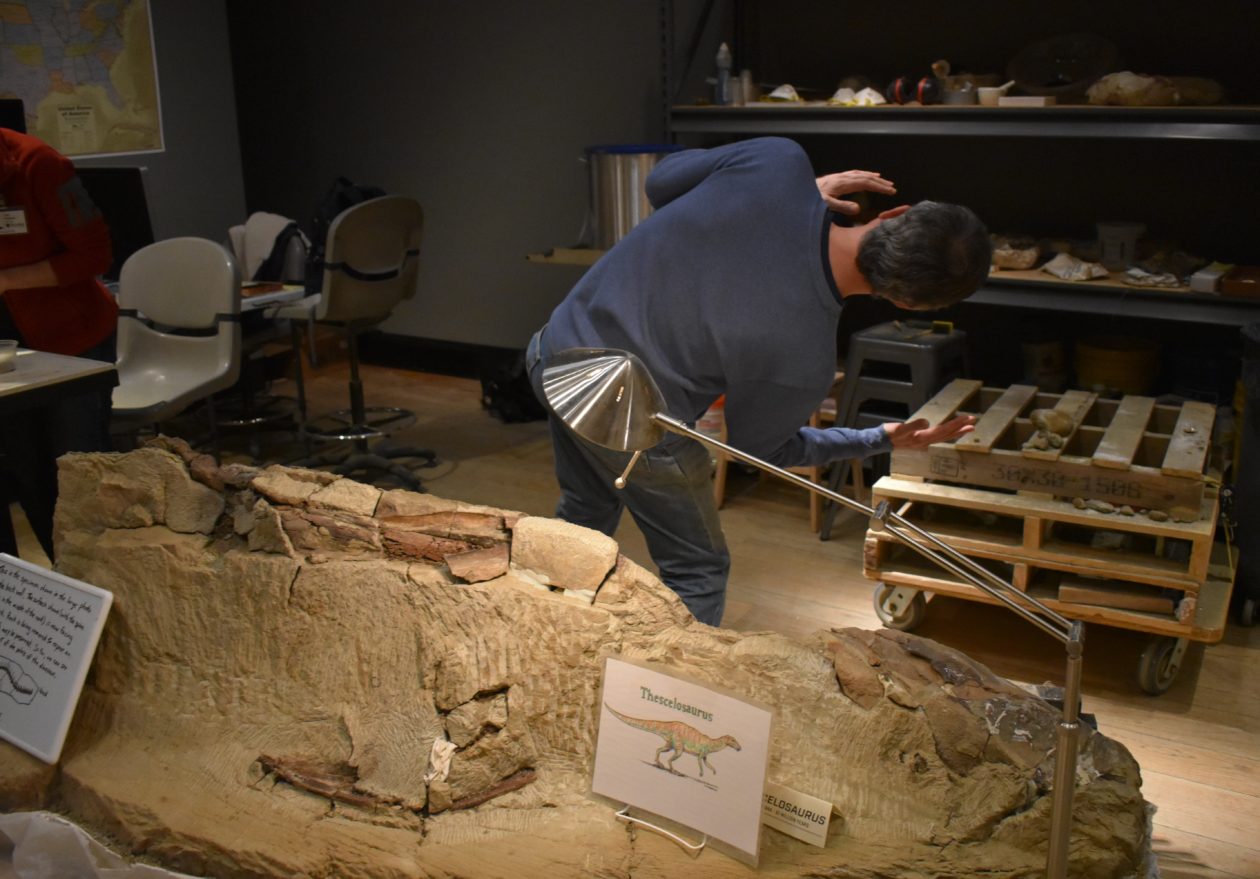 Fossil preparator Michael Holland strikes a pose that reflects the position of the thescelosaur bones embedded in the rock in front of him. (GeekWire Photo / Alan Boyle) 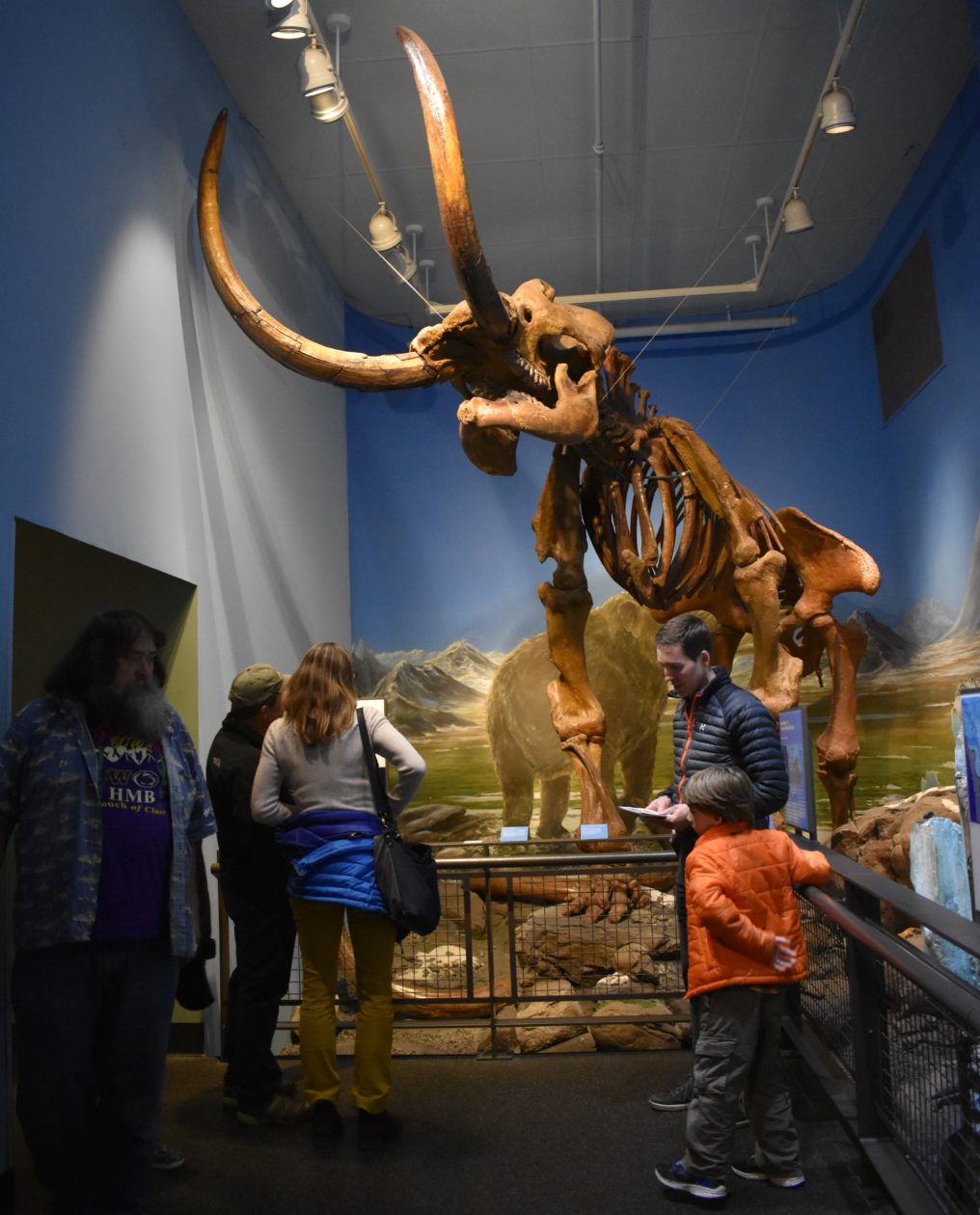 Wooden building materials play a prominent role in the decor, inside and out, as befits a Pacific Northwest museum. The upper entryway features rough-hewn planks salvaged from a downed madrona tree. A field of purple-flowered camas plants will be planted outside.

Stein made sure to point out where some of the 18th-century wood paneling from the Old Burke’s cafe will be re-installed, in a prominent space just off the upper lobby.

“It was the No. 1 most frequently asked question of every single person we talked to: ‘What are you going to do with the paneling from the Burke Cafe?’ ” she said.

The New Burke should provide more of everything for museumgoers: more space for the restaurant, more stalls in the restrooms, more specimens on display, and more opportunities to see the Burke’s preparators working on specimens.

The piece de resistance could well be the T. rex skull that’s emerging from a huge chunk of sandstone in the Old Burke’s glassed-in lab. In 2016, the skull and other bones from the “Tufts-Love Rex” were transported from the Montana quarry where they were found to the museum. Since then, the preparation team has exposed most of the top half of the skull.

“We need to flip this and get to the other side of the skull,” said Greg Wilson, a UW biologist who serves as the Burke’s adjunct curator of vertebrate paleontology. A “T. Rex Rotisserie Rack” was custom-built to facilitate the flip.

Wilson said he and the rest of the team are working steadily to get the skull in shape for public display when the New Burke opens next year. “We’ve all tried to think not too much about what we have to do to transport it,” he said.

There are plenty more bones where the skull came from, and some of them are stacked up in the Old Burke’s lab, waiting to be freed from their protective shells of plaster and rock. Even though Wilson isn’t looking forward to the move, he’s looking forward to getting settled in the New Burke.

“We have a lot more stations for people to work,” he said.

And that means more opportunities for visitors to see how the Burke works as well.