Play Impossible started with a simple thesis: the internet-of-things world had lost a sense of joy and fun. So its founders went to work, creating a sensor-infused smart inflatable ball that links to a smartphone app and lets people play different physical games.

Now the Seattle startup has landed a retail deal with Apple; inked a partnership with the NFL Players Association (NFLPA); discovered demand in an unexpected market; and raised more venture capital dollars to fuel its growth. 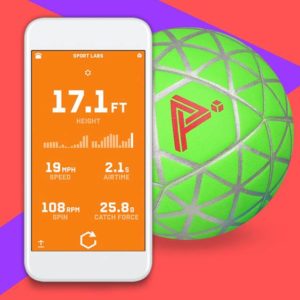 It also has a new strategic investor: OneTeam Collective, the business accelerator arm of the NFLPA that launched two years ago.

OneTeam Collective doesn’t invest cash in companies. Instead, its members — current and retired NFL players — partner with startups and exchange their clout for equity.

Founded in 2016, Play Impossible sells a small rubber ball that looks normal from the outside but has a bevy of electronics inside — accelerator, barometer, microcontroller, ultracapacitor, etc. — and sends real-time movement and impact data via Bluetooth to the accompanying app. Players of all ages can compete in games like “virtual water balloon toss,” “hot potato,” or “rally.”

“As a professional athlete and a father, Play Impossible and Gameball is an exciting game option that connects kids’ passion for tech with the amazing benefits of physical activity — the one-of-a-kind game system combines learning, having fun and staying healthy,” New York Jets offensive tackle Kelvin Beachum, who is also a OneTeam Collective athlete board member, said in a statement.

Houston Texans wide receiver Braxton Miller will become an ambassador for Play Impossible. He likes to play with his son and called the games “fun, innovative and mentally challenging.”

“Bringing in pro football players is just going to raise the experience to another level and encourage more kids and adults to stay active and take advantage of the powerful combination of sports and tech,” Miller added in a statement.

Play Impossible previously sold its $99 product with retailers like Target and Amazon Launchpad. But it is now exclusively available inside Apple Store locations across North America and on Apple.com, along with the company’s website.

“It’s a place where people can come touch and play with the Gameball,” said Play Impossible CEO Brian Monnin. “In a few seconds, you fall for it.”

Monnin declined to provide details about the business deal with Apple. He noted that the startup found it difficult to market itself with traditional retail distribution channels.

Play Impossible will also use part of the fresh funding to go after a market it didn’t previously target: education.

Teachers at middle and high schools have shown strong interest in the Gameball — and more importantly, the accompanying data. They are using the games as a way to introduce algebra and early physics concepts to students.

“It happens to be a fantastic recording device,” Monnin said, adding that it’s “definitely something I put in the happy accident category.”

Play Impossible plans to develop new games and products with the new capital and partnerships. It recently rolled out compatibility with Apple TV devices. The company, which was nominated in the Hardware of the Year category at the GeekWire Awards, employs less than 10 people in Seattle. It works with local sporting goods company Baden Sports to manufacture the Gameballs.

Monnin previously worked at Intel and Microsoft before founding Play Impossible with Chief Product Designer Gadi Amit, who leads NewDealDesign, a firm that helped design products for FitBit and Google; and CTO Kevin Langdon, a long-time engineer who was previously CTO of AirCare Labs.