In the first Seahawks home game since Paul Allen passed away, the NFL franchise honored its late owner with a tribute video and special 12th Man flag raising before Sunday’s game against Los Angeles. 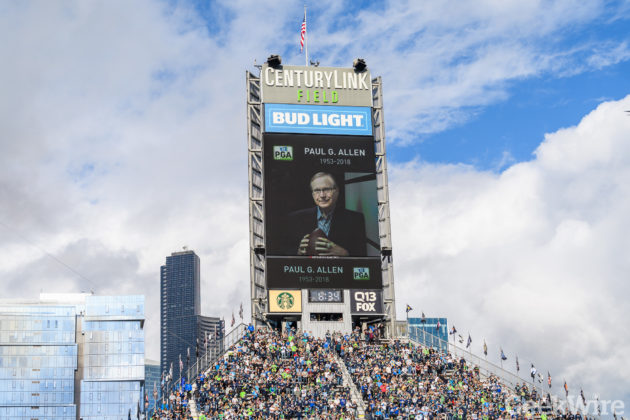 Allen, the Microsoft co-founder who died on Oct. 15 at the age of 65, purchased the Seahawks in 1996, effectively saving the team from leaving town. He owned the franchise for more than 20 years, guiding the Seahawks during their most successful stretch in team history, winning three NFC championship trophies and bringing home the Lombardi Trophy as Super Bowl champs in 2013. 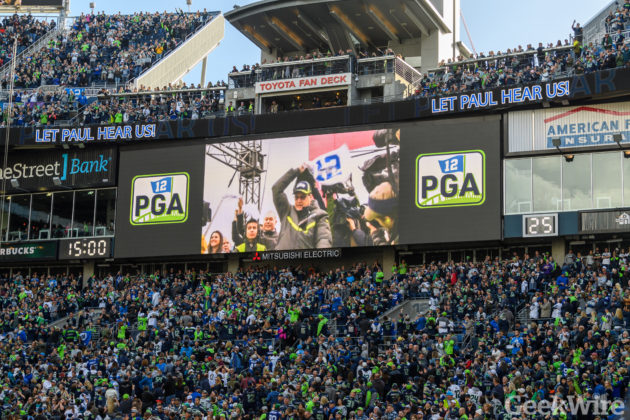 On Sunday at CenturyLink Field — a stadium that wouldn’t exist without Allen — “PGA” logos were painted on the field, a nod to Allen’s initials. There was a moment of silence and the team also played a video on the big screen featuring interviews with people including Microsoft co-founder Bill Gates, Seattle Mayor Jenny Durkan, Seahawks head coach Pete Carroll, and others who remembered Allen as an invaluable leader for both the Seahawks and the city of Seattle. 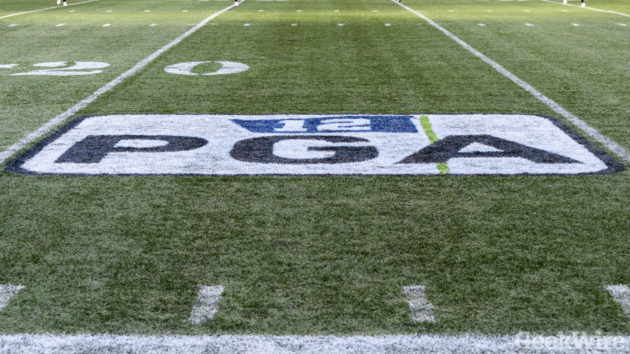 Minutes later, as part of the 12th Man Flag Raising tradition before kickoff, the team raised the flag to half-staff while playing an old video of Allen waving a towel and pumping up the crowd at a previous game. More than 60,000 fans in attendance roared, saluting the longtime owner. 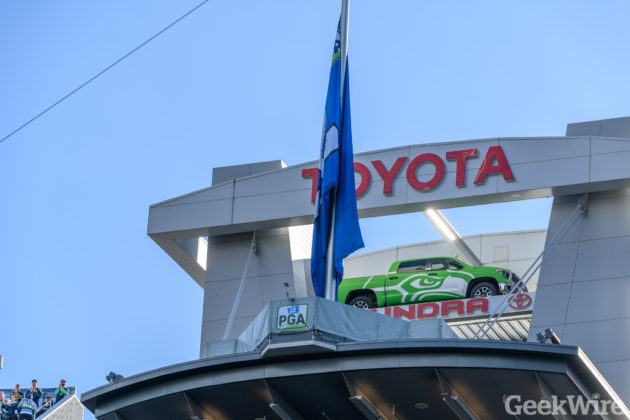 The gameday program and other visuals around the stadium also paid tribute to Allen.

“We love the spirit that he stood for and what he brought to all of us,” said Carroll, who arrived in Seattle eight years ago. “He affected all of us, everybody in this place was affected by Paul Allen and his wisdom and his charity and his love for this area.”

“Go Hawks,” Wilson said in his usual press conference sign-off, before adding something special this time: “Miss you, Paul.”

Allen, who attended most Seahawks games both home and away, bought the team for $200 million in 1996. As he wrote in his autobiography Idea Man, Allen purchased the Seahawks less so as a way to make money and more out of “allegiance to the city,” Q13 reported.

Allen, a Seattle native who helped launch Microsoft in 1975 with fellow Lakeside School graduate Bill Gates, wasn’t actively looking to purchase the team from disgruntled owner Ken Behring, who had temporarily moved the Seahawks to Southern California. But Allen said he’d commit to buying the franchise in 1996 if voters passed a measure to help fund the construction of CenturyLink Field.

As part of a celebration for Allen’s 20th year of ownership, the Seahawks published a four-part series on its website last year that details how his leadership style helped create a winning culture within the franchise and a positive impact on Seattle itself. Allen was frequently seen in the locker room after games. In 2015, Seahawks general manager John Schneider told 710 ESPN that he compiles a report after each game for Allen.

He affected all of us, everybody in this place was affected by Paul Allen and his wisdom and his charity and his love for this area.

While his decision to buy the Seahawks wasn’t totally money-driven, Allen’s investment in the Seahawks turned out to be more profitable than his ownership of Microsoft, according to a Bloomberg report from 2014. Plus, he was able to enjoy a Super Bowl win — his band played at the Seahawks Super Bowl celebration party — and be involved with a team now valued at $2.5 billion.

It’s unclear what will happen to ownership of Allen’s sports franchises. Sports Business radio reported that both the Trail Blazers and Seahawks will likely be sold by the Allen estate, citing anonymous sources.

NFL Commissioner Roger Goodell, speaking at the league’s 2018 fall meeting last month, said there hasn’t been any immediate discussion about the future of the Seahawks ownership.

“We think it is inappropriate at this point in time to be having those kinds of discussions,” he said. “The Seahawks have made plans. Paul Allen had made plans. At the appropriate time, those plans will be discussed.”

Buildings and landmarks across the Seattle region, including CenturyLink Field, are lit up in blue this weekend in honor of Allen. Read the story behind this tribute, and read about Allen’s life and legacy here.