Buildings and landmarks across the Seattle region are lit up in blue this weekend in honor of Paul Allen, the late Microsoft co-founder.

These images from Alki Beach in West Seattle, captured by GeekWire’s Kevin Lisota, show the downtown Seattle skyline in blue, and the initials “PA” in lights on the Russell Investments Center from across Elliott Bay.

Here’s the perspective from the Jose Rizal Bridge, putting a different hue on the view from a classic Seattle photo location.

The tribute stretched across the region, to the Eastside and T-Mobile headquarters in Bellevue, Wash., where GeekWire’s Alan Boyle took this photo.

Other structures involved in the coordinated tribute include the Space Needle, the Great Wheel, Microsoft’s City Center Bellevue building, the Amazon Spheres, and CenturyLink Field, where Allen’s Seattle Seahawks will take on the San Diego Chargers on Sunday in the first home game since Allen died Oct. 15.

Nearby, Paul Allen’s Living Computers: Museum + Labs is lit up in blue, as well. 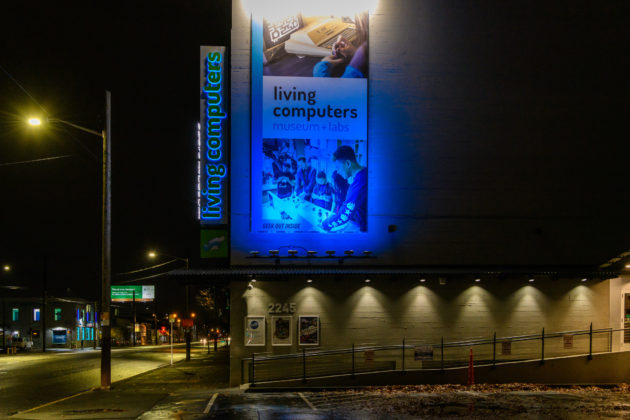 The effect is especially stunning at the Paul G. Allen School of Computer Science and Engineering at the University of Washington, home to the computer science and engineering school that also carries Allen’s name.

Even the Smithsonian Institution is taking part.

This weekend, the Seattle skyline is glowing blue to honor the life and accomplishments of Paul Allen. Following Seattle's lead, we will be illuminating SpaceShipOne, the privately developed space vehicle funded by Allen, in blue light. https://t.co/mHan93tZHQ pic.twitter.com/WkFCPqpjMP

Read the story behind this tribute, read about Allen’s life and legacy, and see below for more scenes from around the Seattle region, via Twitter.

Paul Allen left an unforgettable mark on the greater Seattle community. We are proud to be able to honor his legacy at @TMobile HQ. pic.twitter.com/hEZDqeipUC

We’re proud to join organizations around the state in honoring @PaulGAllen by turning @UWCSE blue and lighting up the UW Tower for Seattle’s 12th man. #ThanksPaul pic.twitter.com/AEZgBRlt2x

The Virginia Mason Athletic Center is part of a number of Pacific Northwest landmarks, buildings, and institutions that will be illuminated blue tonight and tomorrow in honor of @PaulGAllen. pic.twitter.com/fteL6BWkRv